The Forex market has lacked directional volatility as most major currency pairs are trapped in ranges. Traders expect a more volatile market in March.

February 28, 2019| AtoZ Markets- Last year was volatile for the currency market as the greenback had a good time and gained across the board. The US economy had a very buoyant economy supported by strong economic data throughout especially in the first three quarters of 2018. EURUSD, the most traded currency pair, dropped more than 1300 Pips from 1.255 in January 2018 to 1.1215 in November 2018. Commodities like Gold and Silver also saw high volatile moves. Australian and New Zealand dollars also plummeted in a wildly volatile and trendy market that lasted for more that ten months. Euro was rooted to the downside after three of its four largest economies experienced major economic woes.

There were expectations coming into 2019 that the Dollar would be under severe bearish pressure after the unsettled US-China trade war casted doubts and uncertainties on investors. The US Federal Reserves' moves to hike interest rate in December quickly offset the supposed bearish pressure from the US-China trade negotiations. The trade war truce between the two largest economies also came into the picture and the Dollar swinged up and down within a small range. However, the Dollar would soon fall under bearish pressure in 2019 after the Fed came soft on trade hikes in 2019. Other major central banks also came with their own version of dovishness and the range-bound volatility contines. 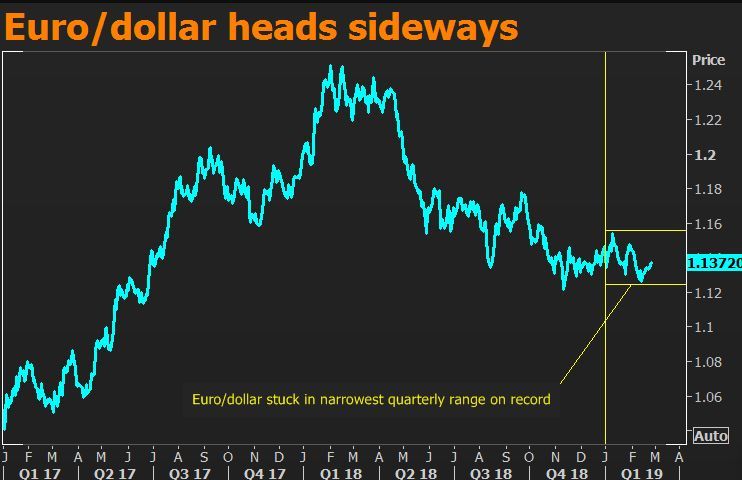 The story is similar for other currency pairs. The Dollay Yen has also seen decreased volatility since the last quarter of 2018. So are Aussie Dollar and NZDUSD. Even the Pound Dollar which saw a big move in December after the House of Commons' overwhelming rejection of PM May's Brexit proposals and the Canadian dollar which benefitted from a falling crude price in the last quarter of 2018 , have lost a substantial part of their volatilities. According to Deutsche bank's currency volatility index below, the currencies are having plummeting volatilities in 2019. 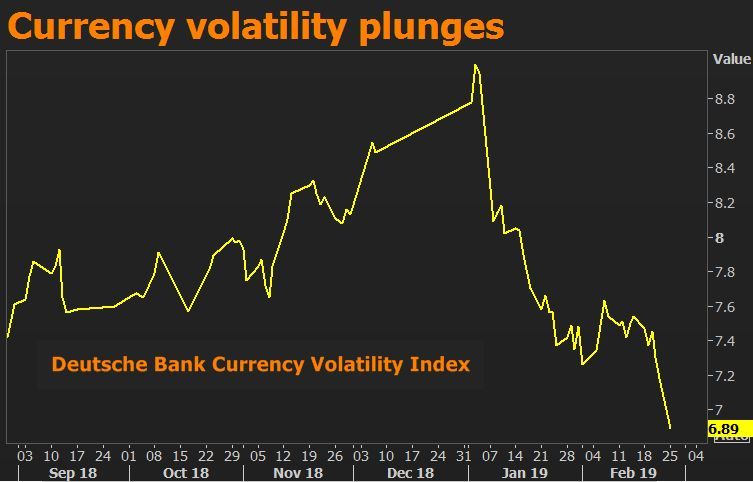 Will volatility improve in March?

There are expectations that the last month in this quarter will improve. The series of events coming up in March could cause high volatile swings and set currencies up for a lasting directional trend. The Brexit, U.S, Eurozone and Japan central bank meetings are some of the events traders will look up to in March. The barrier of uncertainties caused by the current US-China trade dispute is also expected to be lifted. However, the effects of each of these events could still offset the other and prices remian in ranges. Nevertheless, traders should still hope for an increased volatility in March.