After dropping to 1320 last week, Gold has stayed sideways between 1330 and 1320. The following looks at what could happen next based on Elliott wave theory.

February 27, 2019| AtoZ Markets – Gold lost close to 2% last week after it dropped from 1347 to 1321. Since this drop, price has remained sideways after a minor recovery to 1333 could not be sustanined. Gold is pricing in and adjusting to a possible US-China successful trade negotiation after the truce signed last year was extended beyond 1st March. The Fed is also holding its stance of the rates and the Dollar is getting stabilized after weaknesses across seen across the board early this month.

The yellow metal started this week around 1332. It lost almost 90 Pips between Monday and Tuesday in a relatively quiet mood. After the dip, it rallied back to 1327.Currently, it trades around 1327 and the nature of its move in last 3-4 days is completing a sideway triangle pattern. If price breaks in the direction of last week dip, we would see lower prices this week or early next week.

The long term Gold Elliott wave analysis we have followed since last year suggests further rallies to 1360-70 after price advanced with an impulse wave from 1160. In January, the bullish run continued and price hit 1326 early February before a corrective dip to 1302 mid-February. The dip however was shallower than expected for the 4th wave of the bullish impulse wave from 1160. Price eventually broke above 1326 and gained 200 pips more to hit 1346 which was its highest in nine months. The dip that followed from 1346 was expected to continue to 1329-1324 support zone as the chart below shows. 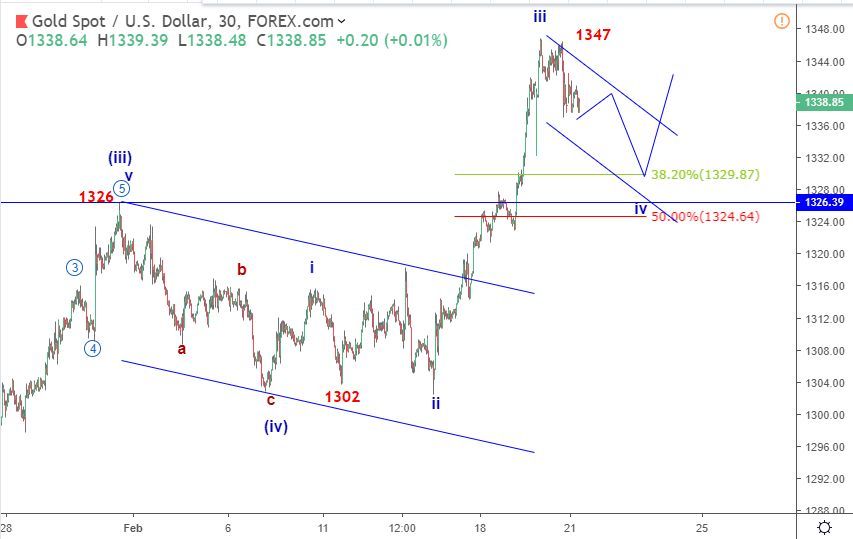 Price dropped below this zone and goes sideways suggesting the dip could even go deeper close to 1302-1300 support zone. The chart below shows the new update. 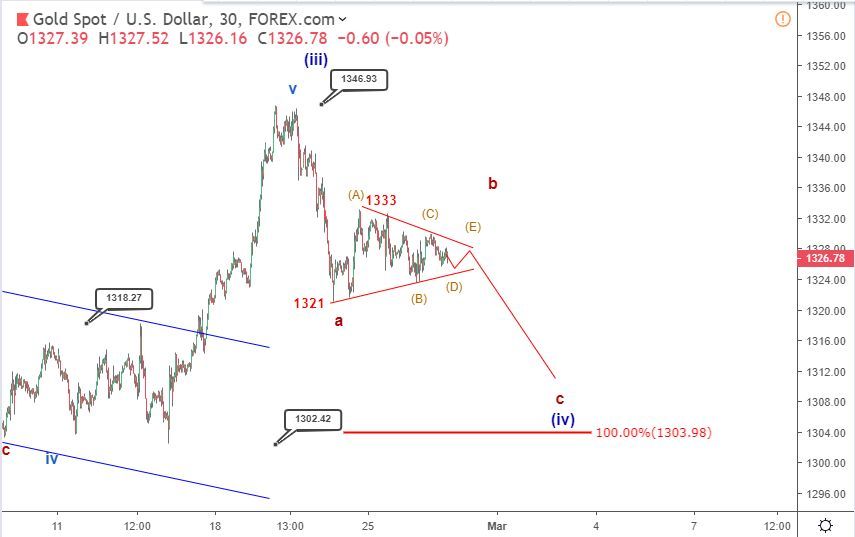 Between 1321 and 1333, price is completing a bearish triangle pattern. This indicates further bearish run – probably the 4th wave of the bullish trend from 1160 now coming up. A dip into the 1318-1302 territory is very likely especially if price breaks below the intraday sideways triangle pattern. The ultimate bearish target is zone is at 1308-1304. The bears will run deeper if price breaks below 1302-1300 significant support zone.