Get VIP Trading Signals Market Watch
Trade Now Your capital is at risk.
EURUSD is heading back to 1.1250 after unimpressive manufacturing PMIs from the Euro-zone. The following share insights based on Elliott wave theory.

April 01, 2019. AtoZ Markets - There is a series of data coming later today, which might have short term impacts on the direction of EURUSD. The Euro-zone PMIs that were released earlier today had almost insignificant effects on EURUSD price. Coming later today with possibly much bigger impacts are the core retail sales m/m and the ISM manufacturing PMI data from the US. If there are big deviations from the expected market consensus, the Dollar will move across the board and thereby lead to the EURUSD moving in the opposite direction.

Meanwhile, EURUSD has started to the upside on Monday, after rallying from 1.122 in the Asian session to almost hit 1.125 in the early London session. This currency pair is still under bearish pressure after it dropped nearly 200 pips to 1.1215 from prices above 1.13. Price will very much likely dip below 1.1175 support.

From Elliott wave perspective, EURUSD could be close to a trend bottom. The current bearish run started in January/February 2018 and is completing a bearish impulse wave. A 3-wave bullish correction to 1.18-1.21 should follow afterwards. In past updates, our focus has been on the 5th wave of this bearish impulse wave as it emerges into an ending diagonal pattern. However, the diagonal is not yet complete. 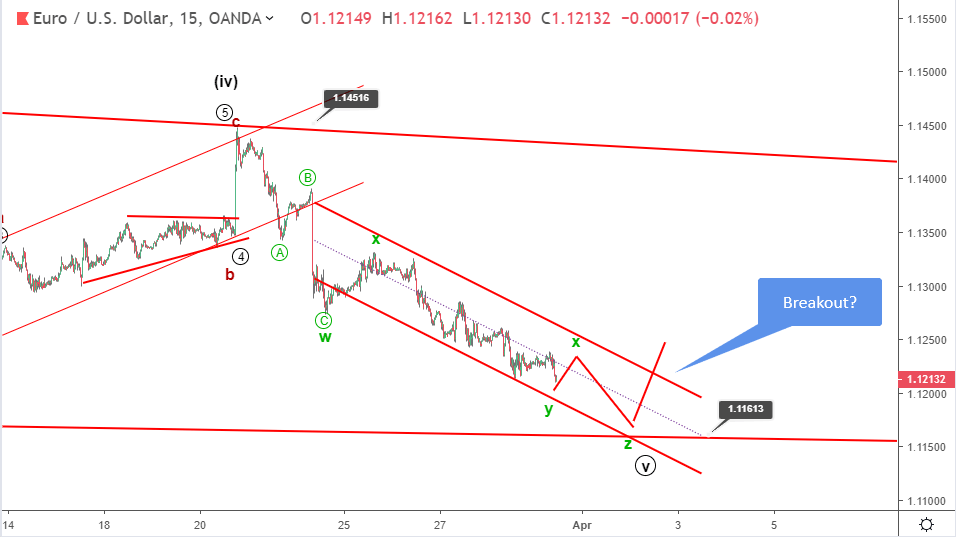 The chart above was used in the last update as the diagonal complete continues its last leg. There is still a big likelihood that price would surge to or above 1.13 before dropping to the bullish reversal zone at 1.1155-1.1165. The 5th leg of the diagonal is looking too fast. Besides, we would like to see a clear 3-swing as was seen in the other waves that make up the diagonal. The chart below explains better. 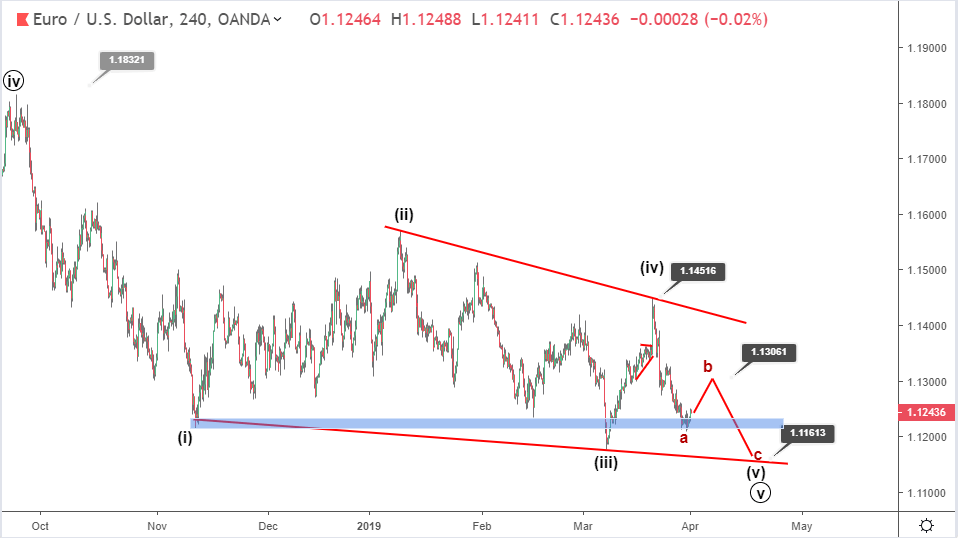 The chart above covers the entire diagonal 5th wave. Wave (v) is expected to have three big swings and might take longer than expected before it completes. Currently, the price is around minor support. A push toward 1.13 or above could happen before the next dip to 1.116 to complete the pattern. If this pattern ends as expected, a big 3-wave correction to 1.18-1.21 will very much likely happen.