March 18, 2019, | AtoZ Markets - The Coinbase team recently announced about upcoming changes to the Coinbase Pro-its advanced trading platform. Changes in the platform that supports functions that are not available for the consumer platform are scheduled for March 22.

Coinbase pro changes in a brief

Coinbase pro exchange made an announcement of upcoming fees changes through its blog on Medium. As the company claims in its blog post, the changes are set to a to “further optimize the market health of the platform, increase liquidity, enable better price discovery for trades, and make price movements smoother”. The Coinbase Pro statement mentions the following changes:

The key changes as the company outlines are that the Coinbase Pro exchange fees have increased.

The most notable of these is the renewal of the commission structure. The platform will now apply relatively high fees: 0.15% for those who trade less than $ 100,000 over a 30-day period. Coinbase fees were 0%. However, the new change reflects a rather sharp growth. However, it still remains cheaper than some other US exchanges, such as Gemini.

Other changes include updating order highs to provide protection against large price movements, increasing the size of new orders and adding market protection points. Moreover, Coinbase Pro and Prime will no longer support stop market orders. According to the company announcement, all stop orders must now be submitted as limit orders and include a limit price.  As for the currently open stop market orders, as the Coinbase Pro reports, they will be canceled on Friday, March 22 @ 6:00 pm PDT. Coinbase Pro will be offline Friday, March 22 @ 6:00 pm PDT to 6:30 pm PDT.

Coinbase Pro fee changed and not everybody is happy about that

Such changes excited the crypto community and raised discussions in the social media and in the Reddit in particular.

Previously, Coinbase Pro attracted users because of lower trade fees. Changing the fee structure means that users have almost no reason to choose between Coinbase and Coinbase Pro. Naturally, Coinbase users questioned whether the change was motivated by greed or any other similar goals.

The Reddit user Voidward  who in his profile entitled as Crypto Expert spoke of the new fees structure and attempt to curb volatility:

Hard not to assume there is not some element of greed involved. Removing stop orders and limiting market orders to not move the price more than 10% seems like it's aimed at limiting volatility, but at the same time, people are probably not going to like going to sleep with open orders and no stop losses.”

Like most exchanges, CGCX operates a taker-maker fee model per. For a single trade, the fee is calculated as a percentage of the trade’s quote currency volume. The fees are different for a ‘taker’ and ‘maker’ trade. ‘Taker’ trades are any orders that remove liquidity from the exchange’s order book, therefore, the fees charged are higher. ‘Taker’ fees stand at a flat rate of 0.25% for all pairs. ‘Maker’ trades, on the other hand, adds liquidity to the exchange’s order book by placing limit orders below the ticker price to buy or above it to sell. CGCX offers a standard 0.15% for all ‘maker’ orders for all pairs.

CGCX accepts deposits in US Dollar, Bitcoin, Ethereum, Ripple, Litecoin, Dash, Bitcoin cash and CGCX (their token). Meanwhile, deposit fees are not charged for all these currencies.

What about Binance trading fees

The screenshot below shows a detailed breakdown of the Binance fees that are based on the maker-taker model.

Deposit fees, as one would have expected, are free. However, it’s normal that the sending wallet pays blockchain fees with cryptocurrencies.

The withdrawal fee is dependent on the blockchain transaction fee. It is often updated based on the current blockchain condition and seems to be fair enough.

What about Coinbase Pro fee changes?

Coinbase Pro uses a maker-taker fee model for determining its trading fees. Orders that provide liquidity ("maker orders") are charged different fees than orders that take liquidity ("taker orders"). There are no fees for signing up or having a Coinbase Pro account. There are also no fees for holding funds in your Coinbase Pro account and you may hold assets as long as desired. Your account will not be closed due to inactivity. After the changes apply the Coinbase pro fees will be the following: 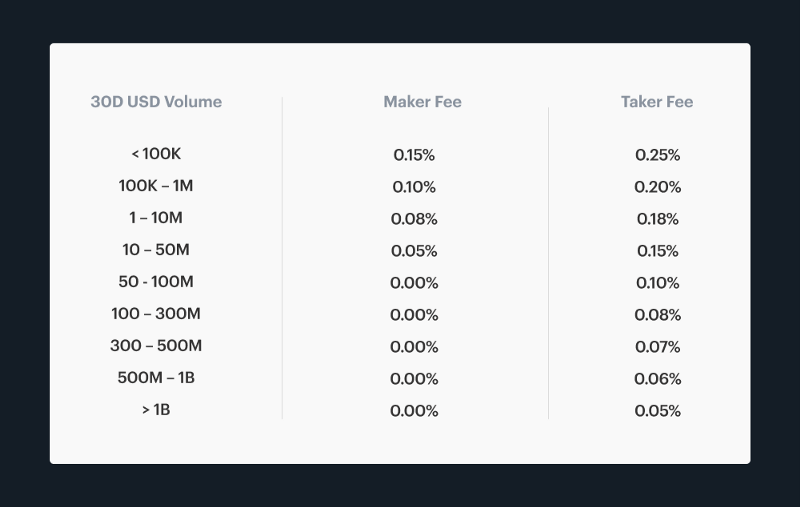 In recent months, Coinbase's reputation has been subjected to various tests. Coinbase’s recent acquisition of Neutrino’s startup blockchain project, known for its controversial history, has provoked anger in social networks and the general closure of its accounts by Coinbase users. As the media reports, Neutrino is known for selling spyware to the governments of Ethiopia, Sudan, Saudi Arabia where human rights are often violated.

In addition, Coinbase’s official statement about covering up the fact of selling user data to third parties added fuel to the fire.

Later, however, Coinbase claimed that it has realized that it has made a big mistake by purchasing  Neutrino. In addition, Coinbase CEO Brian Armstrong made a public statement in which he said that the company is firing key members of the newly acquired security company Neutrino.

It is unclear whether Coinbase activity and the latest Coinbase Pro fees changes announcements will lead to a mass exodus of users from this crypto exchange or will leave many inactive accounts. The XRP token listing also attracted some negative attention to Coinbase, since Ripple broke one of its listing rules. If Coinbase is about to raise its prices for investors with relatively low capital, this will only lead to further investigation.

What do you think? Do you think that Coinbase still has a future?

Best Australian Based Forex Broker in 2021
Broker of the month!