How did the Coinbase client database scandal start?

On February 19, 2019, Coinbase made an announcement through Medium, saying that it acquired the blockchain startup Neutrino, which is developed, as the company’s website information states, “for the law enforcement agencies”. Coinbase statement reads :

“Today we’re announcing that Coinbase has acquired Neutrino, a blockchain intelligence platform. Neutrino’s technology will play an important role in legitimizing crypto, making it safer and more accessible for people all over the world.”

The announcement about the Coinbase latest purchase was also made on the Neutrino webpage as well.

As the media reported, the main startup purpose will be to analyze the flow of coins and their interaction with exchanges and help prevent theft of funds on Coinbase, investigate ransomware attacks and spot entities buying and selling goods on darknet markets. Despite all the positivity about the upcoming partnership, the aforementioned Coinbase blog post caused the opposite reactions from the ones they expected. It happened due to the controversial history of their new acquisition product.

Neutrino is an Italian blockchain that was founded in 2016. According to the information on the company’s website, its project entitled as XFLOW provides a solution for monitoring analyzing and tracking cryptocurrency flows across multiple blockchains. It specifically developed for companies operating in the cryptocurrency ecosystem and has special features to support the compliance procedures by assessing the KYC/AML risk of the crypto-financial assets. The Neutrino team consists of three cybersecurity specialists: CEO Giancarlo Russo, CRO Marco Valleri and CTO Alberto Ornaghi.

The local resources claim that Neutrino team members are no strangers to building complex computer monitoring software for law agencies. Previously known as Hacking Team, Neutrino company got its start when Valleri and Ornaghi (under the aliases NaGa and ALoR) sold man-in-the-middle attack software to the police force of Milan, Italy, in 2003.  Russo who acted as COO of the company joined the team later. As the media reports, through its existence, the company sold its services to Saudi Arabia, Morocco, Sudan, Kazakhstan, Bahrain, and Turkey, among others. 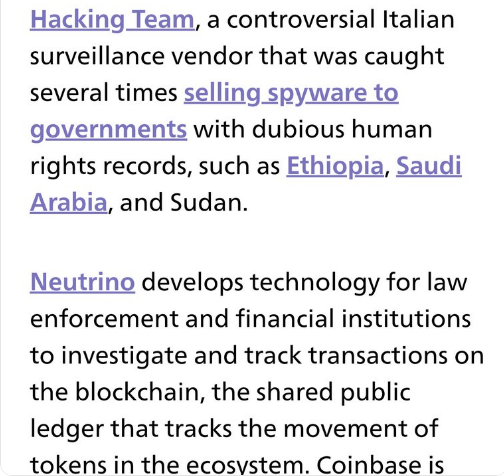 These services centered around Hacking Team’s proprietary Remote Control System (RCS) software, a Trojan horse malware that gives users the ability to remotely access files, record keystrokes, take photos and read emails from an infected device. Reporters Without Borders labeled Hacking Team as one of five “Enemies of the Internet” in 2013 for its role in humanitarian abuses against journalists.

The controversy around Neutrino causing a speedy response in media

After the Coinbase announcement, anger rose across social media and on Twitter in particular. People were sharing their opinions on the issue and trying to predict what will happen next. From the behavior of the Coinbase team, it seemed that the company decided to focus mostly on technology and their closed their eyes to the actions of the company they hired, because, as they said, they were the best. But the Coinbase community could not agree with this decision.

Stephan Livera‏ Manager at Macquarie Group wrote in his twitter, that Coinbase is a bright, shining example of how to:

Kraken CEO Jesse Powell in his turn disagreed with the Coinbase statement that “Neutrino’s technology is the best“ Coinbase “encountered in their space.” The Kraken team found them to be decidedly subpar on product and highly risky as regards to an M&A: 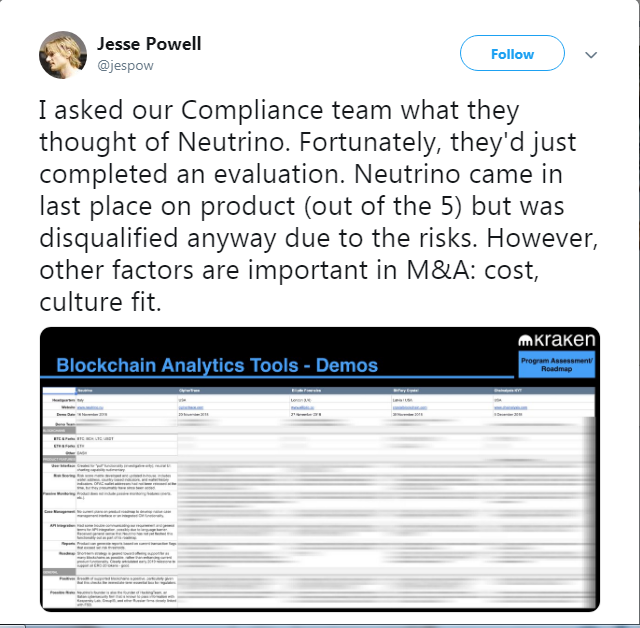 A hashtag #DeleteCoinbase has been launched on Twitter as a result. The message was prompting users to cut ties with the platform. Some Coinbase clients, however, have since reported that they are struggling to delete their accounts. Those users who successfully managed to deactivate their Coinbase accounts shared it on Twitter : 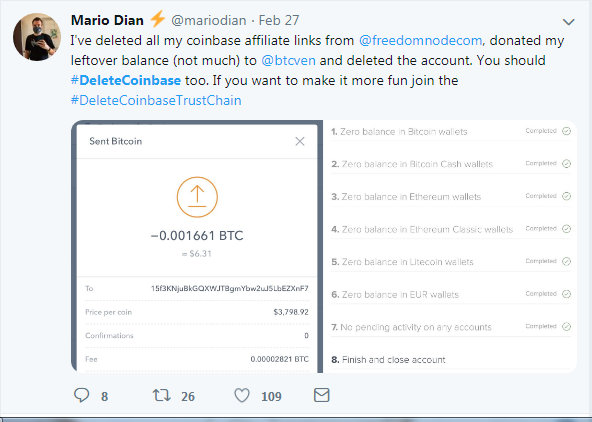 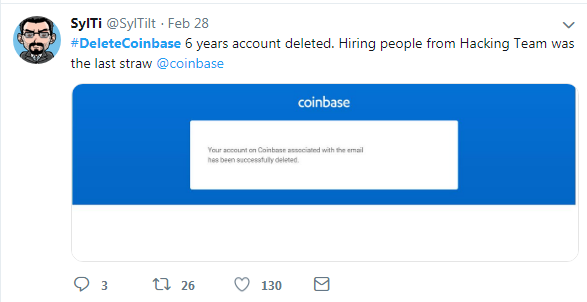 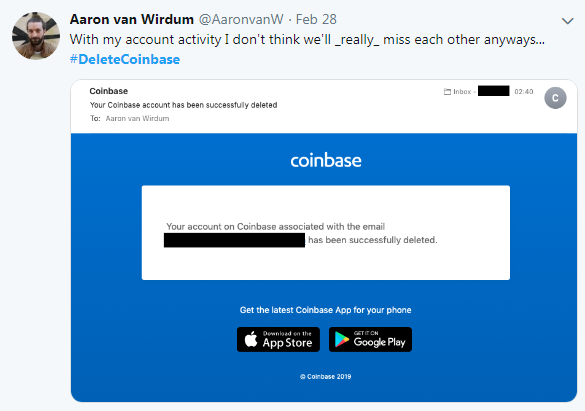 Certain media went further and decided to make research among Coinbase users to find out how many of them have stopped using the crypto exchange permanently.

In one of her latest interviews Christine Sanders, Coinbase’s Director of Institutional Sales while reasoning the controversial software firm's Neutrino acquisition said that Coinbase prior blockchain analysis providers were selling customer data. She said:

“It was important for us to migrate away from our current providers… They were selling client data to outside sources and it was compelling for us to get control over that and have proprietary technology that we could leverage to keep the data safe and protect our clients.” 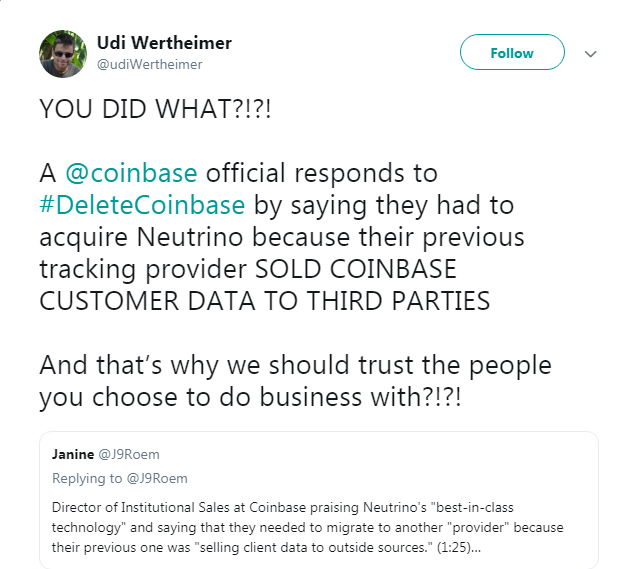 The blockchain experts assume, that in spite of no need of the third party for transactions the current blockchain infrastructure still, demands solutions like Coinbase to act as a trusted third party for fiat. Until now Coinbase showed being worth their users' trust by managing the clients’ funds and acting responsibly, and compliantly. However, the current situation might negatively affect this crypto exchange position in the market. The latest Coinbase official’s statement of covering up the fact that user data had been sold made things even worse. It is unclear whether Coinbase activity will cause a massive exodus of users from this crypto exchange or leave loads of inactive accounts. It is obvious, however, that the company’s reputation recovery period will take some time.

Atoz Markets team tried to reach out to Coinbase's administration for comments on the topic, however, our calls were not aswered.