Get VIP Trading Signals Market Watch
Trade Now Your capital is at risk.
The Cable recovers from the early London loss ahead of the Friday non-farm payroll data. The following 8 January GBPUSD Elliott wave analysis shares some insights.

January 08, 2020 / AtoZ Markets - It's been a mixed week for the Forex market although general sentiments have geared more toward risk appetite. So far, the dollar has seen a net bull week. GBPUSD has been less volatile this week than the last two months. While sentiments around the Sterling look quite bearish due to the January 5 lockdown, the downside run has been limited despite the dollar gains.

The currency pair is currently supported at 1.33. Ahead of the US non-farm payroll date coming later on Friday (in 2 hour time), GBPUSD gyrates between 1.3585 and 1.3605. Intra-day resistance levels exist at 1.363, 1.367 and 1.37. A breach above 1.37 might open the door to 1.4. A worse than expected NFP with big deviation and significantly higher unemployment rate would kick-start this journey. On the other hand, if the NFP is far better with 50K or more deviation and the unemployment rate is not higher, the dollar would jump and thus drag GBPUSD to retest or even break below the 1.353 support. Traders should however watch for reaction at 1.35 if this scenario plays out. Other levels for bearish target are the 1.343 and 1.33 support levels.

In the last update, we looked at the wave development of the current rally. The long-term bullish run is corrective and evolving into a complex and extended double zigzag pattern. Meanwhile, in the medium-term, this currency pair completed an ending diagonal pattern to signal the start of another sub-degree corrective dip. As the chart below shows, a top has been confirmed at 1.37. How long it will hold remains to be seen. 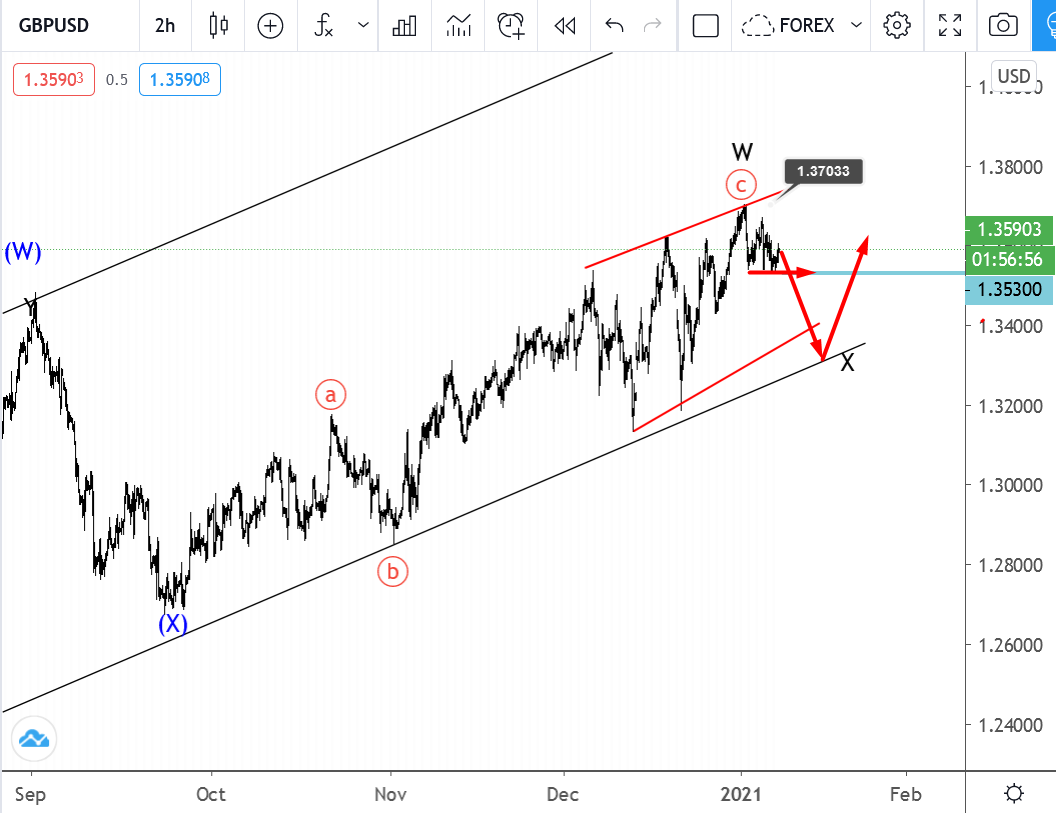 The prevailing outlook supports further dip for corrective wave X leg to 1.33 at least, unless a quick top above 1.3705 will happen. As mentioned earlier, the NFP could give us a quick answer. Personally, I will expect a break below 1.353 support to trigger further falls toward 1.33 in the short-term. If the NFP is very good for the dollar, the move will be quickened. GBP maintains a bearish outlook or should I say neutral to be more realistic? However, despite the dip expectation to 1.33 and even 1.313 (ideal correction target for diagonals), the bullish long-term outlook still stands as we look for wave Y of (Y) above 1.4.