30 March, AtoZForex, Johannesburg – Risk/Reward is a topic often discussed, but never put into the correct context. It is also one of the very first things they teach you about when you undertake a course in Trading. I want to take this opportunity to provide the correct perspective on one of the most frequently asked trading questions - What is the right Risk Reward in Forex?

Courses I have been on and have seen advertised make it a cardinal rule that in order to take a trade the Risk/Reward should always be at least 1:1. In fact, going through my old course notes I found the words written in BOLD letters: “ONLY TAKE A TRADE WITH AT LEAST 1:1 RISK/REWARD”

As my knowledge and experience of trading grew, I have come to realize the over-simplicity in the above statement. As a newbie, I was dogged in practicing the 1:1 rule. For some of my trades I would do something as illogical as forcing the Reward to be at least as great as the Risk without considering major Support and Resistance levels. To have believed at the time, that, it was the correct way to enter the trade seems a bit ridiculous now. Most of those trades ended in losses and I learnt my lesson at least a few times over and that is to not force a trade. As a new ‘reformed’ Trader I would miss out on some great trading opportunities when the 1:1 Rule was not met. So is the answer to pass up a good trade opportunity? Or is there more to it?

To be able to answer the "What is the right Risk Reward in Forex?" question, traders must understand RRR and Win-Rate correlation.

As every strategy is different there are multiple elements of Risk Management for each strategy, which in this post we will go through two of them:

Although Risk Reward Ratio (RRR) is certainly important, Risk Reward is not everything, definitely not the only factor to consider when taking a trade. A simple argument based on the numbers can prove why this is not the only important factor when deciding on whether or not to take a trade.

Equally and even perhaps of more significance is the Win-Rate metric of your strategy. If you utilize a strategy with a high Win-Rate then it possible to take trades with an inverse RRR, meaning that you are risking more than you stand to gain, and still make a profit. For instance, if you have a strategy that has an average Win-Rate of 70% you can afford to have a Risk Reward Ratio of less than 1:1 and still be profitable.

The Risk Reward Ratio vs. Win-Rate chart below illustrates a break-even outcome for 100 trades comparing the Win-Rate and Risk Reward Ratio. As can be observed, there exists an inverse relationship between RRR and Win-Rate. As the Win-Rate of a strategy increases the Reward can go down relative to the amount at Risk and the trade could still be no worst than break-even.

An exceptional strategy with a 90% Win-Rate will only need a minimum return of 35 cents for every 1 dollar at risk to turn a profit. At the other extreme of the spectrum, a very poor performing strategy of only a 30% Win-Rate will require one to make almost 3 dollars for every 1 dollar at risk. As a Trader we always need to first consider the Risk before the amount of potential reward. Using a 30% strategy and a 1:1 Risk Reward Ratio we would be risking 1 dollar to make 1 dollar, but in actual fact we would be risking 1 dollar for every 43 cents potential gain. Even if you were to increase the Reward threefold, this would still be a loosing strategy as the Win-Rate would now drop below 30% due to the laws of probability. So whichever way you look at it, this does not make sense in any business context. 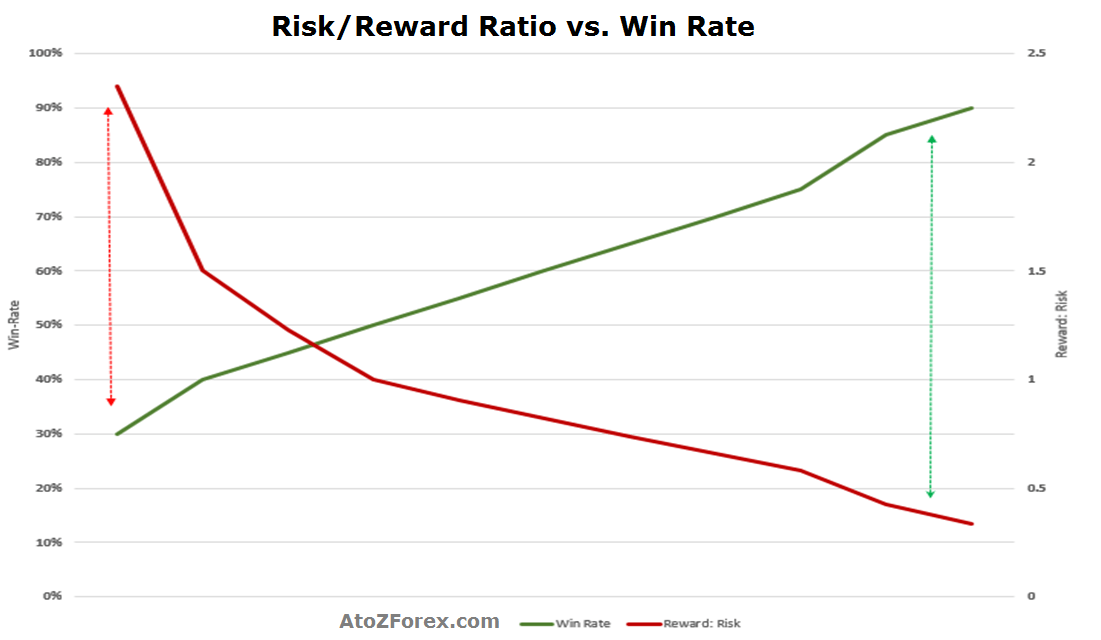 Now, if you are trading a Strategy with a Win-Rate of less than 50% then your Risk Reward Ratio  always need to be above a 1:1 in order to at least break-even. On the other hand as the Win-Rate improves going to the right of the chart your Risk Reward(red line) can be below 1:1 and still put you in a position to be profitable.

As the above chart illustrates that if you have a strategy with a very low Win-rate (below 50%) then it is crucial to have an RRR of greater than 1:1. The question is why would you trade a strategy with just about or less than a 50% win-rate? Why not just flip a coin to give you a 50% probability of being correct? Why even go through the trouble of following the rules of that strategy?  It seems a complete waste of time and money. To reinforce this message; I was once sold a break-out strategy which traded the S&P 500 and other indices. (Looking for a strategy? Download a Free Winning Forex Strategy) The RRR for that strategy was strictly set at 1:1. At the time I was mislead to believe that this strategy wins 80% of the time. After trading it for a few months I realised that the Win-Rate was in fact around 50% and this was great for conserving capital, but that isn’t the point of trading! The point is of course to make money. Needless to say, I stopped trading that particular strategy.

In conclusion, my recommendation is to understand the Win-Rate of your strategy through proper analysis. This will prevent you from turning away good trade opportunities solely because it doesn’t meet the 1:1 Risk/Reward rule and also ensure that you do not risk too much for a particular strategy. Trading is a game of probabilities and knowing what the average Win-Rate is of the strategy you are trading is critical to success. To be able to put you on the right path about the preliminary question of "What is the right Risk Reward in Forex?" you need to be aware of other trading metrics as well such as ‘Average Win versus Average Loss’ which I endeavor to share with you in a future article.