The escalation of the political conflict between Russia and Ukraine provoked another wave of falling cryptocurrencies. We tell what happened and how the market reacted.

The morning of February 24, 2022, began with the news that Russian President Vladimir Putin announced the start of a special operation in the Donbas.

According to Putin, the purpose of the action is “to protect people who have been subjected to bullying and genocide by the Kyiv regime for eight years.” As a result, the Russian authorities decided to "strive for the demilitarization and denazification of Ukraine."

Against the background of the publication of the news, videos began to appear on the network showing explosions in various cities of Ukraine, including Kharkiv.

According to media reports, Russian troops crossed the border of Kharkiv, and a landing of troops and helicopter aircraft took place in the Odesa area.

As previously reported, the crypto market is sensitive to the growing tension between Russia and Ukraine. Against the background of the escalation of the conflict, bitcoin has repeatedly gone into decline. The market also immediately reacted to Vladimir Putin's decision to launch a special operation in Donbas.

The digital asset market reacted to the escalation of the conflict between Russia and Ukraine with a fall. As of 07:29 (UTC), bitcoin is trading at $34,758. In 24 hours, according to the CoinMarketCap resource, the cryptocurrency has fallen in price by 8.02%. 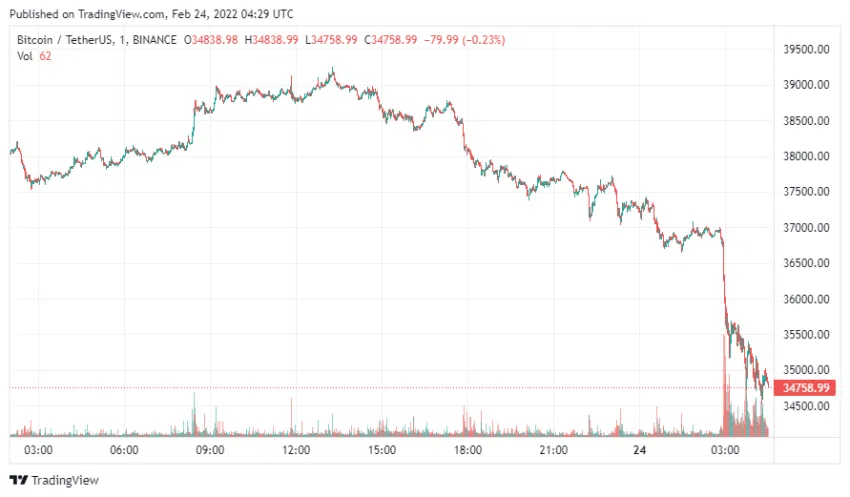 Many members of the crypto community were quick to comment on the actions of the Russian government. Russian-born Ethereum creator,  Vitalik Buterin, criticized Russian President Vladimir Putin’s decision to attack Ukraine, calling it a “crime against the Ukrainian and Russian people.”

"Very upset by Putin's decision to abandon the possibility of a peaceful solution to the dispute with Ukraine and go to war instead. This is a crime against the Ukrainian and Russian people. I want to wish everyone security, although I know that there will be no security. Glory to Ukraine."

At the same time, the developer hastened to clarify that Ethereum is out of politics.

Reminder: Ethereum is neutral, but I am not.

Many other popular members of the crypto community joined the opinion of Vitalik Buterin.

“Praying for everyone in Ukraine, stay safe,” Lark Davis, a popular analyst in the crypto community, wrote in his microblog.

Praying for everyone in Ukraine, stay safe!

Many representatives of the crypto community, including Anthony Pompliano, co-founder of Morgan Creek Digital, see economic benefits for local authorities in the actions of the Russian Federation.

“Russia is the third largest oil producer in the world. Oil just hit $100 a barrel. The impact of this situation will be felt all over the world,” he wrote on Twitter.

Russia is the third largest oil producer in the world.

The impact of this situation is going to be felt globally.

Among the participants of the crypto community there were also those who preferred to pay attention to the possibility of benefiting from the political conflict. For example, popular analyst Peter Brandt, who was able to correctly predict the correction of Bitcoin in 2018, suggested that the situation could be used to make money on the news.

WAR!!
Will this become a classic "buy the rumor, sell the news" event for precious metals, grains, stocks, et al?

What should investors prepare for?

Probably, against the background of the escalation of the conflict between Russia and Ukraine, the digital asset market will continue to fall.

Chinese journalist Colin Wu drew attention to the fact that many crypto investors rushed to get rid of Ethereum amid the escalation of the conflict between Russia and Ukraine. This is indicated by the increased commission, against the background of an increase in the transaction load on the cryptocurrency network, as well as the appearance of a large number of applications for the liquidation of positions in ETH.

According to Nansen, the median gas of Ethereum rose to 250gwei, investors are preparing for risks. Block Analitica data shows that $510 million in collateral will be liquidated around $2082 on Ethereum. pic.twitter.com/5UmO3eKA6w

The negative dynamics of bitcoin and other cryptocurrencies also indicate the desire of investors to withdraw assets from the market.