July 26, 2021, | AtoZ Markets – Today, the crypto market has decided to pick up the baton at a productive weekend and continues to show bullish momentum. As a result, its total capitalization increased by 11 +%, reaching, according to CoinMarketCap, $1.6 trillion. This is a nearly 3-week high.

The main driver of such market dynamics was Bitcoin (BTC), which made a leap to the local maximum of $39,500, having risen in price by 13% intraday. Subsequently, the price has retraced slightly towards $37,900 at the time of writing.

Such growth helped the premier cryptocurrency to recover the losses of a whole month in just a few hours.

“Bitcoin rose 12% in an hour, being at the forefront of growth because the Chinese were just awake. In general, it is clear that Bitcoin began to grow after rumors about Amazon spread in the Chinese community. "

According to a Bloomberg analyst, Akshay Chinchalkar, the current upward movement of Bitcoin may continue.

"The rapid recovery of Bitcoin above the psychologically significant $30,000 mark gave courage to the bulls, which pushed the price through the key resistance of $36,500 on Monday," he notes.

Chinchalkar believes that this movement confirms the formation of the classic “double bottom” pattern. The double bottom is considered one of the major reversal patterns after a downtrend. It consists of two approximately equal lows, which the analyst indicates on the chart below: 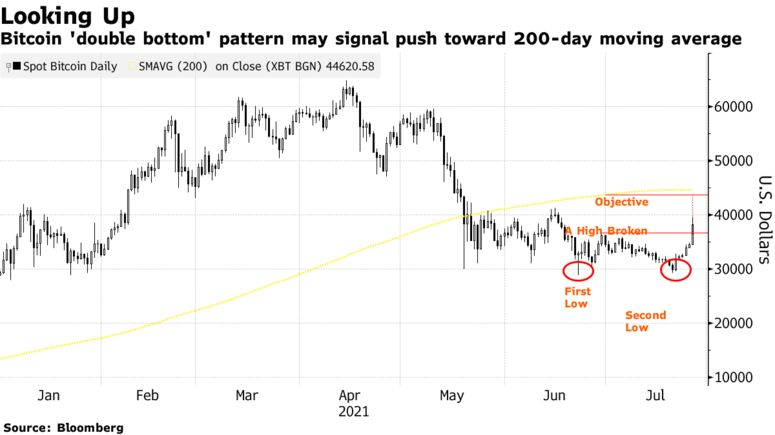 Although many similar patterns can occur during a downtrend, a reversal requires confirmation, namely a breakout of the nearest resistance. Another important factor for confirming the pattern is the time interval between the lows - it must be at least a month, which is observed in this case. They also pay attention to the ascent between the lows, which should be at least 10% and is also present on the chart.

“This move confirmed the classic double bottom pattern, potentially indicating a rise to $44,000, where the pattern's target and the 200-day moving average intersect. The recent course behavior indicates that short-term resistance may lie in the $41,000 - $42,000 zone,” Chinchalkar concludes.