Bitcoin, the world's largest cryptocurrency, fell below $43,000 on Thursday, testing multi-month lows after the release of the minutes of the December meeting of the US Fed.

On January 6, the price of Bitcoin nosedived from $46,732 to multi-month lows at around $42,500 (on the Binance exchange). Over the past 24 hours, the price of the premier cryptocurrency has decreased by 8.30%, according to CoinMarketCap.

Bitcoin pulled the rest of the market with it. According to CoinMarketCap, all digital assets from the top 10 by market capitalization were in the red zone. During the day, the price of Ethereum fell by 9.9%, Solana fell by 12.2%, Polkadot - by 12.5%. 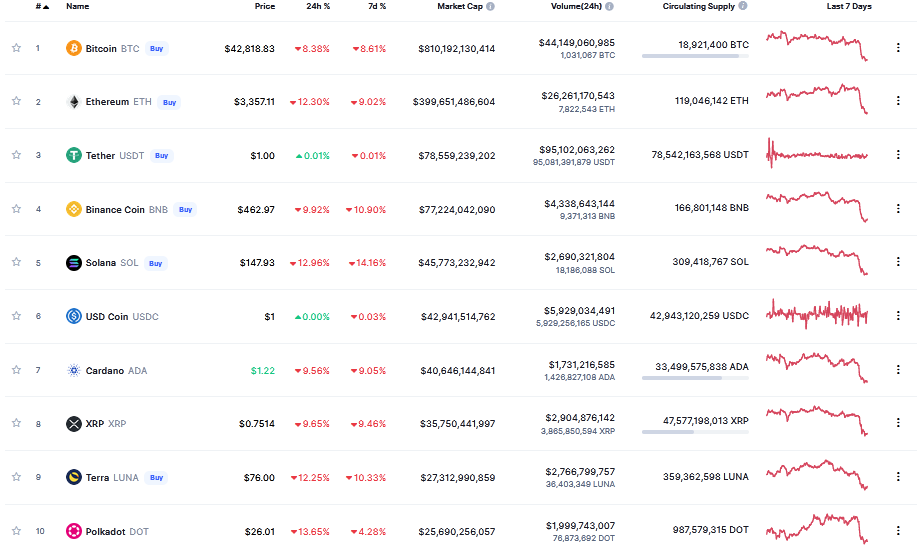 The crash came on the back of news about the Fed's readiness to raise the base interest rate earlier and faster than expected. In the previously published minutes of the December meeting of the Federal Open Market Committee (FOMC), the regulator associates the decision with the strengthening of the economy and high inflation.

According to the report, some Fed officials noted that soon after the increase in the key rate, the Fed may have to begin to reduce the volume of assets on the balance sheet.

The minutes indicate that the rate of outflow of the balance sheet will be faster than in October 2017, when the regulator also rolled back the quantitative easing program.

In parallel with this, against the background of the disconnection of the Internet in Kazakhstan, there was a significant decrease in the hash rate of the bitcoin network. After the ban on mining in China, many players in the sector moved their computing power to the country.

Internet has been down in Kazahstan for a few hours where roughly 18% if Bitcoin's hashrate is.

Looks like the impact on the hashrate is so far 12% drop just in the last few hours since internet went down. pic.twitter.com/FcTDsJ6R77

According to Larry Chermak, vice president of research at The Block, about 18% of the hash rate of the first cryptocurrency network is concentrated in Kazakhstan. According to BTC.com, on January 5, the performance of some mining pools did actually decline.

Recall that in December, Bloomberg Intelligence analyst Mike McGlone predicted that an inflationary environment will prevail in global markets in 2022 and deflationary assets will rise in this environment. The senior Bloomberg analyst believes that when markets face high inflation, investors will turn to Bitcoin as a safe haven with the price hitting $100,000.