Get VIP Trading Signals Market Watch
Trade Now Your capital is at risk.
Hackers have obtained unauthorized access to the oldest information resource about bitcoin, Bitcoin.org.

One of the first websites about Bitcoin, Bitcoin.org, has been hacked to display a fraudulent cryptocurrency giveaway ad.

Upon visiting the website, users were greeted with a pop-up message with all the signs of one of the most common schemes for stealing cryptocurrency. It claims that the Bitcoin Foundation organization wants to support those who have helped it over all previous years, and therefore doubles the assets if sent to the specified address. The scammers try to create a sense of urgency by claiming that only 10,000 users will be able to participate in the distribution. 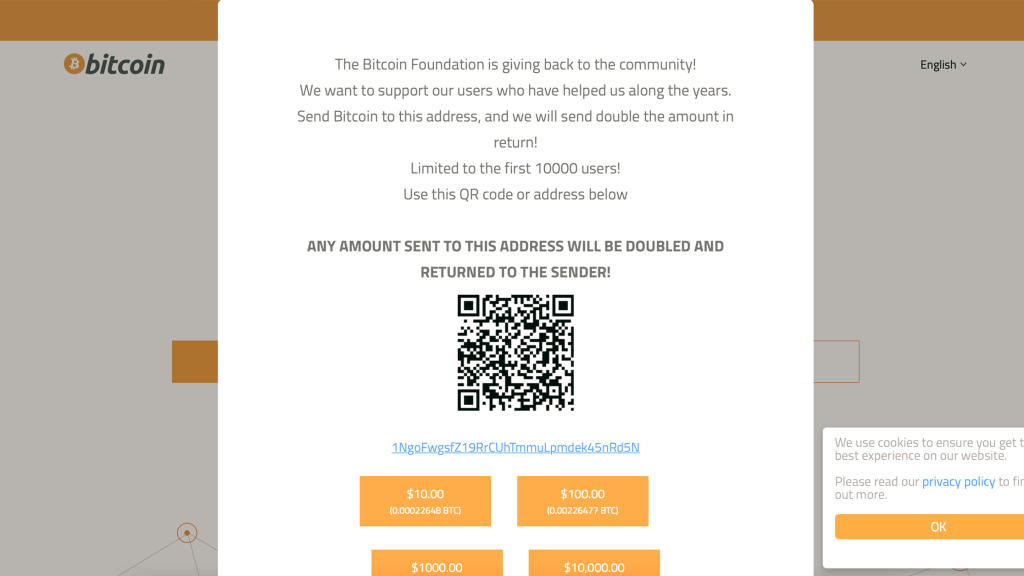 After the changes appeared on the site, other pages also stopped opening. At the time of publication, it is completely unavailable. The Namecheap registrar, in response to an appeal from Bitcoin developer Matt Corallo on Twitter, confirmed the shutdown of the domain.

According to data from the blockchain, 0.4 BTC or about $17,700 was received to the specified address, and almost the entire amount came with the first transaction. Sometimes this is done by the scammers themselves to create the appearance of other users' trust in the offer.

The bitcoin.org domain was registered on August 18, 2008, presumably by the creator of Bitcoin, Satoshi Nakamoto. The administrator of the Cobra resource commented on the situation as follows:

“Bitcoin.org has never been hacked, never. We switch to Cloudflare, and after two months we are hacked. Can you explain where you were sending my traffic? Because there was no traffic directly on my server during the hacking."

“As the old adage says,“ Why do criminals rob banks? Because there is money. ” Now one of the main directions for cyberattacks is various cryptocurrency exchanges and other parts of the universe related to cryptocurrencies. Hackers in this space are getting more inventive, but we stay ahead."

Bitcoin.org was hacked in early July

In July, bitcoin.org was hit by a major DDoS attack, prompting Cobra to switch to Cloudflare.

“I don’t think I was insulted like that for some time. Ungrateful bastard, - he wrote then. - In the past, it was possible to wage a sane fight against DDoS attacks. Now they can just crash the site at will. There is no more “fight”. They can crash the site and keep it that way until they leave you alone."

In June, Australian entrepreneur Craig Wright, who claims to have created Bitcoin, won a cryptocurrency white paper copyright lawsuit against Cobra. Because of this, the site administrator was forced to restrict access to documentation from the UK.