Get VIP Trading Signals Market Watch
Trade Now Your capital is at risk.
Bitcoin is celebrating its 13th birthday today as the network underwent a six-month-long rally to attain a new all-time high hash rate.

The launch of the network was preceded by the publication of the Bitcoin whitepaper (October 31, 2008). The first transaction took place on January 12, 2009: Satoshi Nakamoto sent 10 BTC to Hal Finney. Three days before that, version 0.1 of the Bitcoin software was released. Nakamoto's identity and the motives behind the creation of bitcoin remain a mystery that they are trying to unravel in the cryptocurrency community.

Fast-forward to 2022, the Bitcoin network shows no signs of slowing down by reaching a new all-time high hash rate.

The computing power in the Bitcoin network has increased by a staggering amount due to the geographic relocation of miners and new mining equipment. 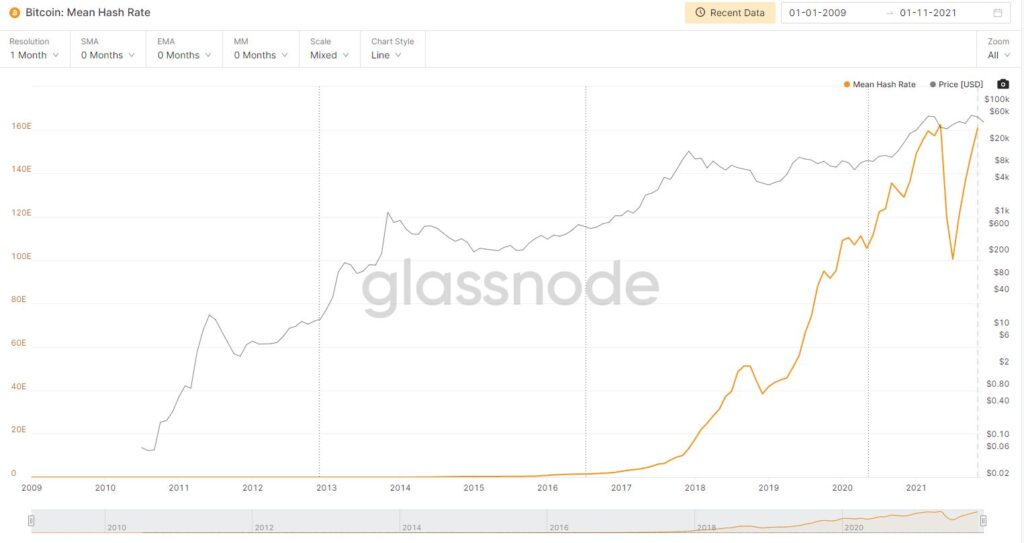 This shows that Bitcoin has escaped the fall in hash rate corresponding to the multi-stage Chinese repression against cryptocurrency in 2021. According to Bitfury, most of the recovery is because "new generation equipment are online" no to the relocation of equipment from China, which would have been too inefficient to operate in other countries.

In April 2021, Beijing officials began analyzing the energy use of local miners, sending notices to data centers to gather more information on cryptocurrency mining. In May 2021, China banned banks from offering Bitcoin services and began a systematic crackdown on mining activities.

However, Jason Zaluski of Toronto-based Hut 8 Mining Corp said: "China banned mining simply caused a geographic shift ... we see this [move] to other countries, including Canada and the United States, as a net positive result." .

He was correct, as American companies became beneficiaries of displaced Chinese miners seeking a haven for mining. Other countries have also seen new miners due to their low electricity costs.

Why is the importance of hash rate?

The hash rate refers to the amount of computing power that is supplied to the Bitcoin network. Whenever a transaction is verified, it is recorded on the blockchain as part of a block. Applying a hashing ensures that transactions are valid.

To receive BTC, a miner must successfully " hash " the header of a block, which contains a redacted version of the contained transaction data. The possibilities of finding the hash become more complex as more coins are mined; therefore, a higher hash rate (more computing power) improves the probability that a miner will receive a Bitcoin reward.

Hashrate calculations are not accurate, and as a result, it is better to focus on longer periods of time, such as weeks or months, when evaluating hash rates. The indicator plays an important role in determining the security of the network. The more miners on the network intend to mine BTC, the more secure the network becomes.