Get VIP Trading Signals Market Watch
Trade Now Your capital is at risk.
The Bitcoin dominance index is falling rapidly. According to the resource CoinMarketCap, the indicator fell to a two-year low.

April 12, 2021 | AtoZ Markets – According to the latest data published by CoinMarketCap, the market dominance of Bitcoin has plunged since the start of this year. 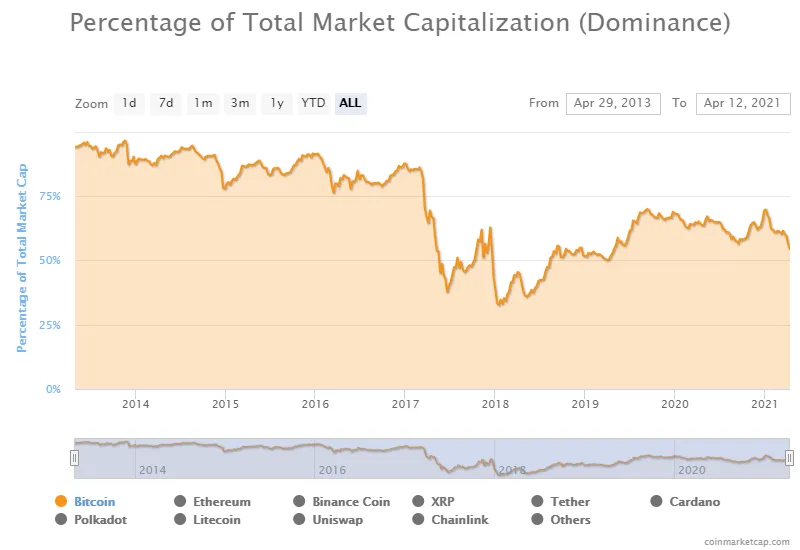 At the time of this writing, the dominance of Bitcoin is 54.44%. The last time Bitcoin was in this state was at the end of April 2019.

It is noteworthy that according to the Real Bitcoin Dominance Index (TRBDI), the indicator is still holding at 78.8%.

The different values ​​are explained by the fact that the TRBDI index does not take into account the capitalization of ICOs, stablecoins and other centralized projects when calculating. The following projects are taken into account: Litecoin (LTC), Ethereum (ETH), Monero (XMR), DASH (DASH), Zcash (ZEC), Ethereum Classic (ETC), Dogecoin (DOGE) and Decred (DCR).

The fall in bitcoin dominance coincided with the so-called altcoin season. For example, Ether (ETH) and Binance coin (BNB) have already renewed their all-time highs at $2197 and $635, respectively.

Meanwhile, altcoins turned out to be the leaders in terms of growth. Dogecoin (DOGE) is in first place. Its growth in the first quarter was 863%. The second place was taken by the BNB token , soaring in price by 610%. The top three best-paying altcoins for the first quarter of 2021 were closed by cardano (ADA), which grew by 577%.