Get VIP Trading Signals Market Watch
Trade Now Your capital is at risk.
MACD is one of the best trading indicator which is most popular in Forex industry and widely used by the professional trader. Below we're going to provide you with the best MACD trading strategies that you can follow.

05 Jun 2020 | AtoZ Markets - MACD indicator mostly use to identify the new trend and also help to identify the end of the current trend. There are many ways to measure the signals produced by MACD. Many traders use their own settings and methods, which suits their trading psychology and trading style.

What Is the MACD?

A trend-following momentum indicator that reflects the connection between two moving averages of a security's price is known as MACD (Moving Average Convergence Divergence). It is calculated by deducting the 26-period EMA (Exponential Moving Average) from 12-period EMA, and the outcome of this calculation is the MACD line.

Various methods out there to interpret Moving Average Convergence Divergence (MACD), among them the most conventional tactics are Crossovers, Divergence, and impulsive ups and downs.

Try the MACD indicator with a reputable broker on a free account:

MACD calculates by deducting the long-term EMA (26-days) from the short-term EMA (12-days). EMA is a kind of moving average (MA) that holds a wide and loud meaning over the maximum number of current data points. A simple moving average (SMA) also refers to a massive impact on current price shifts as same as EMA.

MACD crossover strategy concept is as same as the Stochastic Oscillator trading method. Both provide buy and sell signals with the crossover between the two lines. Like many other crossover strategies, a buy signal comes when the MACD line crosses above the lower line.

In contrast, sell signals come when the MACD line crosses below the signal line. Before opening a position, a crossover strategy waits for a movement to happen because of its retreating nature.

That means crossover strategy works a little slower.  In a volatile market trend when MACD provides a signal, the price may reach the reversal point. It can be considered as a false signal. 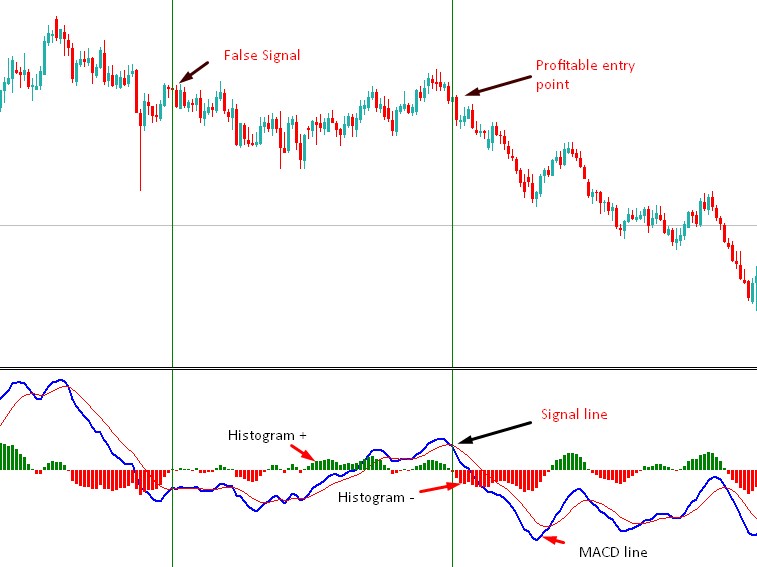 The image above highlights the standard crossover strategy. It showing the false buy signal as well as the profitable sell signal.

The most useful part of the MACD is the histogram.  The histogram bars illustrate the imparity between the MACD line and the Signal line. When the histogram increases in height that means the market price is moving impulsively in a direction.

Like the MACD indicator and want to it them out? Do it with an AtoZ Approved broker for free:

In contrast, when the histogram compresses, that means the market is moving slowly. Therefore, when the histogram moves further away from zero, the moving average lines are moving further separately. When this process is over, the hunched shape will possibly arise. This is the earlier sign of moving averages is tightening again. This is also an oncoming sign of crossover. 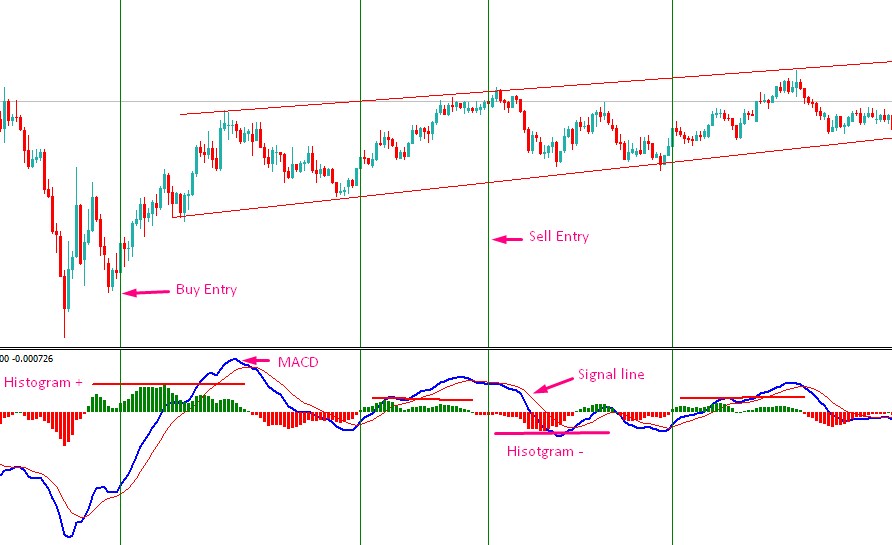 This type of market signals happens very often, so you will typically find fewer of them. Most of the time it's gives a false signal also.

The chart above showing the two buy signal, which had become profitable when the trader can maintain a well-planned entry and exit point. This was the recent market scenario of NZUUSD. When you use the zero-cross strategy you have to understand first, where to exit the market, or place a Stop loss.

Like the MACD indicator and want to it them out? Do it with an AtoZ Approved broker for free:

If we summary the total process it would be like this-

It's good to maintain the money management system that suits your trading psychology. Moreover, always maintain the 1:2 risk-reward ratio.