Shares rose on Tuesday, despite data showing another jump in US inflation in March, higher than analysts' forecasts. Market experts advise investors to pay attention to another government report this week.

The stock market has so far reacted positively to the release of US CPI data for March 2022.

Although the prices consumers pay for everyday goods rose to their highest level since the early days of the Reagan administration in March, investors are expecting this to be a peak and a decline to follow.

The US annual inflation rate accelerated to 8.5% in March 2022, the highest level since December 1981 from 7.9% in February. The numbers beat market forecasts by 8.4%. 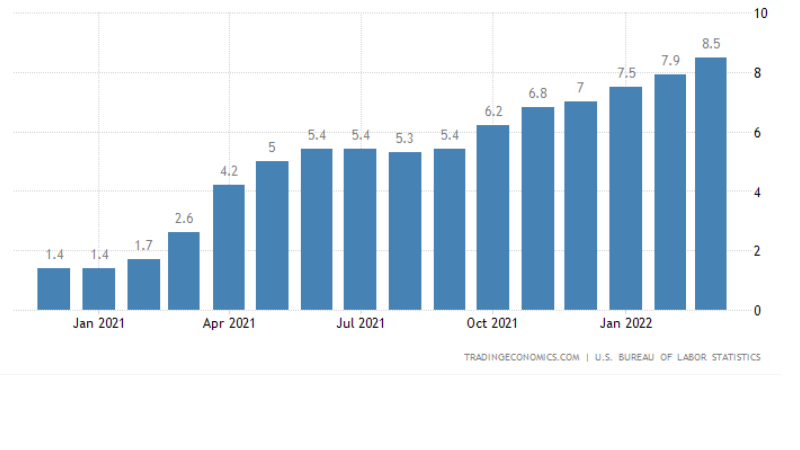 This pace of consumer price growth was driven by the impact of the Russian-Ukrainian war, which pushed up oil and commodity prices, supply chain slowdowns continued, and demand remained elevated.

The jump in prices marks the seventh consecutive monthly increase in the annual rate and the fastest inflation in the US in more than 40 years. This pace will increase pressure on the Federal Reserve to act faster to curb rising inflation, perhaps by raising interest rates by half a point when central bank officials meet early next month.

Gasoline, housing and food costs contributed the most to headline inflation in March, with gasoline prices up 18.3% MoM, groceries up 1.5% and rents up 0.4%.

Prices for used cars and trucks were down 3.8% on the month but still up 35.3% year-over-year.

The increase in prices for medical care amounted to 0.6% per month. Transportation services also rose 2%, resulting in a 12-month growth of 7.7%. Airlines hard hit during the Covid pandemic increased fares by 10.7% on the month, up 23.6% from last year.

What do Wall Street experts say?

According to Nick Maggiulli, chief operating officer of Ritholtz Wealth Management, stock investors contemplating how to survive the worst bout of inflation in four decades need not worry and stay the course.

Maggiulli believes that investing is an effective way to fight inflation. He gives examples of how investments can help offset inflation in order to preserve and increase wealth.

Analysts note that the stock market is feeling good, but this may be temporary and investors should be careful about US consumer spending data.

The latest monthly reports show the fact that consumers are still spending. This is critical for the economy as a whole, given that consumer spending makes up approximately 70% of the US gross domestic product. Or, in other words, this is another reason that a recession may not be as inevitable as the fears of the bears.

Looking ahead, however, “persistent inflationary pressures could continue to weigh on both consumer and investor sentiment,” writes John Lynch, chief investment officer of Comerica Wealth Management.

BofA data shows that three-year combined credit and debit card spending rose 23.2% in March, about the same as February, but most of those customers are low-income consumers.

Even when the number of Americans who paid off their credit cards in full hit an all-time high at the end of 2021, the figure was still just over 36%, according to the American Bankers Association.

All of which suggests that the picture for retail this year may not be as dire as some fear. However, risks may linger going forward if consumers find that easing inflationary pressures are replaced by high credit card charges.

What's more, the savings Americans have used to partially fund their purchases don't last forever, and many experts expect inflation to remain a problem through the end of the year.

The March consumer spending report is due out this week on Thursday 14 April. Today Wednesday, the Bureau of Labor Statistics will release the Producer Price Index for March.