Get VIP Trading Signals Market Watch
Trade Now Your capital is at risk.
The risk of stagflation seems closer and closer in China. Experts have mentioned that it is possible during the next quarters the second economy in the world will slow down and stagflation may be a reality.

Prices in factories are rising at a faster rate, and an ongoing energy crisis has been affecting economic growth.

Stagflation refers to a situation in which the economy simultaneously experiences stagnant activity and accelerating inflation. This phenomenon was first known in the 1970s when an oil crisis caused a prolonged period of higher prices but sharply declining GDP growth.

In China the producer price index rose 10.7% in September compared to the previous year, having the fastest pace since October 1996 when data compilation began.

What Are China’s Figures Today?

In a report filed by CNBC, analysts such as Charlene Chu, a senior macro-finance analyst for China at Autonomous Research, have mentioned that the current situation in China is delicate.

Chu told CNBC's "Street Signs Asia" that the stimulus could intensify energy demand and exacerbate the current energy shortage. At the same time, factories having to shut down several days a week due to power shortages would continue to affect economic growth, the analyst suggested. 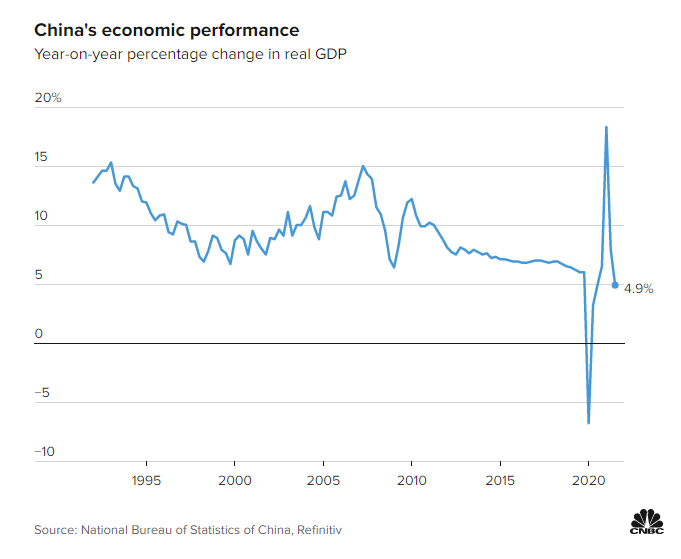 China’s economy is confronting multiple challenges. The 4.9% on-year growth recorded in the third quarter was the slowest in a year. In addition to the power crunch that has hurt factory production, a slowdown in the real estate sector has also dampened growth.

Troubles in China’s real estate sector came to the forefront in the last few months as Evergrande and other developers struggled to repay their debt. That followed a campaign by Beijing to rein in excessive borrowing among property developers.

How Does Stagflation Affect Fixed Income and Equities?

Fixed-income investors have faced a myriad of challenges so far in 2021, including low-interest rates, rising inflation, and compressing spreads.

This is dangerous for investors as it causes a vicious cycle in which the slowdown in consumer spending caused by inflation depresses company profits and leads to rising unemployment.

However, some experts consider stagflation to be a short-term risk, but not a long-term concern for investors.

Some analysts have mentioned that they believe inflation will decline as supply chain disruption slows and supply can catch up with demand again. The world is more connected than ever, and this means that when a factory closes in China, the repercussions are immediate and far-reaching.

Meanwhile, some Goldman Sachs economists forecast that third-quarter GDP will show no growth in China.

However, if we look at what the market is valuing, we can see that the bond market also believes that inflation is transitory, with equilibrium inflation rates of 2.3% on a 5-year TIPS.

However, longer-term structural forces are likely to cause inflationary pressures to dissipate as economies normalize and investor returns calmly.

In the meantime, major investors will be watching closely what happens with China and its growth in the coming months, and I must confess that I will be doing the same.