As AtoZMarkets reported on July 29, 2021, Robinhood conducted an initial public offering (IPO). The starting price of securities under the ticker HOOD was $38 with the company's capitalization at $32 billion. Investors were offered 50 million shares for purchase.

According to the report, Robinhood shares account for about 0.2% of ARK Invest's total investment portfolio. With an average share price of $38, the fund bought $46.4 million of shares. At the time of this writing, however, the HOOD share price has dropped to 34.82 (8.3% from the opening of trading). The market cap is just over $29 billion. 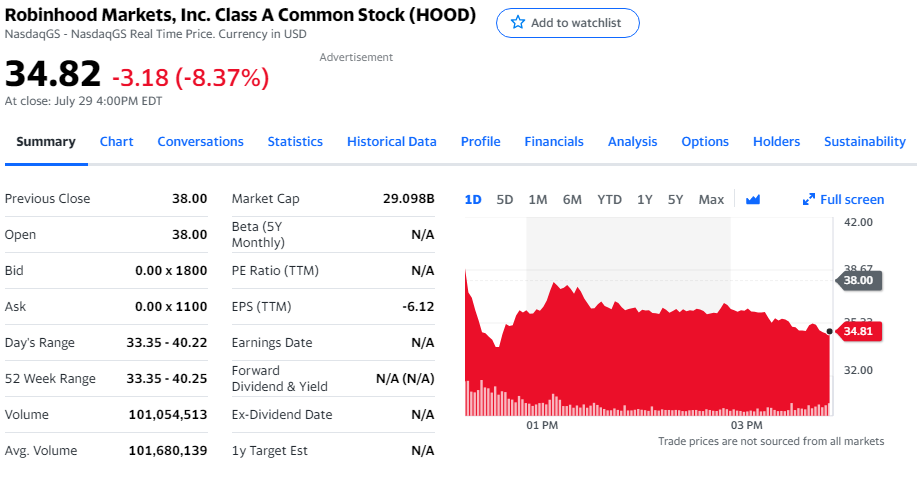 At the same time, at the moment, the price of shares of the Californian online broker plummeted by more than 12%. As reported in Bloomberg, the placement of shares at a price of $38 was held at the lower end of the range due to weak demand among investors. This listing has already been called "the worst in the history of American companies."

Recall that at the end of January 2021, Robinhood came under a flurry of criticism due to the suspension of cryptocurrency trading. The company cited "extraordinary market conditions" as the reason for the closing. Moreover, against the backdrop of a sharp rise in HYIP shares, the online broker even urgently requested a billion US dollars from financial institutions and funds.

Robinhood's actions later came to the attention of the US Congress. Recall that the broker's decision to block trading in HYIP stocks led to a collapse in their value. This controversial decision naturally drew criticism from Congresswoman Alexandria Ocasio-Cortez , Senator Ted Cruz, and other lawmakers.

In February, Robinhood co-founder Vlad Tenev personally appeared before Congress and explained the reason for stopping trading in HYIP stocks.

Here's How Investors Should Respond to Another US Inflation Surge
Broker of the month!