Get VIP Trading Signals Market Watch
Trade Now Your capital is at risk.
The leading cryptocurrency Bitcoin does not seem intent on following a course below $40,000. It was seen that the BTC price decreased to $38,600 on the first day of the week. On-chain data indicates that the drop was bought by whales. Incoming data indicates that BTCs continue to exit the exchanges. Cryptocurrency analysts have interpreted the most up-to-date data for you.

Macro markets and cryptocurrencies have been showing the uncertainty of direction for a long time. Cryptocurrency and technology stock investors especially feel this uncertainty. However, on-chain data from Bitcoin may be giving early signals of the direction of the market. CryptoQuant, which provides on-chain data, showed that Bitcoin exits from exchanges have gained momentum in recent days.

Cryptocurrency analyst Hououin Kyouma states that in parallel with the Bitcoin price falling below $40,000, the exits from the exchanges gained momentum. The analyst sees the acceleration of BTC accumulation in parallel with the price decrease quite positively. This means withdrawing BTCs from exchanges to cold wallets.

As is known, the withdrawal of assets from the stock markets shows that investors are not thinking of a sale in the short term. Analyst Kyouma states that the decline of the Bitcoin price below $40,000 is seen as a buying opportunity from the bottom by the whales.

“This suggests that whales may have jumped at the opportunity to raise more leading cryptocurrencies. In previous examples where exit values ​​were observed on a similar scale last year, the BTC price soon saw a spike.”

Analyst Minkyu Woo, who shared on the CryptoQuant platform, drew attention to whale purchases based on the currency outflow metric. Woo underlined that this metric shows the amount of Bitcoin coming out of all exchanges. The experienced analyst reported that the BTC price, which fell below $40,000, made a jump in the metric.

Evaluating the current on-chain data, Woo pointed to Bitcoin whales, just like analyst Kyouma. Woo stated that large values ​​seen in the metric could mean that Bitcoin whales are buying. The analyst shared the chart below. Woo underlined that the decrease in BTC price correlated with the currency outflow metric:

“As you can see in the chart above, Bitcoin's exit from exchanges has increased tremendously recently as the price has dropped below $40,000.”

Cryptocurrency markets are trying to find a price within the FED and inflation equation. Due to increasing macro pressures, Bitcoin is pricing far from the $47,000 level it was at at the beginning of the year. Phenomenal analyst Rekt Capital states that similar movements to current price levels have been seen before.

Rekt Capital, which recently shared on Twitter, examined a similar period when the Bitcoin price was previously rejected from the $47,000 resistance. The phenomenon analyst pointed out that a similar price movement of BTC has been seen before, pointing to September 2021. Rekt Capital points out that there was a bounce from the $41,300 support in September last year. 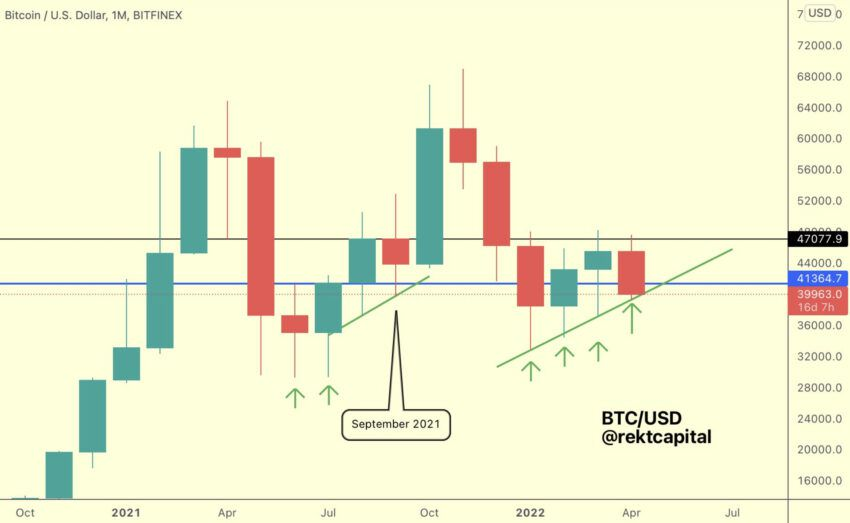 Cryptocurrency analyst Michaël van de Poppe thinks that a rise above $42,000 will turn the trend in favor of the bulls. Poppe states that the approach of the Bitcoin price to the $40,000 band poses a threat to his long positions:

“For Bitcoin, this is a pretty standard playing field. First we look at the $42,000 barrier for a breakout, this area constitutes a trend breakout. Otherwise, the $40,000 region is where I would want to check the longs.”