While cryptocurrency world sees numerous coins being born every single day, we take you back to 2014 to recap the creation of one of the most interesting and unique cryptocurrencies out there – DASH. What is Dash? Let’s explore together.

29 January, AtoZForex – Cryptocurrency market craze has overtaken the world back in 2017. However, it seems that some of the top 2018 cryptocurrencies have lost the steam during the first month of the year. Nevertheless, cryptocurrency enthusiasts do not lose their positivism, as some of the coins start showing signs of uptrend.

Since major cryptocurrencies are trading sideways, maybe it is time to look into some alternative coins? That’s exactly what we will do today – let’s discuss the basics of one of the most interesting digital currencies out there, DASH.

DASH is a cryptocurrency that was previously known as XCoin (XCO). XCoin project was released back in January 2014. The XCO coin has become Dash (DASH) after being called Darkcoin.

According to the developer of DASH, Dash Duffeild, the coin is a result of an idea to come up with faster and more private coin that Bitcoin.

Some special features of the DASH include:

After DASH coin has been released in March 2014, following rebranding, the price of the coin has been trading at a quite steady pace until the March 2017. But then in March of the last year, the market has seen a bullish trend, which has pushed the price of DASH to the all-time high of $1,595.21 on December 21st, 2017.

After hitting the record high, DASH saw a huge correction to around $626 per coin, which accounted for 55.26% decline. Yet, afterward, the DASH coin has managed to climb back to the positive territory, while now one DASH token would cost you $758.01. 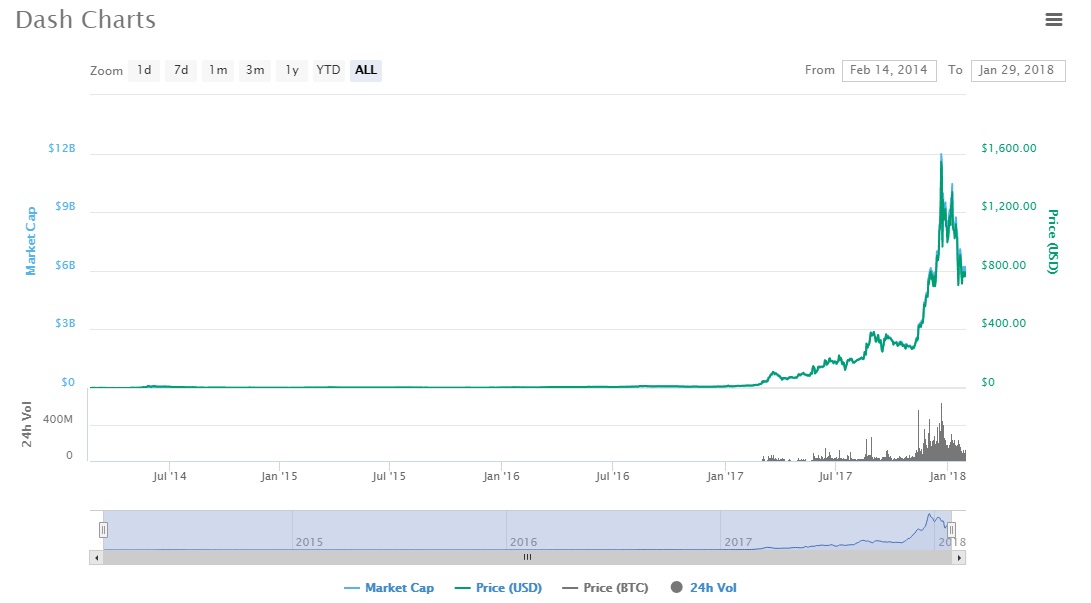 The maximum amount of Dash coins that can be in supply stands at 18,900,000 DASH. Nevertheless, as of the moment, the amount of circulating DASH coins is 7,846,850 DASH, which is less than 50% of the overall supply.

Where can you buy DASH?

There are various exchanges, where you will able to buy/sell DASH. Some of the most popular choices: