Weiss Ratings upgrades Bitcoin score to B-, thanks to the recent BTC price stability in comparison to other coins. The agency also took into account “an increase in Lightning Network adoption.”

According to the Weiss Ratings, these are 12 weakest cryptocurrencies that investors should avoid: 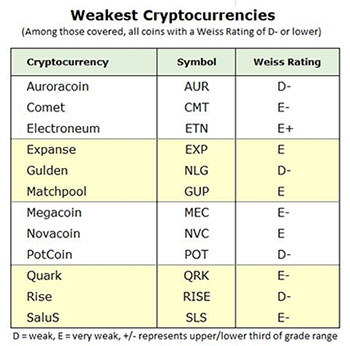 The Weiss Ratings’ scale is from A to E, as it takes into consideration coins’ investor risk and rewards along with the underlying technology and adoption fundamentals. As per the scale, D is considered “weak”, where “E” is “very weak.” Moreover, the plus and minus signs stand for the upper and lower third of each grade, respectively.

It is noteworthy that Weiss Rating updates its rankings on a regular basis, therefore, it is recommended to check the official website of the agency as often as possible.

According to the January Weiss Rating grades, Bitcoin scored a C+, which stands for “fair.” Ethereum has got a B (“good’). Cryptocurrency Steem has earned a B- grade. Weiss Ratings did not give any cryptocurrency an A rating.

In the most recent report, Weiss Ratings has awarded Bitcoin a B- score, which stands for “good.” The upgrade took place thanks to the price stability in comparison to other coins. The agency also took into account “an increase in Lightning Network adoption.” The report has stated:

“In any scenario, we’re aware of, we see some roadblocks to Lightning Network adoption.

While we continue to monitor its progress with interest, our Technology Index is not designed as a crystal ball of future upgrades, but as a tool to evaluate the state of the art as it stands today. Thus, as soon as the Bitcoin network becomes more efficient, our ratings model, updated daily with new performance data, will reflect the improvement.”