Historically Switzerland has always been a safe place to stack up cash and protect your capital from economic threats. This is how the Swiss got their trust. These guys are so focused that they did not even bother with neither of the World Wars while the whole world was going down in their neighborhood.

Step by Step Swiss Franc Black Swan History shows us the principles of the economy and how those principles lead to last week's catastrophic market developments. .

After the 2008 financial crisis, the Swiss once again started to become as a Safe Haven for the world wealth. By the time the European debt crisis hit record highs in 2011 and 2012 the Swiss franc demand hit record highs pushing the CHF value higher and higher. 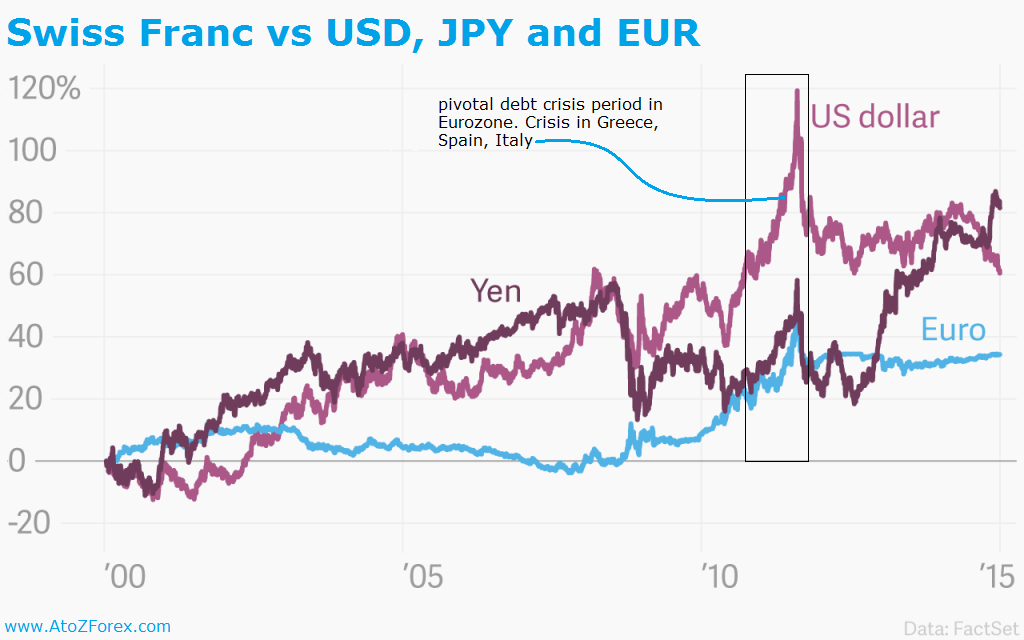 What about Swiss exports?

SNB did what they had to

As the Swiss exports were troubling due to overvalued Swiss franc, the SNB did what they had to protect their export based economy. In September 2011 the SNB imposed the 1.20 EURCHF floor and committed themselves to protect the floor.

How can you put a cap on a currency where there is free market?

The SNB vowed to do everything in its power, print money to equalize the supply and demand. Basically they used the freshly printed SNB francs to purchase foreign currencies.

Was it same as what FED did with its QE program?

No, by printing or creating money and purchasing foreign currencies the SNB was exposing the Swiss economy to potential losses that would go beyond the bank’s capacity.

Meanwhile the US FED was printing money and buying US government bonds. They could hold on to these bonds until their final maturity date being confident that the purchase will pay back.

Additionally the US is economy is among the most indebted 7 economies of the world while the Swiss always kept their debt under control at lower levels. 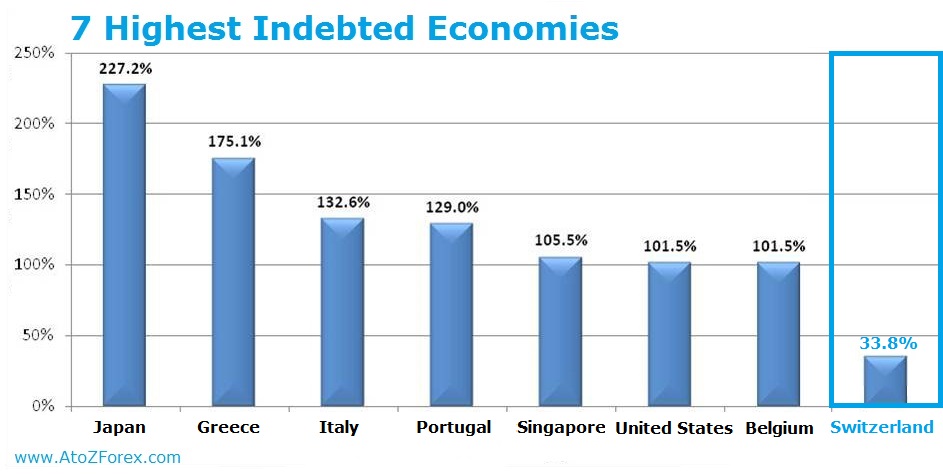 As the Euro zone struggled to get out of the financial crisis, the SNB was pushed to buy more and more foreign currencies in order to keep up its commitment, which ended up the SNB’s foreign currency growing as much as 75% of the Swiss GDP in 2014 vs. 9% in 2009.

Everything is for the good of the domestic economy

The SNB was committed to its Euro vow not because of a jest; it was due to the fact that Europe is the largest economic partner of Switzerland and the SNB aimed to have their domestic economy benefit from this close partnership. As long as the economic equation made sense, of course the SNB would keep on printing money and buying foreign reserves.

Last week the European Court of Justice ruled that the European Central Bank’s government bond buying program is compatible with EU treaties. The announcement increased the risk factor as the ECB began taking Greek bonds as collateral against loans to entities such as the already struggling Greek banks. Although the number might not be 100% accurate it is expected that the ECB is exposed to €150-€190 billion of Greek debt, out of the €340 billion total.

On top of the existing Greek burden the ECB has the ECB president Mario Draghi has also signaled an upcoming QE tsunami. All in all the SNB was forced to re-calculated its economic formula. Would the Swiss economy be able to absorb such a gigantic risk? The answer was “NO”

SNB did what they had to

As the bank would be very vulnerable to ECB’s QE plan, the SNB broke its vow and said “It is enough for us; you deal with your own problems”. In response, the safe bet Swiss Franc once again became the safe haven currency gaining massive value within minutes.

Majority did not expect such a drastic move

The SNB decision caught majority of the industry players off-guard. Swiss franc within minutes gained some 40 Euro cent against Euro, and across the Forex market Franc hit the market stronger than the Japanese tsunami.

However as Strong franc means more expensive Swiss products in the market the Swiss stock market SMI collapsed by 13.3% for the week making it as the biggest loser for the stock market while majority of the European stocks were on the rise.

Strong Franc will not help the Swiss

For an economy which breathes on exports, Swiss economy is likely going to be struggling in 2015. Already the Swiss Consumer price index have been on a free fall since 2008 and was on -0.3% for the last reading.

It is likely that, the Swiss economy will not have inflation but a strong deflation in 2015 as a result of cheaper imports.

What to expect next from Europe?

History is history, we can not change it but we can learn and apply the changes to the future. That is why earlier we provided a list five lessons learnt for traders. But the list might grow this upcoming week as we are off to highly anticipated eventful week.

First off, the ECB will kick off its bond buying program on the 22nd of January as the European Court of Justice gave a green light for the bank. This means there will be more Euros flowing into the economy. And as we all now Supply and Demand are the core of the economics. When the supply grows the value drops, this means fundamentally we may expect the Euro to be on the fall for the week to come.

We also have the Greek elections on the 25th of January, which markets are already ready for any surprise as the Greek leftist party Syriza is expected to win the elections.  Syriza has been pushing Greece to re-negotiate with Europe on the terms of the Greek bailout and threatens the officials of leaving the Euro zone.

Elsewhere in the world...

To sum it up, the events from last week revealed that nobody, even the most secure central bank of the world can go against the market and the market will always win, hence the SNB rose the white flag.

This rises attention for those of economies where the central banks are doing all they can to protect their national currencies against fluctuations by purchasing foreign reserves. As an example here would be China. The Chinese Yuan is strictly controlled by the Chinese Central bank. The list is not limited to China only, we have Denmark, Hungary, Singapore on our list where the central banks could anytime bow the market.

Remember, the trend is your best friend.