In this Patron ICO Review, we will look into the key problems this project aims to solve and the primary advantages it will bring to the modern world. Patron ICO token Pre-sale has started on the 1st of February.

1 February, AtoZForex – In this constantly evolving world, numerous ICOs are being born every day. However, not all of them are genuine projects, and it is vital to carry out thorough research prior to investing in any of them.

Today, we want to draw your attention to one of the most promising projects that have its roots in Japan, one of the most developed cryptocurrency markets in the world. We have our eyes on Patron – the sharing economy for influencers.

What is the Patron project about?

This project is a mixture of the modern trends, where the community is largely influenced by social media. Patron plans to tokenize the influencer social media (SNS) and connect brands with social influencers globally.

In fact, this has been going on for some time on social media – popular accounts have been collaborating with various brands to represent them and provide more exposure. Ultimately, it is a win-win situation for all the participating parties – social media and brands advance their reach, and the public gets to know new information via the social influencers they follow.

The Patron project aims to utilize the Blockchain technology to help social media influencer focused brands and influencers themselves to develop their businesses. It will enable influencers and social media users to publish, discover, reserve, and sell the data on Patron’s platforms on both web and mobile.

What are the functions of Patron?

According to the official information provided in the Patron’s whitepaper, the core functions of PATRON are:

The mission of the Patron ICO

The project intends to create next-generation services for influencers and provides a platform that gives equality to influencers. A statement on the website of Patron states:

“We want to make a global impact on the level of Apple and Google and bring Japan’s thriving tech and influencer scene to new markets. Over the past four years we have worked with influencers and social media. We have the network built, the experience, and the technological expertise to make this dream a reality.”

What are the advantages of Patron?

At the moment, the SNS marketing fees are standing at 40% globally. The project introduces a smart contract technology that provides a way of eliminating brokerage fees. This will advance influencers’ income as well as decrease client payments.

This project aims to raise funds for the following causes

The project will distribute 240 million PAT during the ICO process out of the total supply of 400 million coins. 160 million PAT is allocated to Patron and is used for distribution to board members and advisers of Patron. 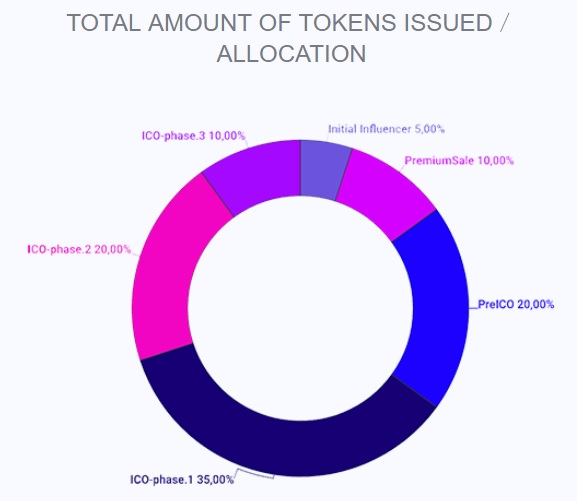 The leader of the project, who also advocates "influencers" in Japan.

According to the information in the WhitePaper:

One of the major advertising agency creative producers with foreign capital affiliate.

The lecturer at Credit Suisse corporation of securities.