April 26, 2019, | AtoZ Markets - Sportswear giant Nike has recently filed for a trademark “CRYPTOKICKS” with the US Patent and Trademark Office (USPTO) for use in a wide array of blockchain-related goods and services. Does Nike CryptoKicks trademark application mean that the company is ready to embrace the crypto industry?

On April 19th the sports apparel giant Nike secured a trademark for “CRYPTO KICKS” giving a hint to its plan to pursue a wide array of blockchain-based services. The news was announced by Josh Gerben a founder of Gerben Law Firm. The trademark attorney wrote in his Twitter : 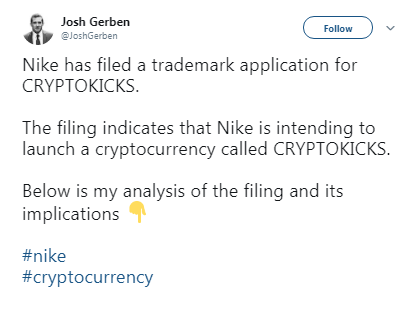 It is important to keep in mind the fact that Nike CryptoKicks trademark registration allows the company to obtain a legal presumption of ownership of a mark throughout the country, as well as exclusive rights to use it due to the wide range of goods and services specified in the application.

In other words, the corporation can use “Cryptokicks” in multiple ways including cryptocurrency software, tokens, networked IoT devices and more.

To support his statement about NIKE intentions, Gerben uploaded an analysis of the Nike CryptoKicks trademark filing and commented on it. The trademark lawyer noted :

“ It appears to be a filing for a brand of a cryptocurrency” which will be “providing a digital currency or digital token for use by members of an online community ”.

Gerben suggested that “any services or goods such as apps or software applications related to the filing would support the idea of a Nike crypto”. He explained, that as the trademark had been filed on a “1B”, the company has intentions to use the trademark.

Nike is taking over the blockchain market?

Along with the aforementioned application, in one of the crypto news media reports, Nike mentioned about its upcoming mobile app with an associated coin.The company representatives described their project as: “Downloadable computer software, namely, an electronic financial platform that accommodates multiple types of payment and debt transactions in an integrated mobile phone”

Recently, the sportswear giant reported that its digital business branch helped them earn more than $1 billion in quarterly revenue for the very first time in the company’s history. This quarterly sales growth actually represents a 36% rise when compared with the same period of sales last year.

After Nike CryptoKicks trademark application announcement, the company’s competitors will have 30 days to submit counters to the application that will be reviewed by The US Patent and Trademark Office.

If the trademark is granted to Nike, the company will receive legal rights over the name “cryptokicks” for 4 years. However, it will be obliged to launch a commercial product with the exact same name (cryptokicks) so that the trademark is fully valid and essentially, granted.

This could be considered as a positive signal for growth and recognition of crypto. However, such claims also contrast sharply with the open-source and censorship adverse community that bitcoin has supported. The industry grows, corporations like Nike are searching for ways to commercialize blockchain technology and profit from the enthusiasm around it.