Even impossible says “I’m Possible”! Many would have said that a publicly listed company cannot have an ICO, yet NAGA is doing it with NAGA ICO, even making to our top 11 promising coins list. So, I’ve decided to talk to NAGA’s very own Yasin Qureshi and Benjamin Bilski. My aim is just to touch base on NAGA coin forecast and projections before you can trade NGC on HitBTC.

14 December, Cryptocurrency news– NAGA ICO is not just about a token sale, it is about adding value. As a crypto sceptic, I only look into what issue every new blockchain project solve. Only if I see direct blockchain application and a strong team, then I would invest a dollar or two. But, what about NAGA ICO? How do they aim to connect Virtual Goods ecosystem to financial markets and Cryptocurrency world? I’ve decided to talk to their founding team.

“We have reached a historic peak of centralization. Decisions in large institutions and organizations are domineered by politics – it is primarily about “who you know” and not “what you know” (forget about “what you do or innovate”).

Innovation is being suffocated whilst producing unnecessary and costly overheads (without any benefits for the user) and obsessing about “administering yourself”. I have experienced this first hand – it is the reason why I quit banking (the bank that I have literally built from scratch for almost 20 years).

NAGA wants to achieve decentralization and aims to build a bridge between the financial markets, the crypto-currency space and virtual goods to open trading and investing to almost everyone.

NAGA focuses on the user. We believe in autonomy and libertarianism. NAGA believes in access for everyone. NAGA is aiming to provide the users with incredible benefits.”

“We will use the capital raised in the token sale primarily to grow the token economy; to make sure the number of users and hence the demand for the tokens as well as the token price grows.

This requires ongoing investments in marketing. We focus on the token economy and its growth – which requires consistent scaling – and scaling requires capital.

We are not using the funds to start a blockchain but the token economy. To grow an existing, audited business – with a proof of concept – and make it migrate to the blockchain world. This requires funding.  Every business requires marketing to grow, and this is especially true for an entire economy.

In other words: the value of a company or economy increases in relation to the amount of funds raised.

If you are funding a business, YOU also determine the value of the crypto-economy.

All parameters and percentages remain in proportion – regardless of the amount of money that has been raised. 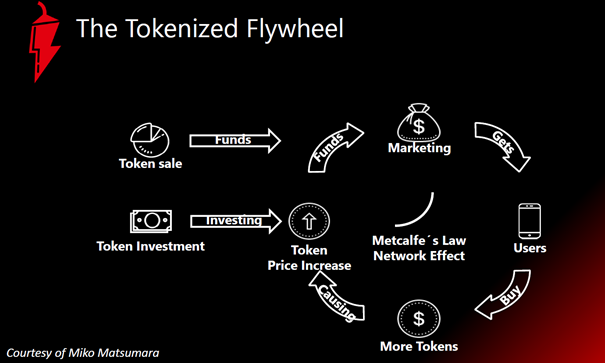 This illustration represents the common understanding of the dynamics of any economy.”

“Roger Ver has a very libertarian mindset. This is in line with our core mission.

Furthermore, the NAGA ICO is different to most ICOs that have ever been performed in terms of substance, traction, backing and transparency.  On top Roger has contributed a lot to the crypto-community. He was one of the first believers and significant investor to numerous companies who are essential for the entire ecosystem.”

“The NAGA coin has various use cases of which the first ones will go live in January, way ahead of our roadmap.

After the successful launch of cryptocurrency CFDs, such as Bitcoin, Ethereum or Litecoin, within SwipeStox we are now taking it to the next level. We are allowing all users to use cryptocurrencies as collateral via a real-time calculation to fund their SwipeStox trading accounts. We’ve seen a huge demand to allow crypto-investors to use their tokens in order to participate in trading the global markets. After the release of NGC tokens by the Naga Development Association Ltd., it was a logical step for us to accept the NAGA Coin as unit of account within our financial ecosystem. Our new mission at SwipeStox and NAGA is not only to facilitate the trading of cryptocurrency with cryptocurrency, but to also establish the world’s leading social trading app for crypto-investors.

With adding virtual goods via the integration of our platform Switex – a joint venture with the German Stock Exchange (Deutsche Boerse AG) as well as with introducing i.e. the NAGA Debit card NAGA will provide users with a truly diversified portfolio of use cases and unique benefits. We are confident that this portfolio as well as its benefits will lead to a sustainable and growing token economy.

Funding trading accounts with cryptocurrencies will be available on the SwipeStox iOS, Android and Web applications from 19.12.2017.  The support of NGC as a unit of account and investment currency is planned for January 2018. This is 4 months earlier than what we originally planned.”

NAGA team is currently negotiating with a few Crytpo exchanges at the moment. Meanwhile, NAGA Coin exchange will be possible on the 22nd of December at 12 noon on HitBTC trading platform.

If the NAGA team is able to make a deal with a few of the big Crypto exchanges it will also have an impact on NGC price as well.