Cryptocurrency investors are always on the lookout for the next big altcoin. Since we are at the end of 2017, and Bitcoin is hitting astronomical highs, it is safe to assume that the new year may see the rise of some promising altcoins. Let's take a look at some 11 Promising Coins to Invest in December 2017.

This is a sponsored article, AtoZMarkets might have received compensation to post this article from one or more of the coins mentioned.

28 November, AtoZForex - Did you know that out of approximately 1,324 cryptocurrencies today only around 10% display potential according to The-BitcoinPro.com app? With the world gearing up to welcome the new year, investors are keeping a close eye on the cryptocurrency markets. Just which altcoin is poised to skyrocket in 2018?

To avoid confusion about the many altcoins, let me run you through a list of promising coins to Invest in December 2017.

11 Promising Coins to Invest in December 2017

Naga coin comes with a strong tokenomics behind. The company went for an IPO earlier in German Stock exchange. Since their IPO Naga stocks have appreciated in value as much as 400% percent. Now, they want to disrupt the gaming industry and financial trading with the help of blockchain technology.

Ark seems to be a very promising cryptocurrency to invest in at the moment. Its platform is designed for mass adoption in order to offer services according to the customer's choice. Some key features are fast transaction speed, optional privacy, physical card system and an interplanetary file system.

With its highly flexible and adaptable nature, the coin looks likely to increase in value soon.

Siacoin is a decentralized cloud storage platform. It allows anyone to rent out their storage space and in return rewards them for their contribution. Usually, cloud storage services are centralized and the data is stored on a third party server. However, in Siacoin, users contribute to the decentralized storage with their own share of resources.

Currently, Siacoin is ranked in the top 40 of all coins based on the market cap, trading above $200 million dollars.

There are at least 28 billion Siacoins which are ready to hit the cap of over 40 billion soon enough. The factors influencing Siacon's appreciation are the limited storage and amount of coins. 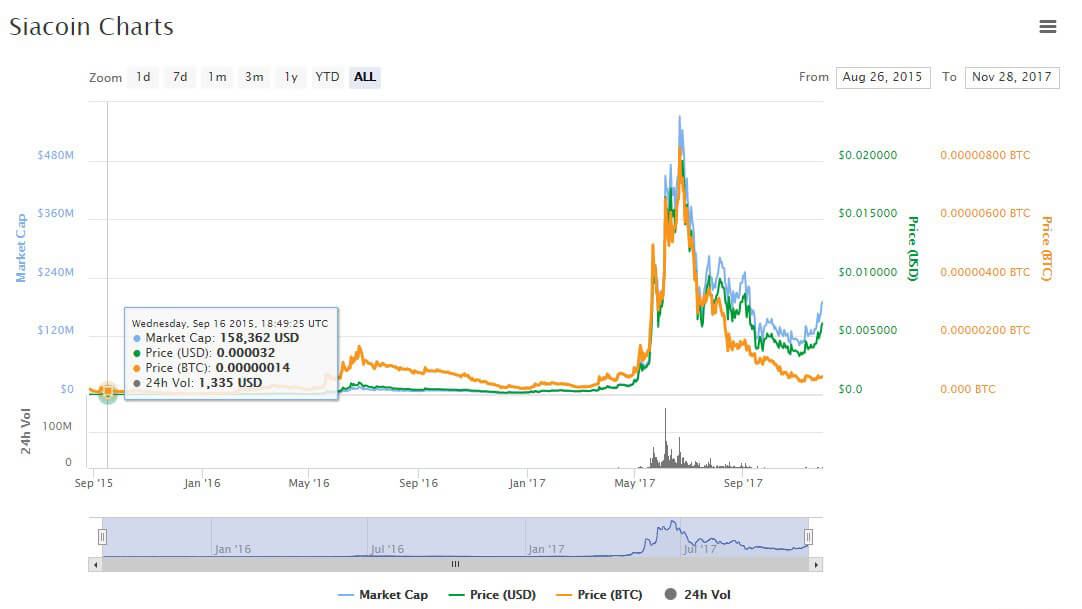 Monero isn't exactly new to the markets, but it is one of the early altcoins with a strong emphasis on anonymity. It also enables a system that makes it possible for only the sender and the recipient to decipher the cryptographic hash of the destination address.

Currently, it is trading at around $189. Monero looks set to rise in value due to its status of being the currency of choice to trade in the black market. 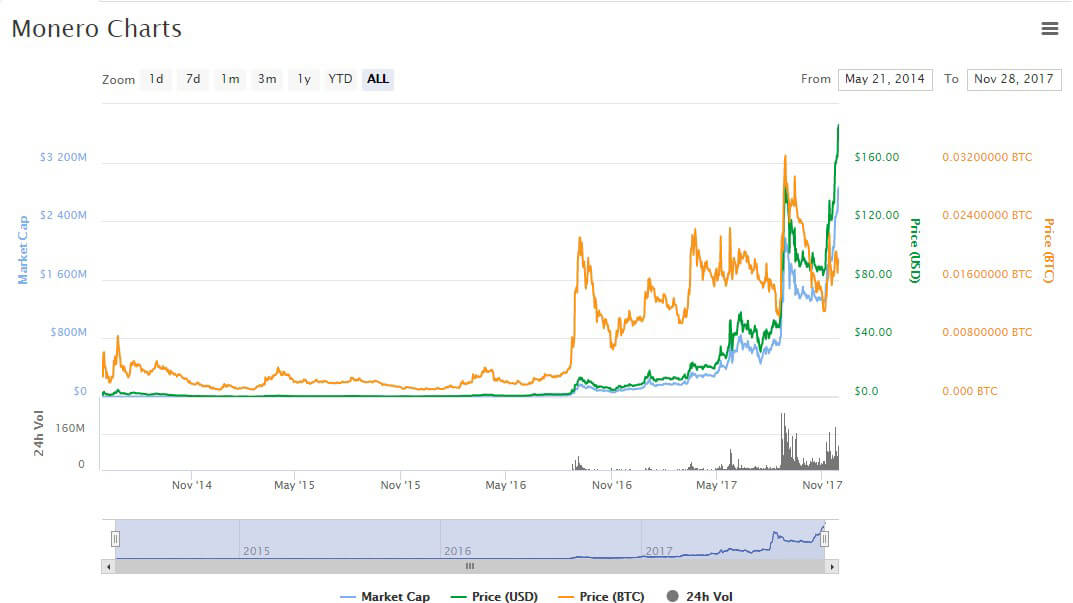 At the beginning, Ethereum was considered to be the best alternative to Bitcoin. Moreover, the number of transactions on the Ethereum network is already significantly higher than those using the Bitcoin blockchain.

Another reason to invest in Ethereum is the fact that it uses smart contract for sending and receiving coins. Ethereum’s system manages agreements between each other and ensures that payment is made under the performance of the agreement. I believe it may surpass Bitcoin someday.

The current price of Ethereum is above $400. 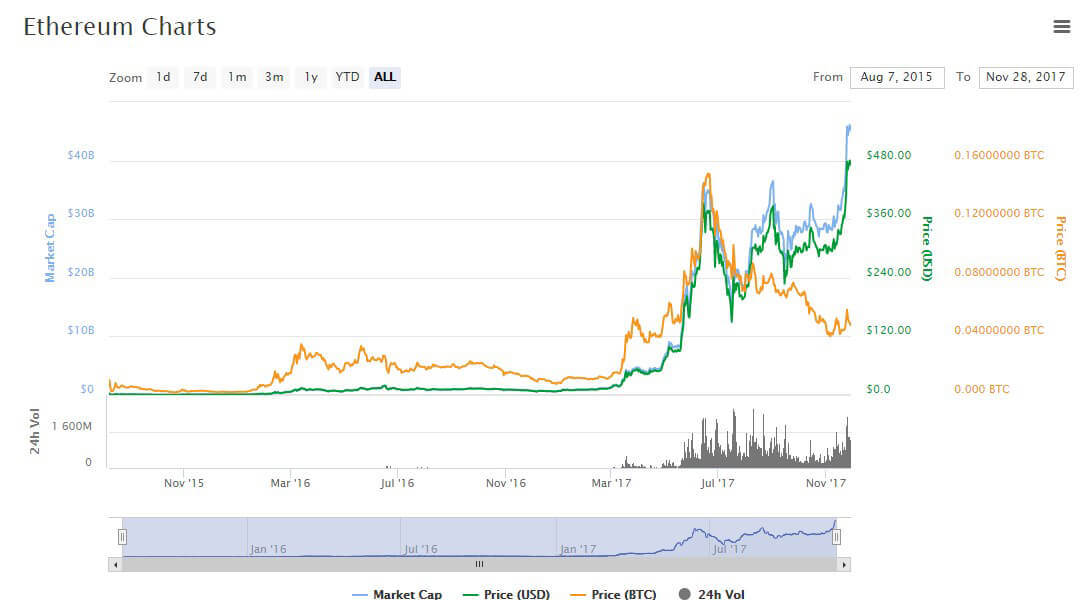 This means the more transactions on OMG, the more investors make money. It can also be exchanged into both fiat currency and cryptocurrency. It seems this is also another flexible coin and it's price looks set to rise, that is why it made it our list of Promising Coins to Invest in December 2017. 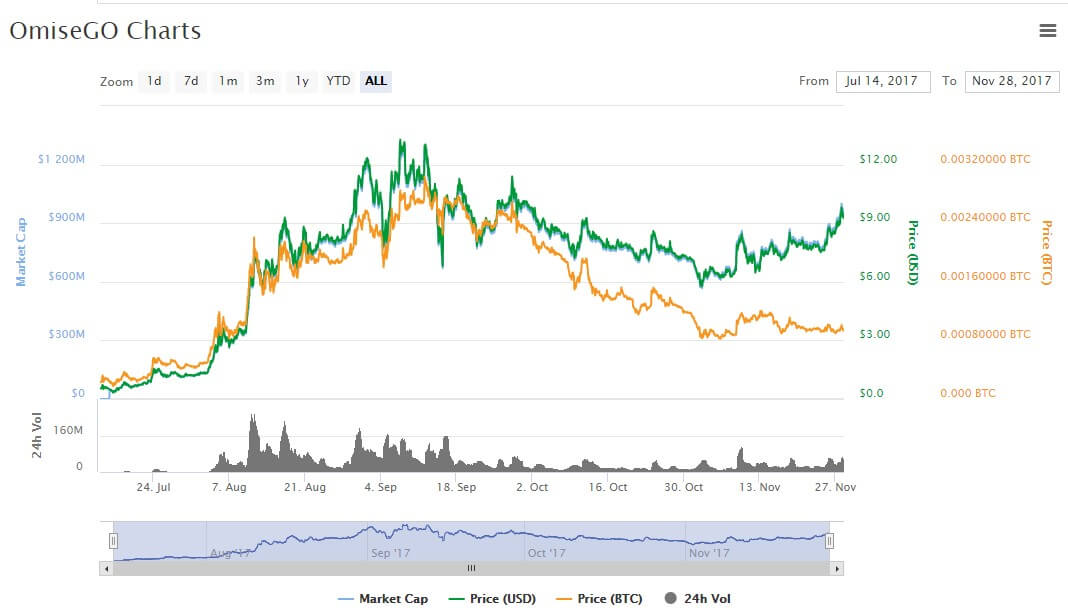 Here we come to an altcoin, which doesn’t operate on a blockchain. Iota uses a “revolutionary” new ledger that is supposedly an upgrade to blockchain architecture. It is based on on a different distributed ledger called Tangle.

It has unlimited transaction rate with zero fees and no miners. The coin also allows for small nanopayments. Additionally, you can’t split a coin i.e. Bitcoin. 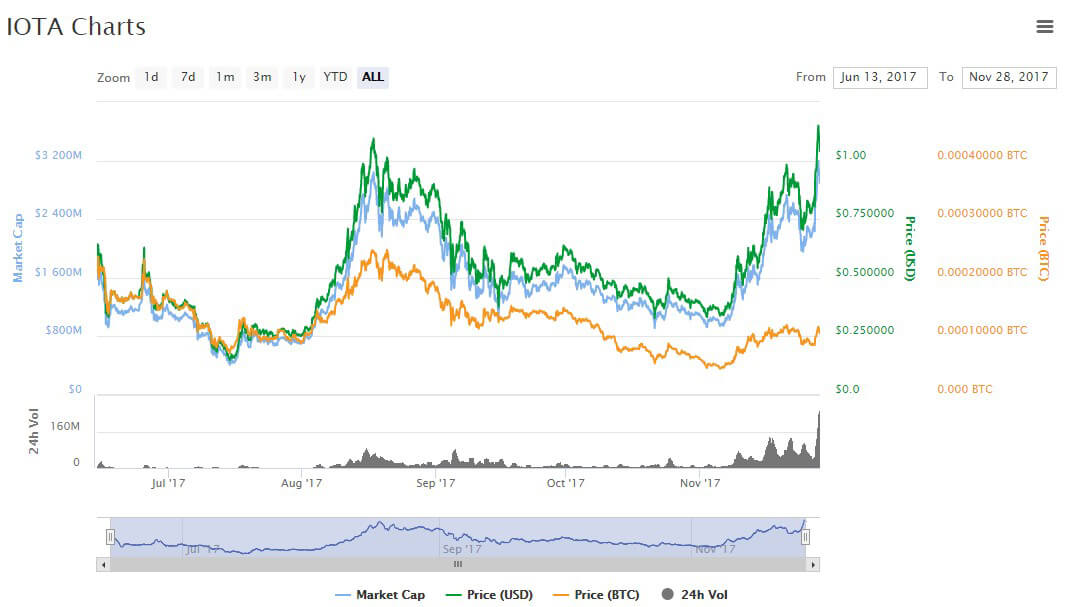 Aragon is a successful ICO and the second largest in the blockchain technology next to only ‘The DAO’ raising more than Aragon’s $25 million. It has a decentralized platform.

I guess this is another promising coin to Invest in December 2017. Although ANT tokens have been steadily declining in both BTC and USD terms there is still a lot of technical progress going on with the product. And this makes it a contender for investment. 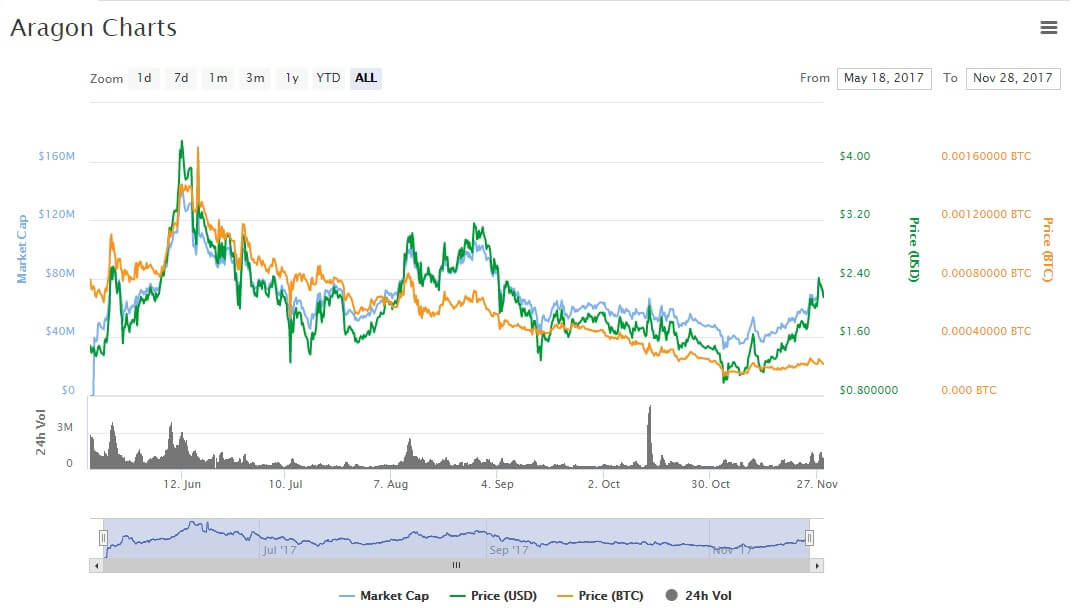 Stox (STX) is an Ethereum-based, open source platform designed for markets where users have the possibility of trading the outcome of events in various categories. The open-source platform allows investors to profit from prediction events by leveraging their knowledge. It also is known as a prediction market platform.

Moreover, Stox has the most feasible path to mainstream adoption as the company behind the project owns Invest.com, an online investment house with over 3 million registered users, 8 million annual transactions, and an annual transaction volume of $12 billion. 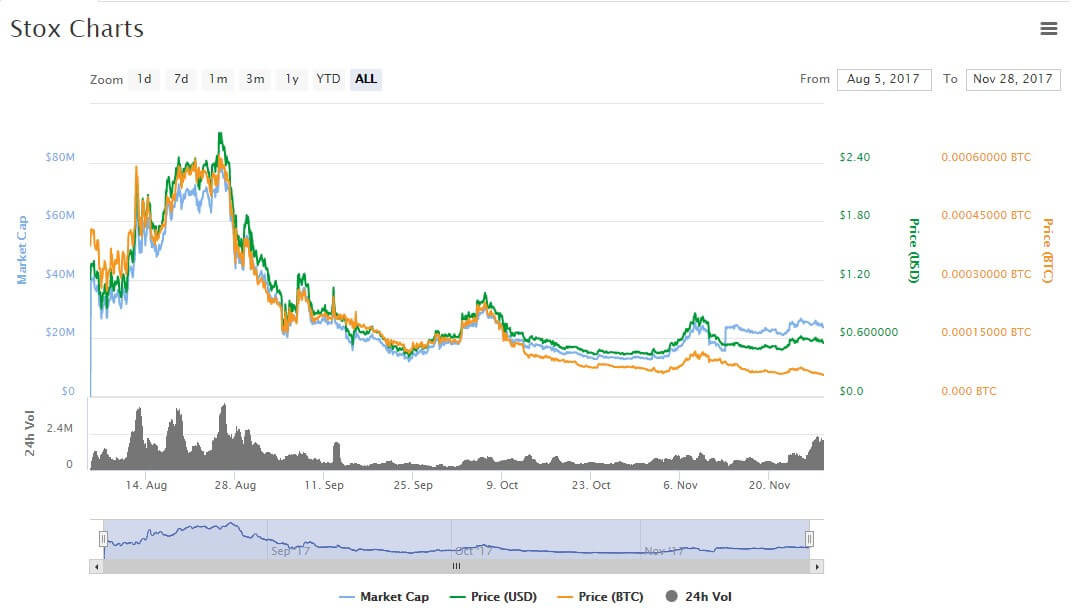 Blocktix is an Ethereum event ticketing platform. It combats scalping, while substantially reducing costs and increasing access for small promoters.

There are two reasons why I prefer Blocktix. Firstly, with a market cap of $7 million on nearly two-thirds of the total supply and a very large target market, it looks cheap. Secondly, its project has clear and credible plan to reach mainstream users outside of the cryptocurrency community; that is something which many projects lack and which I think is incredibly important

However, Blocktix will use funds from their ICO to put on a series of events, aiming to introduce as many new users to the platform as possible. 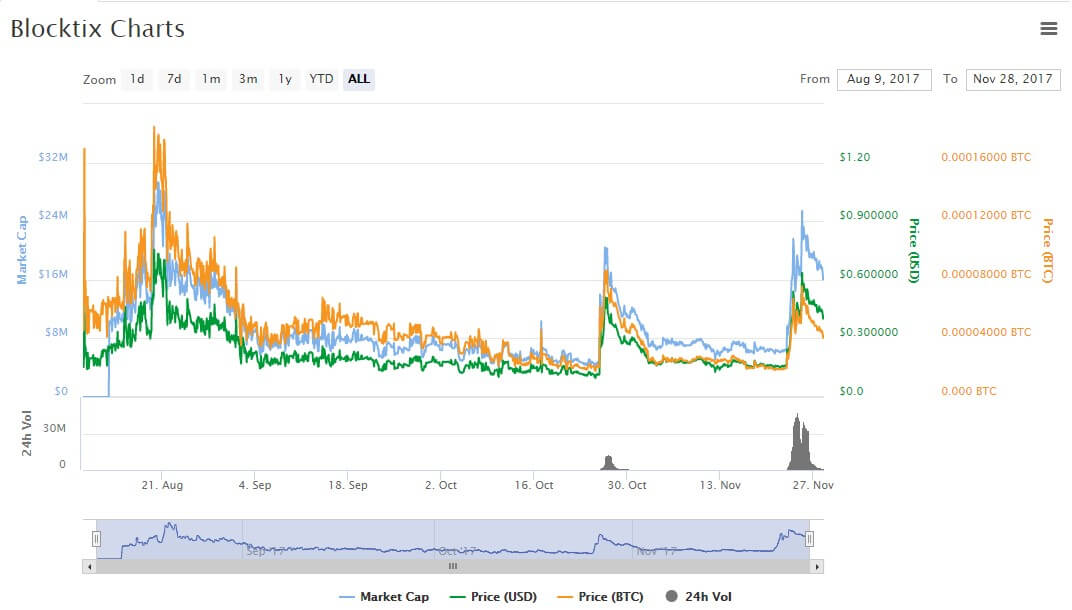 Litecoin is an alternative to Bitcoin that aims to fix several issues that are holding Bitcoin down. However, this altcoin has adopted the Segregated Witness (SegWit) technology. It also adds capacity to the network and lowers transaction fees. Litecoin's price has gone up considerably in the last two months.

Currently, Litecoin is trading above $90. 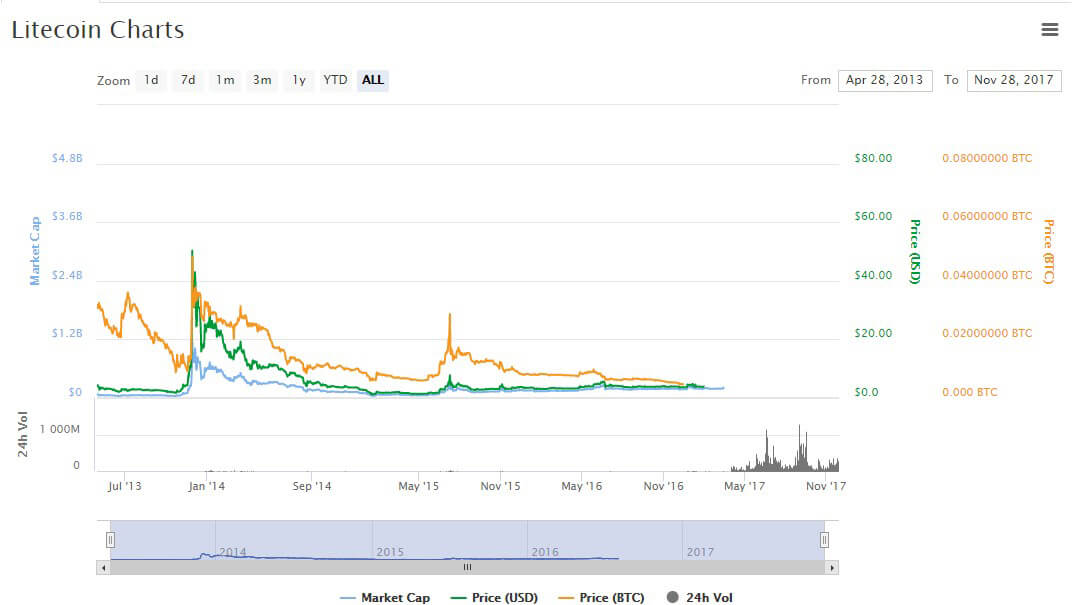 Nonetheless, you must always do your own research. Cryptocurrencies carry high level of risk and you should never buy or invest in any of these assets just because someone said or wrote something.

Think we missed something? Do you know any other promising Coins to Invest in December 2017? Share your opinion with us in the comments section below.