March 5, 2019, | AtoZ Markets - On March 4, the Ledger development team posted a warning on social networks in which users are not recommended to use the Nano S Monero (XMR) application. The warning message indicates that the problem occurs when using the latest version of the Monero client with the application 1.1.3.

An error related to the application was detected earlier when a user named MoneroDontCheeseMe posted a statement on Reddit. MoneroDontCheeseMe report noted that in his opinion, "he just lost ~ 1680 Monero (about $ 80,000) due to an error." The user stated that after transferring about 0.000001 XMR from the storage to the wallet for the annual check, the user sent another 10, 200, and then 141.9 XMR. According to the report, before making the last transaction, MoneroDontCheeseMe had about 1690 XMR in the wallet and 141.95 XMR on the unlocked balance. The Reddit user decided to send 141.9 XMR and after the transaction, the user's balance showed 0 XMR.

Approximately two hours later after MoneroDontCheeseMe post, the Ledger developers posted the aforementioned warning in the Monero subReddit, and the official Monero account on Twitter and distributed a tweet containing a link to the warning sent from the official Ledger account. Monero team members did not respond to a request for comment at the time of publication. 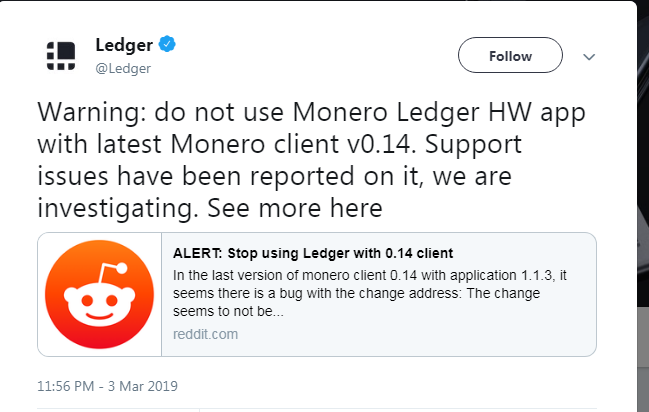 Commenting on the MoneroDontCheeseMe post, Nicolas Bakka, technical director of Ledger, said that the most likely scenario of the Monero bug is a synchronization problem. However, a warning issued later with an indication of a problem with an address change confirmed that this was not the case.

According to CoinMarketCap, Monero that was launched on April 18th, 2014 is the 13th largest market capitalization of cryptocurrency with price $48.63 USD and Market Cap $818,643,653 USD. Monero (XMR) is private and untraceable and known for being used by hackers or crypto jackers. In February, appeared news that a new hacking tool is being distributed among Windows users in an attempt to install malware for mining cryptocurrency. At the end of last year, the cybersecurity researchers showed how they managed to crack Trezor One, Ledger Nano S and Ledger Blue cryptocurrency. However, the next day, Ledger published an announcement that they regret that the researchers did not disclose the results responsibly and that the discovered vulnerability is not critical.