Bitcoin miners have created over 88% of the total BTC supply—but how many are left for miners to mine and unleash into the market?

September 28, 2020 | AtoZ Markets – The total number of mined Bitcoin (BTC) in circulation has reached over 18.5 million—out of a maximum of 21 million—over the past weekend, according to block explorer Blockchain.com. 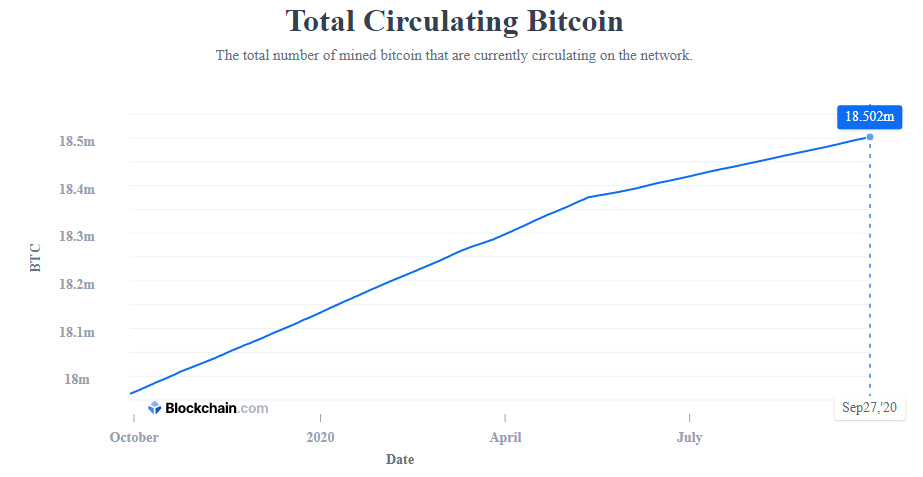 As a result, there is less than 2.5 million or about 11.9% Bitcoin left for miners to generate. However, over 88% of all bitcoins are already mined.

Miners will mine the last Bitcoin in 2140

The last Bitcoin is will be mined in the year 2140 after which no new BTC can be mined. This is because, in time, miners' rewards for discovering a new Bitcoin block get smaller. Their reward is slashed by half every 210,000 blocks (or roughly every four years) during halving.

Bitcoin network has already undergone three halvings. The last BTC halving occurred on May 12 and reduced block rewards from 12.5 to 6.25 BTC per block. Miners' reward will continue to decrease every four years until the very last satoshi—Bitcoin’s smallest unit— is discovered.

Why only 21 million BTC in existence?

Currently, the reason why Bitcoin’s total supply was limited to 21 million coins by its creator Satoshi Nakamoto is unknown. However, there are some theories.

One explanation for the limit is the money supply replacement theory. An alternative suggestion is that the limit could be mathematically extrapolated from Bitcoin's operating parameters.

In the first instance, the entire world's money supply was approximately $21 trillion when Bitcoin was born. If Bitcoin eventually replaces all fiat, then each BTC would be worth $1 million while each satoshi would amount to $0.01. At the same time, while those two figures remarkably resemble each other, we can only guess whether it was a coincidence.

The second theory is quite simple. Mathematically, Bitcoin’s emission limit is tied to its halving cycles—since we roughly know when all the halvings are going to happen and can extrapolate it forward. Currently, the sum of the block rewards for each cycle equals 100 (50 + 25 + 6.25 +3.125, etc). When you multiply this number by the 210,000 blocks/cycle figure, we get the maximum possible supply of 21 million.