30 September, AtoZForex.com, Lagos – AtoZ reported earlier on that FXCM was notified by the New York stock Exchange (NYSE) of being in violation of the continued listing standards. According to the rules of the exchange in the listed company manual of the NYSE, it’s clearly stated that listed companies are required to maintain an average closing price of the company’s common stock above $1.00 per share.

Ever since the Swiss National Bank (SNB) took a move to unpeg the franc, sending the currency soaring. FXCM’s shares have been edging downward since the company took a heavy hit, at a certain moment the broker's share price even continually dropped below the $1 per share.

Hence violating the NYSE regulations. Resulting in the issuance of a NYSE notification letter to FXCM with a warning, currently FXCM share price is trading at $0.850 as per Google Finance. 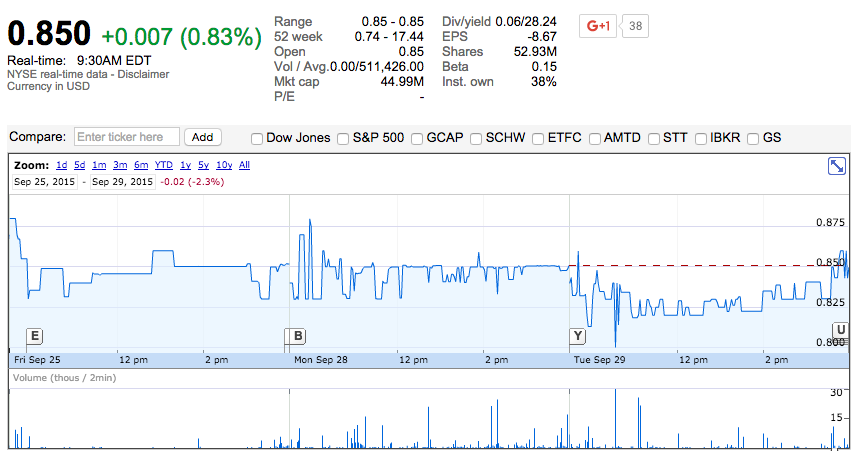 In order to avoid being delisted from the NYSE, the FXCM board already agreed upon a 1-10 reverse FXCM stock split back in July. However, it still had to await the final votes of its shareholders for the implementation. On last week Monday, finally the decision was backed by 93% of the company’s shareholders, in a voting at the annual general meeting.

Having finalised the official announcement, the one-for-ten reverse stock split will now be take effect from Thursday, October 1, 2015. The management has stated that recently: “the Company's common stock will trade on the NYSE on a reverse split-adjusted basis under the same symbol "FXCM," but with a new CUSIP of 302693205. As a result of the reverse stock split, the number of outstanding shares of FXCM's common stock will be reduced from approximately 53,726,664 shares to approximately 5,372,666 shares.”

It has been clarified that no fractional shares were issued in connection with the reverse stock split. Rather, for share holders with fractional share holdings, cash payment will be made at the rate closing sale price per share of the common stock. As of the last trading day preceding the effective date of the reverse stock split multiplied by the number of shares of pre-split common stock.