12 September, AtoZForex.com, Lagos – FXCM Inc (NYSE: FXCM) is undoubtedly one of the major casualties of SNB black Thursday event. Earlier in September 2015, they were notified by the New York stock Exchange (NYSE) that there have been a violation of the continued listing standards.

As many as 3 Stock brokers have rated FXCM Inc. (NYSE:FXCM) at 4.67. Research Analysts at Zacks have ranked the company at 3, suggesting the traders with a rating of hold for the short term. While the other two rated FXCM as strong sell.

Considering that sell was already recommended by one analyst earlier in September. 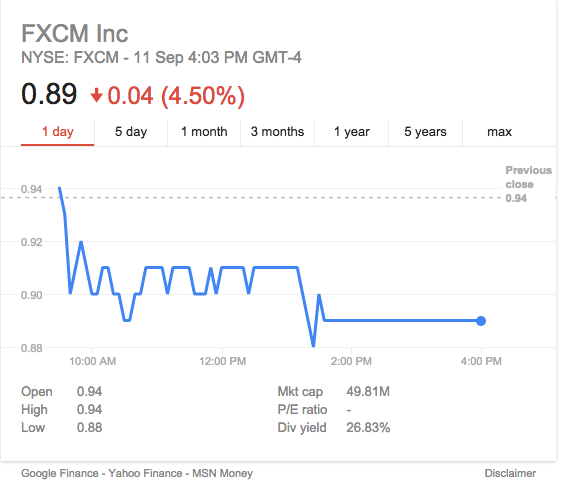 According to the rules of the exchange in the listed company manual of the NYSE, it's clearly stated that listed companies are required to maintain an average closing price of the company's common stock above $1.00 per share. This means that FXCM's share price may be too low for NYSE.

FXCM's shares has been edging downward since the company took a heavy hit on Black Thursday back in January. When the Swiss National Bank (SNB) took a move to unpeg the franc, sending the currency soaring. Ever since, FXCM's share price have continually dropped.

The recent NYSE notification letter indicated that FXCM's share price had dropped lower, slightly below $1.00 per share over a period of 30 consecutive trading days, and the minimum average share price for continued listing on the New York Stock Exchange(NYSE) is $1.00.

Prior to the NYSE FXCM warning, FXCM'S Board of Directors approved a 1-10 reverse stock split back in July. In order to avoid being delisted from the NYSE, which would have brought back the trading value of share as well as fall in line with the New York Stock Exchange standards. However, the move still needs the shareholders approval. Therefore, a vote as to whether to go ahead with the reverse stock split will be held on September 21, 2015.

FXCM has come under intense pressure following losses encountered on the SNB event, as well as losses in the company's value, as its share prices continue to drop. Now, a reverse stock split appears to be the only channel to cure the price condition. According to the NYSE rules, the company has six months following the receipt of the notification, to regain compliance with the minimum share requirement of an average of $1.00 per share.