April 02, 2019. | AtoZ Markets - The Polish police have recently announced on their official website, that they arrested 11 people, against the background of a Forex scam case, amid news of ties and collaboration with scammers in Cyprus.

The statement dated April 1st read also that the police carried out a raid on the offices of the brokers in question the last week, and confiscated properties that included documents, computers and data carriers.

The reports revealed that the 11 detainees served as senior management figures, who took charge of setting up business operations and directing subordinates who were in direct contact with clients.

The fraudulent company, as per the police documentation, claimed up to 2 million zloty ($520,000) in scam from investors, amid news of a success the police made in recovering some of the funds during their raid on the offices.

The scammers lured investors into trading with them by promising them of astronomical returns. 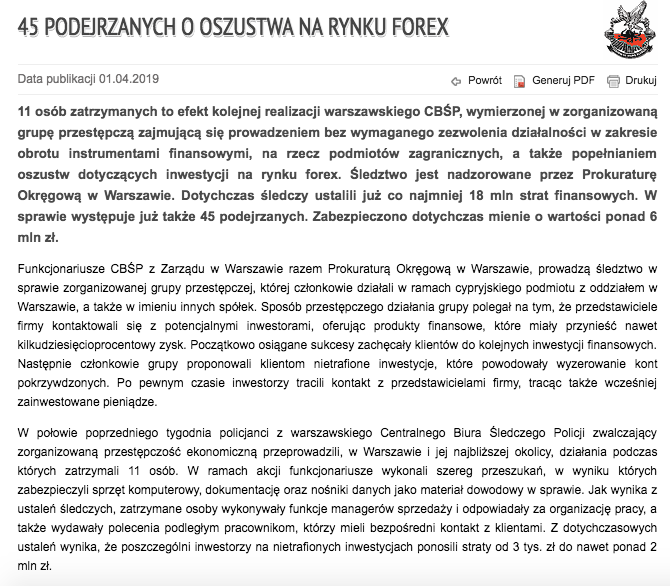 Among the other shocking details of the news is that one of the investors, whose ID was not revealed, asked for withdrawing their funds and stopping pouring any more money in the scheme, however, the scammers cut all ties with them after that.

In retrospect, the Polish police managed last November to stop an operation that was thought to have conned investors out of 18 million zloty ($4.70 million).

In a connected news, AtoZ Market published on April 1st a report on a blockchain scam case in Canada, that was in investigation since 2017.

The news read that the Canadian police froze the assets of the founders of blockchain services company Vanbex, as a precaution in the 2017 Vanbex ICO investigations that are going on for fraud claims.

The court documents dated March 13 read that the company, led by Kevin Hobbs and Lisa Cheng, could raise $30 million CAD (about $22 million) worth of fiat and cryptocurrencies through the sale of a token named FUEL, after promising the investors that value of the token offered will increase within time, the thing that never happened, as per the investigations.