Get VIP Trading Signals Market Watch
Trade Now Your capital is at risk.
The United States Federal Reserve said it is accelerating the tapering of its easy-money policies and now sees at least three interest rate hikes by the end of 2022.

At the end of its two-day meeting on Wednesday, the United States Federal Reserve postponed the deadline for the final curtailment of the asset repurchase program from June to March. The updated forecasts assume three increases in the key rate over the next two years.

The previous forecast for September allowed only one increase in 2022 and two in 2023.

The volume of the reduction in the purchase of bonds was doubled - from $15 billion to $30 billion.

On November 30, Fed Chairman Jerome Powell did not rule out such a scenario during his speech before the Senate.

The reason for the revision of the Fed's position was the strengthening of inflation, which reached its maximum in 30 years in October (6.2% in annual terms).

Fed sees as many as three rate hikes coming in 2022

At its December meeting, the Federal Reserve refused to interpret the increase in inflationary pressures as "temporary." The Open Market Committee raised its inflation forecast - from 4.2% to 5.3% at the end of 2021 and from 2.2% to 2.6% in 2022.

At a press conference, Powell said the rate hike would not occur until the completion of the QE rollback process. He found it difficult to assess the duration of this time lag, but separately noted that the Fed expects to maintain a "consistent" nature of monetary policy normalization. The rate hike could begin before the employment target is met due to rising inflation, he added.

The head of the Federal Reserve drew attention to the risks of the spread of the omicron variant and allowed a slowdown in the rate of tightening of policy in the event of a slowdown in economic growth. Separately, he called the valuation of assets "slightly overstated."

The stock market, gold and reserve currencies in pairs with the dollar at the announcement of the results of the Fed meeting strengthened their positions after some volatility. This happened thanks to Powell's neutral tone and despite the fact that the Fed "surprised" the market with its forecast of three key rate hikes in 2022 against two in the consensus forecast of analysts.

Such a reaction can be explained by the market's doubts that the monetary authorities will be able to implement their plans due to the slowdown in economic growth due to the tightening of policy.

This is evidenced by the behavior of the US government bond market, the slope of the yields of which has become flatter. The inverted character is a leading signal of the onset of a recession in the economy. In particular, the difference between the yields of four-year and two-year bonds became negative. 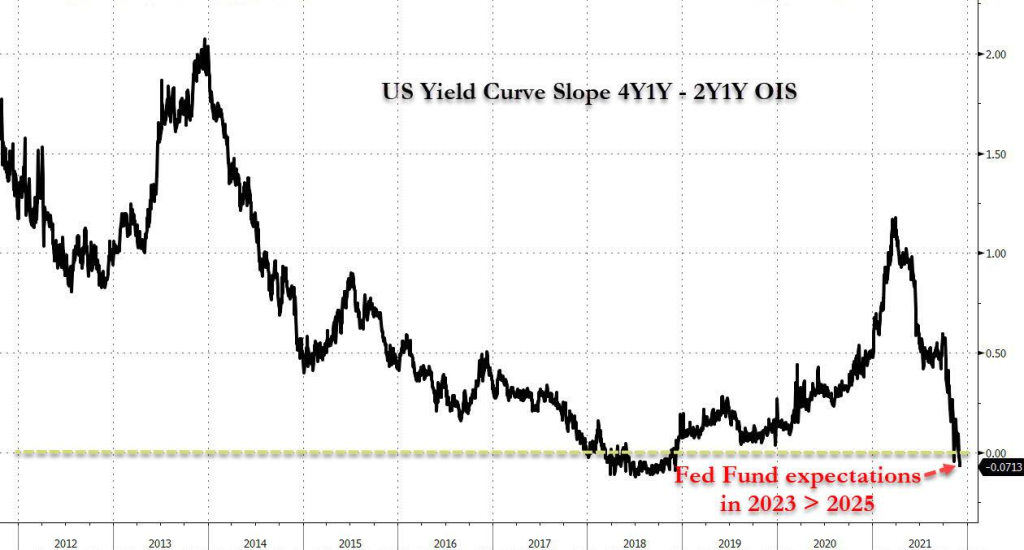 Cryptocurrencies, like other risky assets, reacted positively to the outcome of the Fed meeting, but the recovery was moderate. At the time of writing, Bitcoin has been trading above $49,000, near the midpoint of the $46,000- $51,000 range over the past 11 days. The Ethereum course has won the psychological level of $4000.

In a series of questions and answers on December 15, Powell stated that he sees no threat in cryptocurrencies to financial stability. He called them "speculative assets."

“They are not backed up by anything. There is a big problem with consumers, who may or may not understand what they are getting," - explained the head of the Fed

Powell endorsed the findings of the President's Financial Markets Working Group on "stablecoins," which has called on the US Congress to equate issuers of assets with banks.

“Stablecoins can certainly be a useful and efficient part of the financial system if they are properly regulated. They have the potential to scale, especially if they are linked to one of the very large existing technology networks,” Powell explained.

Recall that in December, the US Senate held hearings on stablecoins. Prior to that, lawmakers requested information from issuers on how stablecoins work.

Earlier, Bank of America called the regulation of stablecoins a catalyst for their mass adoption.