Elon Musk has already had few encounters with crypto, including his latest interview with ARK Invest in February when he called the bitcoin structure (BTC) “pretty brilliant,” saying that digital currency is “a much better way to transfer value than paperwork. This time the South African entrepreneur drew crypto communities attention with his another crypto-related Tweet.

With only one word "Ethereum" on his Twitter, Tesla CEO single-handedly managed to raise another wave of hype around his personality in the entire crypto community. 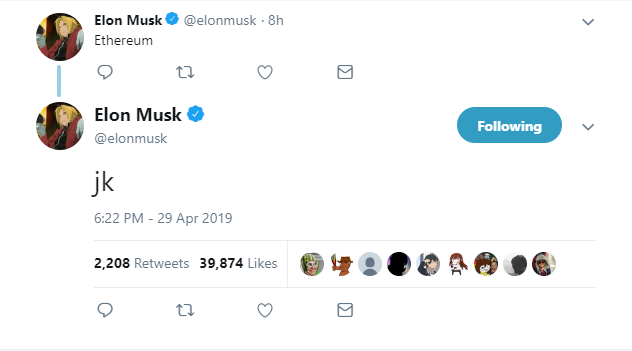 Thereafter, the SpaceX director simply said "Ethereum" the price of ETH began to move, erasing the recessions that put pressure on the second largest cryptocurrency all day. At the moment the price is fluctuating between fractional gains and losses.

Moreover, EthHub developer Anthony Sassano pointed out that Ethereum took off on Google Trends as well. It happened in the moments after Musk tweeted “Ethereum.”

Although Musk followed his “Ethereum” tweet with “jk” (“just kidding”), he could not stop responses from the users ranging from cheers to reminders that he’s on the SEC’s radar.

It is worth noting, that Elon Musk crypto tweet drew the attention of the user under nickname Hodlonaut.

This person became widely known after his battle of words with notoriously famous Craig Wright. However, one of the most eye-catching responses to the Elon Muck crypto tweet came from Vitalik Buterin.

The Ethereum co-founder, also known in Tweeter as “Vitalik Non-giver of Ether” invited Musk to an upcoming conference, Devcon.

Elon Musk and the crypto relationship has a long history

Elon Musk has had more interaction with crypto than he could have imagined. The SpaceX CEO made the first public comments about Bitcoin in 2014 during one of his interviews with Walter Isaacson on stage at Vanity Fair's New Establishment Summit.

In January 2018, Musk decided to promote a flamethrower released by his tunnel construction firm,  by saying: “The flamethrower is sentient, its safe word is ‘cryptocurrency’ and it comes with a free blockchain.”

In March 2018 he was spotted holding a book called “Cryptocurrency simply explained.”

In February 2019 Elon said in one of his latest radio interviews “it would be wrong to use Tesla resources to participate in cryptography.

Obviously, this is not the first time Tesla CEO has caused hype around crypto through his tweets. He recently said hello to Dogecoin.

Inspiring to change the price of Ethereum, even for a while, Musk showed how much he loved and how influential he was among crypto enthusiasts. If he decided to release a Tesla or a SpaceX coin, the demand would probably be huge.

For someone who is avoided by most of Wall Street, a warm welcome from crypto protection should be a welcome sight. Otherwise, it seems like, the tech billionaire does not have intentions to push the community.