Get VIP Trading Signals Market Watch
Trade Now Your capital is at risk.
Is Ethereum better than Bitcoin? JP Morgan analysts think it could be as the price of the world's second most valuable cryptocurrency has risen by more than 500% in 2021.

In the foreseeable future, Ethereum will become a better choice for investors than Bitcoin, analysts at JPMorgan Chase predict.

Since the beginning of the year, the ether rate has risen by 500%, while the Bitcoin rate has risen by 96%. As a result, the capitalization of the second largest cryptocurrency is now half of the first, and current trends in the global economy indicate that this trend will continue, bank analysts say. 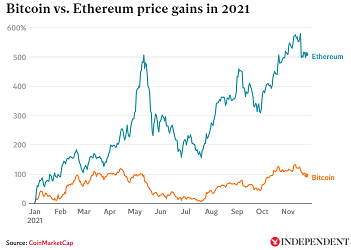 Growth of Ethereum and Bitcoin as a percentage since the beginning of 2021. Image: The Independent, CoinMarketCap

The authors note that Ethereum is already playing a leading role in emerging industries such as decentralized finance and non-fungible tokens. Bitcoin is used as a means of payment, as in El Salvador, or a store of value, similar to gold.

“The rise in bond yields and the subsequent normalization of monetary policy are putting downward pressure on bitcoin as a form of digital gold. Similarly, higher real yields are weighing on traditional gold, the bank said in a new report. - Ethereum derives value from its applications, which range from DeFi to games, NFTs, and stablecoins. ETH seems to be less affected by real profitability growth than Bitcoin. "

A recent poll by the uk.investing.com portal showed that 52% of investors plan to purchase ether by the end of 2021, while 48% intend to invest in bitcoin.

“Many crypto investors have shown higher expectations for Ether over the past year thanks to the rise of DeFi projects and NFTs,” writes Jessie Cohen, senior analyst at uk.investing.com. - ETH price remains below $5,000 and many expect it to double in 2022. At the same time, bitcoin is showing no signs of slowing down, and its mass adoption is likely to continue to gain momentum over the next year. "

Ethereum surpassed JPMorgan Chase in capitalization for the first time last month and is now the 15th largest asset in the world at more than half a trillion dollars, which is $10 billion more than the bank's own capitalization.

Recall that a JP Morgan concluded in a September report that institutional investors are showing a "strong preference for Ethereum over Bitcoin." This is the conclusion made by their analysts is based on a comparison of the price of futures of the respective cryptocurrencies with their spot markets.

This is not the first time that analysts at a major bank have expressed such a point of view. In May, Goldman Sachs released a paper on cryptocurrencies, describing bitcoin as a little power and wasting tool while extolling ether as the future "Amazon of information."