BofA Merrill Lynch S&P 500 forecast following the election, as it became recent major Wall Street firm to raise its near-term targets. What to expect from S&P 500 by the end of this year?

23 November, AtoZForex – Bank of America Merrill Lynch on Tuesday became the latest major Wall Street firm. It hiked its near-term forecast for the S&P 500 after the election.

The bank increased its year-end target for the index to 2,100 from 2,000. The market has sailed through some of this year’s biggest shocks like the UK EU referendum the US presidential election. While 2,100 is about 4.8 percent below Tuesday’s record close for the S&P 500. The BofA ML’s target hike follows similar moves by other strategists.

Last Friday, Deutsche Bank strategist David Bianco hiked his year-end target to 2,200 from 2,150. The S&P 500 is likely to reach 2,250 by the inauguration. The market is likely underappreciating a potential major increase in earnings per share from lower taxes, hiked bank profits from rising yields and a much higher chance of a longer economic expansion. 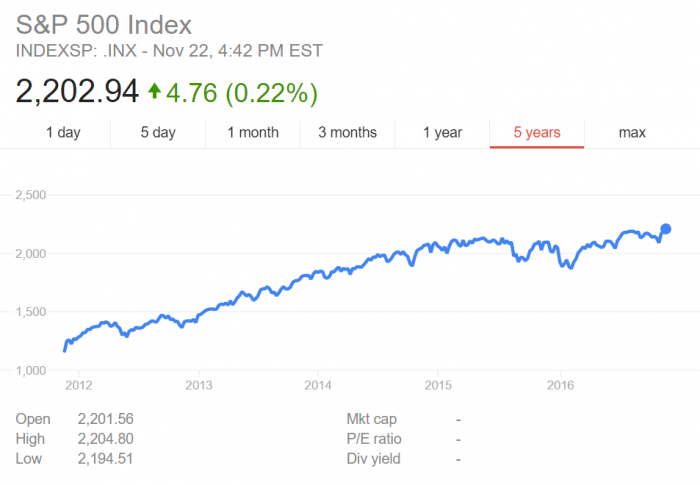 On Nov. 10, two days after the election, JPMorgan’s head of US equity strategy Dubravko Lakos-Bujas published a note raising its near-term outlook on the S&P 500 to 2,300.Lakos-Bujas said in the note:

Preceding to the election, he had a year-end target of 2,100 for the S&P 500. The three major US indices gained to all-time highs for a second-straight day on Tuesday. The S&P 500 closed at 2,202.94, climbing nearly 3 percent since Election Day, with financials up 11.2 percent over that time.