February 5, 2019, | AtoZ Markets - According to the latest news from the cryptocurrencies capitalization tracking website, the price of a BitTorrent token (BTT) has risen by more than 600 percent since its ICO, which was sold out in minutes.

What is known about BitTorrent

As the company website states, BitTorrent Inc. is an internet technology company with the headquarters in San Francisco. It designs distributed technologies that keep creators and consumers in control of their content and data. BitTorrent is a communication protocol for peer-to-peer file sharing which is one of the most common protocols for transferring large files, such as digital video files containing TV shows or video clips or digital audio files containing songs. In early January this year, the company launched its own BTT token based on Tron TRC-10 token. According to the BitTorrent officials, the token will be used on the platform to “transact in computing resources shared between BitTorrent clients and any other participating service headquarters and service providers.”

The Internet Company has big ambitions

BTT is possibly could be a part of a wider ambition to create a decentralized content distribution platform using digital currency. On January 28, BTT sales on the Binance Launchpad platform appeared in the headlines, earning $ 7.1 million when selling 50 billion tokens in less than 15 minutes. Tron CEO and founder Justin Sun officially announced that all 23.76 billion BTTs were sold in 13 minutes and 25 seconds at a cost of $ 0.00012 per token. 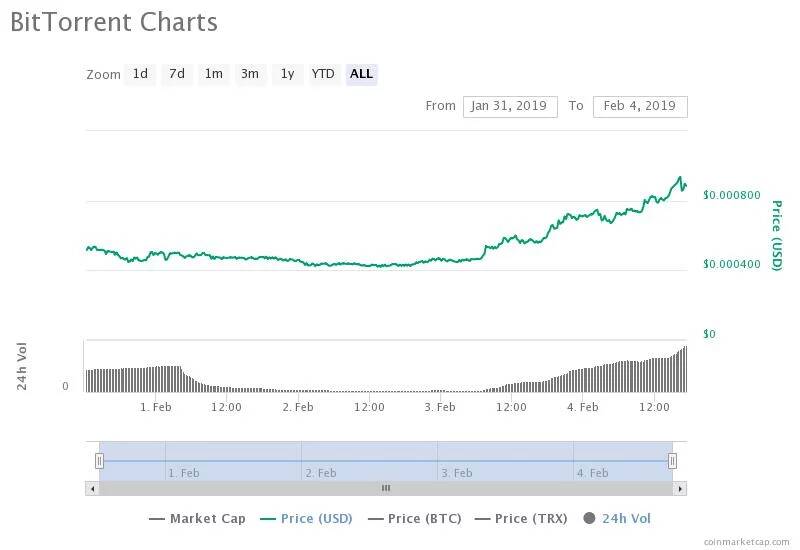 As the press reports, BTT has been trading at about $ 0.000885, which is 629 percent more than the price since ICO, and 47 percent in the last 24 hours. The volume of trade in coins on the last day was about $ 360 million, and the total supply - 990 billion BTT. Over the same period, the leading digital currency on market capitalization Bitcoin (BTC) lost about three percent, the second largest coin Ripple (XRP) added about 3.4%, and Ethereum (ETH) rose by about 2.8%, according to the latest cryptocurrency values reports.