Tech entrepreneur and popular Crypto enthusiast John McAfee has something to tell the world - he knows the identity of Bitcoin creator Satoshi Nakamoto.

April 19, 2019, AtoZ Markets - Perhaps the biggest mystery of the cryptocurrency world is the identity of Bitcoin creator. The cryptocurrency was created over ten years ago and over 2000 other digital assets have been created after it. However, the identity of the creator has been anonymous and this has created an opportunity for many imposters who claim to have written the whitepaper of the flagship cryptocurrency. Satoshi, of course, didn't work alone on the groundbreaking project. Because Satoshi's identity is not known, some of the early Bitcoin developers like David Kleiman and Craig Wright have been referred to as likely Satoshis. However, there is still no good evidence that any of these men is Satoshi although it was proven that they helped get it off the ground.

However, it now seems one of the best-kept secrets the tech world has ever seen will be revealed once and for all. John McAfee has claimed to know the real Satoshi and is determined to reveal him. Does Mr McAfee know Satoshi really? There was so much certainty in his statements but until it is proven, there is no evidence yet that he has any relationship with Satoshi. 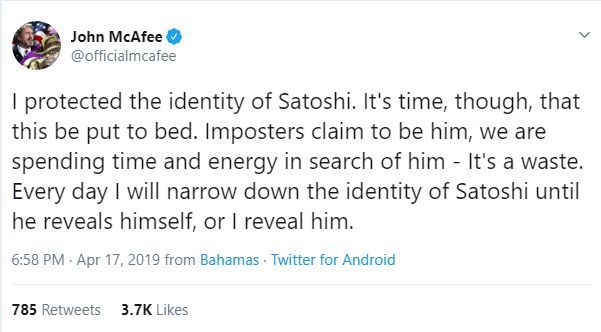 It will be fascinating if the identity is revealed and the community knows the father of cryptocurrencies. However, this could lead to yet another conspiracy theory to drive in speculations and heightens uncertainties. The crypto world has accepted Satoshi will not be known but this news, if taken seriously, could change the narratives. We are talking about one of the most successful projects of any fields in the last decade with no one taking credits for its creation.

Why is Satoshi anonymous?

Why would he hide his identity in the first place?. Here are some conspiracy theories.

1. He didn't know the project would be this successful.

2. He wanted to protect the users and investors from the prying eyes of the government. The creator of a new money system that could derail the government controlled money order would be the most wanted man on earth.

3. He wanted his privacy and thought of his security above all else.

4. Satoshi is just a name to diguise and take attention away from the real creator(s) who are probably well-known figures. What if Bill Gates is Satoshi?

5. Tax evasion: Satoshi is one of the richest men on earth now. Probably he wanted to evade huge taxes and will be jailed if his identity is known now.

These are some of the most common conspiracy theories which are reasonable enough. The question is this: why would he want his identity to be revealed now?

Whether McAfee has a good information on the identity of Satoshi remains to be seen. However if he doesn't, he's certainly up to something which will lead to another round of conspiracy theories. All we can say for now is this - let the countdown begin.