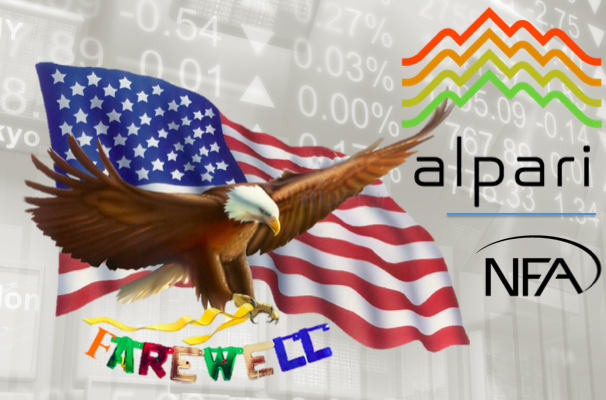 It has been about "one and a half year", since Alpari`s exit from the United States. Since that drastic withdrawal of the vast market, the company has retracted its operations in several areas. However, it wasn't until now that Alpari has officially submitted its application to the National Futures Association for terminating its membership. This act by Alpari makes it crystal clear the intent of the firm to refrain itself from the North American market. Basically, Alpari finally bids America farewell!

The information published on the National Futures Association website displays that four entities, that are currently registered with the United States regulator, have become the subject of Alpari`s decision to cancel its membership. Specifically, these are the following; Alpari FX pro, Alpari FX and Alpari Academy. The latter is the firm's FX educational services wing and it was registered as an introducing broker with the NFA.

Another Interesting sequence of development is that former Alpari`s United States CEO, Mr. Daniel Skowronski moved to London "in and about" last year. The motive behind this act was for him to head Alpari`s global operations at the "Non'-Russia business. However, this was not of very long nature, since Mr, Daniel Skowronski had to leave unexpectedly the UK firm, after a brief period operating. At that time, being replaced by the former CMO/COO David Hodge, his resignation was not based at performance at all, since his input was essential for Alpari UK.

Despite all the mystery and lack of transparency, Alpari did achieve a remarkable achievement just recently. As yesterday it was reported that Alpari meet their new milestone: since the firm has topped the life time achievement of one million open accounts, which is an outstanding realization. These number of accounts are distributed under the Russian outlet on www.alpari.ru and on www.alpari-forex.com. Evidently, the number of open accounts at the now non-existent Alpari US and UK branches, were excluded.