Ripple's XRP is recovering after several weeks of a crash. On Thursday, the token managed to grow by almost 6%, despite the sale of Bitcoin.

January 22, 2021 | AtoZ Markets – For the cryptocurrency fintech startup Ripple (XRP), 2021 did not start well. The coin not only fell sharply but also dropped to fifth place in the ranking of digital assets by market capitalization.

However, XRP backers finally have hope of recovery as US President Joe Biden has nominated Michael Barr for the post of head of the Office of the Currency Controller (OCC).

Barr, a former U.S. Treasury official, was previously an advisor to Ripple. Moreover, he is known as a person who understands how cryptocurrencies work. In 2016, he wrote an article on Bitcoin, in which he described how banking services can be made more accessible to the general public.

Does bitcoin have a future in development? https://t.co/BoHYDlbiLc

Not surprisingly, in the context of Ripple's recent problems with the Securities and Exchange Commission (SEC), his appointment was seen as good news.

What's next for Ripple?

Ripple Labs Inc. seeks to get away from the unwanted and unfavorable context that has haunted her in recent months. The last entry in the company's official blog said that over the past 12 months, she was able to greatly strengthen its position in the industry, but the strict regulations in the US and on a global level remains a key issue.

According to Ripple's legal counsel, Stuart Alderoti, regulation of the cryptocurrency industry will be a priority for the Biden administration.

“Thoughtful and competent regulation, properly voiced and implemented will help level the playing field, will promote innovation and the massive distribution of cryptocurrencies in the United States,” he said.

All the signs of recovery are evident. XRP rate in relation to bitcoin has been growing for the fourth day in a row. The coin bottomed three weeks ago and has since gained nearly 39%.

XRP has great potential for further growth, which will be realized if the company is able to competently resolve its problems with the SEC. Overall, the coin is entering a consolidation phase after a wave of sales. 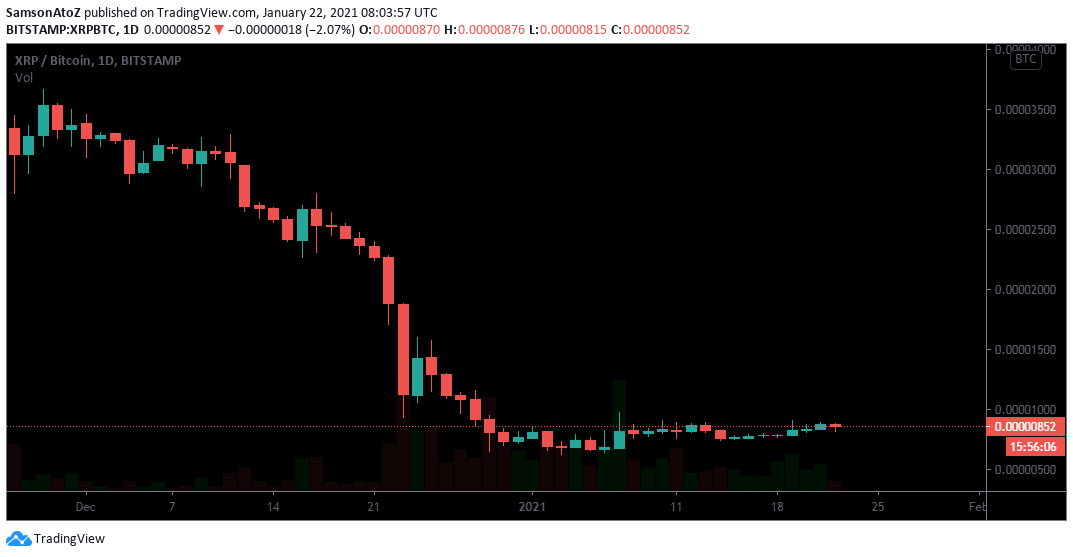 Will the Biden administration bring good news for Ripple Labs? The company needs regulatory clarity more than ever.