Cryptocurrency markets maintain positive pricing as of the beginning of the week. Leading altcoin Ethereum is showing a weekly gain of over 19%. The proportional increase in the value of ETH has almost doubled the leading cryptocurrency Bitcoin.

The leading altcoin is currently trading near $3,000, which is a key resistance level. In parallel with the positive price increase seen in ETH, comparisons with Bitcoin gained momentum again. Experts are debating when will Ethereum overtake Bitcoin in terms of market capitalization.

Difference between Ethereum and Bitcoin

There are several factors to choose one cryptocurrency over another. For example, the supply of Bitcoin is limited, which increases the demand for BTC. Ethereum stands out in terms of functionality. In particular, it is thought that smart contracts will increase the value of ETH even more in the future.

Currently, Ethereum has a market cap of $347.3 billion. Bitcoin, on the other hand, has a value of $779.3 billion. The probability of Ethereum's market cap exceeding Bitcoin's is considered highly probable by experts. Dr. Kosrow Dehnad and Joe Duncan are best known for their work on this possibility. Dehnad and Duncan base their research on the price performance of ETH and the protocols on Ethereum.

“In the case of Bitcoin, because its supply is limited, some of its value is similar to antiques and works of art. At the same time, Bitcoin can also act as a hedge against inflation. But Bitcoin's blockchain, which handles about seven transactions per second, is severely disadvantaged compared to fiat processors (Visa). As a result, in the current state of the technology, Bitcoin is too slow to be a real medium of exchange. The main attraction of BTC as an asset is its scarcity (supply constraint).”

Dr.Dehnad and Duncan underline that Ethereum has much more technological features compared to BTC. Experts report that NFT transactions over the Ethereum network are an indicator of this situation:

“Smart contracts are not supported, given the fact that Bitcoin is not scripted programming. These innovations in the Ethereum blockchain increase the demand for ETH. For example, a work by artist Mike Winkelmann (Beeple) sold for $69 million on the ETH network.(NFT is an example of this.  The combined annual return in the art and collectibles market is approximately $436 billion, according to Market Decipher and Statistica. This could increase the market value of ETH by about 12.5%.”

Dehnad and Duncan use the frequency of updates and average prices to predict when Ethereum's market cap will catch up with Bitcoin. Experts report that the leading cryptocurrency will be Ethereum very soon by creating their own charts:

“The x and y axis in the chart below are the frequency with which new updates arrive and their percentage impact on BTC value. The Z-axis is an estimate of the time it will take for Ethereum to catch up with Bitcoin. In an optimistic scenario where updates come with a 20% impact on the value of Ethereum each year, we predict that Ethereum will catch up with Bitcoin in a little less than five years. On the other hand, if major updates happen at a slower pace about every three years, it will take about nine years for Ethereum to catch up  with BTC's market value.” 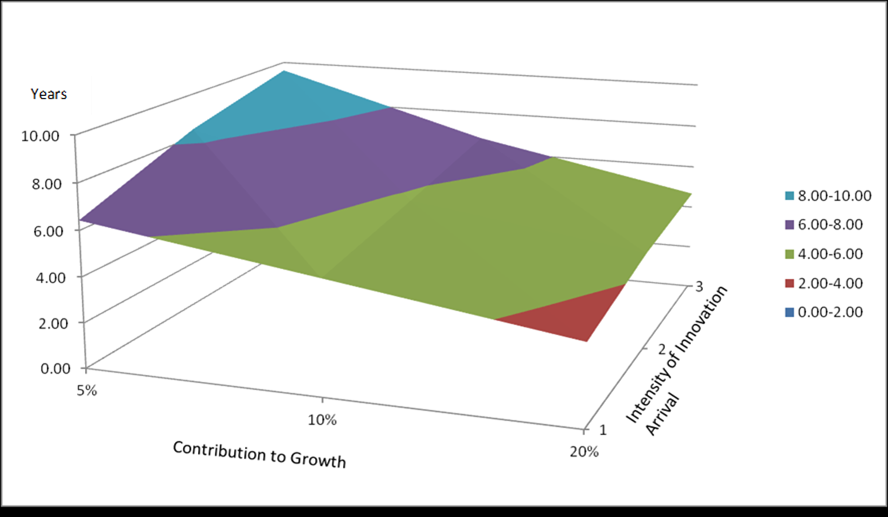 The Probability of Ethereum to Exceed Bitcoin's Market Cap, Based on the Frequency and Size of Innovations.