Security Token Offering (STO) is frequently called the future of token evolution but what factors can lead to STO mass adoption in the coming days, let’s find out.

August 27, 2019 | AtoZ Markets -  STO stands for Security Token Offering which has a similar process of an ICO (Initial Coin Offering) where an investor exchanges money for coins or tokens as investments. STO’s are fungible, negotiable financial instruments with money value which is quite like the shares we trade in stock exchanges.

STO’s usually distributes tokens that reside under the status of securities that can only be bought from regular token exchanges. Rather than being linked with coins or specific projects, STO’s are linked with Stocks, Bonds, Real Estate Investments Trusts or other kinds of funds.

The first STO was launched by Blockchain Capital (BCAP) on April 10, 2017 which raised 10 million of funds in a single day. After that in September 2017, Science Blockchain (SCI) completed the second security token sale. In 2018, several companies like Spice VC, Quadrant Biosciences, Open Finance Network, Aspen Coin and The Hub at Columbia sold several ownerships of the STO’s.

In 2019, after Sharepost’s ATS custody, tZERO opened a dedicated securities token exchange. The overall journey STO since 2017 are showed below graphically. 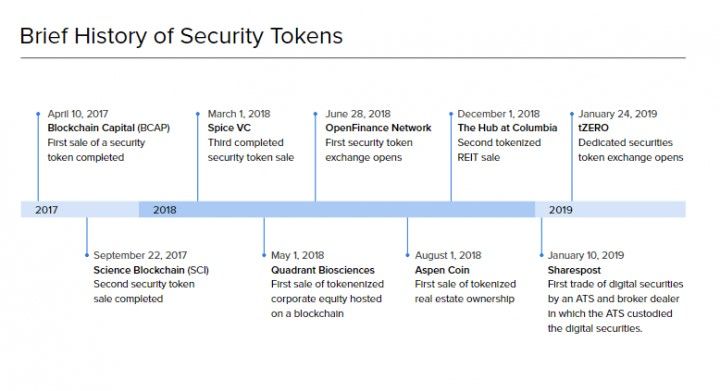 What is the difference between STO and ICO?

STOs and ICOs are having significant differences pulled the things apart despite having the same technology running behind. After the ICO bubble of 2017 bursting in 2018, which resulted in the demolition of thousands of ICOs and losing millions of dollars, currently having proper information of good-rated ICOs and STOs to avoid such calamity is invaluable.

Why STO mass adoption can be the next big thing?

As STO solves the problems and loopholes in the ICO process and provides better and safer investments for the investors and traders, we can hope for the fast adoption of STO in the future. Though there are certain obstacles and legal procedures of obtaining an STO as Retail Investors cannot easily get access to STO as like ICO but considering the security and reliability side, STO is superior option to get massive adaption in the coming days.