Get VIP Trading Signals Market Watch
Trade Now Your capital is at risk.
Politicians in Nigeria look positive at cryptos, and Ripple jumps high in Q2. Know the latest unlicensed bitcoin exchange detected in the U.S., and why was Roger Ver denied a visa to Australia?
Welcome to the AtoZ weekly crypto overview.

27 July, 2019 | AtoZ Markets - Before taking off, I have a chatter about AFX Capital Markets, which I would like to start with. The Cyprus Securities and Exchange Commission (CySEC) was said this week to have suspended the licence of the forex firm AFX Capital Markets LTD.

The regulator notes that the decision came “under section 71(6)(c) of Τhe Investment Services and Activities and Regulated Markets Law of 2017 (‘ the Law’) and section 10(1) of Directive DI87-05 for The Withdrawal and Suspension of Authorization (‘DI87-05’). There are suspicions of an alleged violation of section 22(1) of the Law. It is due to the company’s possible non-compliance at all times with the authorization condition in section 17(9) (organizational requirements) of the Law. It specified in paragraphs 4, 6 and 9 of Directive DI87-01, regarding the safeguard of clients’ funds,” published on CySEC’s website.

Nigeria Is Smiling at Cryptos Nowadays!

I am telling you this because what I had had mid this week was that the spokesperson of the Nigerian House of Representatives, Femi Gbajabiamila, called for adopting a legal framework for regulating cryptocurrencies.

Gbajabiamila requested On 23 July that his government starts formulating regulatory guide for digital assets, to benefit from this new digital currency that is being more adopted today, saying:

Yes, they now share that publicly and the news is no longer a mere rumor! What I learned was that database issues at the Swedish digital currency exchange QuickBit resulted in a breach of sensitive user data.

Up until the exchange’s announcement, what has affected the exposure at the time were names, addresses, email addresses and card information that accounted for 2% of the total number of clientele on the exchange. However, the bright side here says that customers’ more sensitive data. Such as passwords or social security numbers, complete account or credit card information, cryptocurrency or private keys, or financial transactions were all still protected and not revealed.

Not for the first time

Roger Ver Denied an Entry Visa to a Foreign Country!

After the U.S. did once, Australia denies Roger Ver tourist visa to attend the Bitcoin Cash City conference. It scheduled to take place in the country soon.

Ver tweeted that concerns of him staying in Australia stood behind the negative decision for his tourist visa application to Australia. The country’s embassy in Japan explained in its answer.

Roger whispered that here, therefore, would not be able to attend the conference. He is forwarding the blame to the “embassy workers @AustralianJPN” per his description. 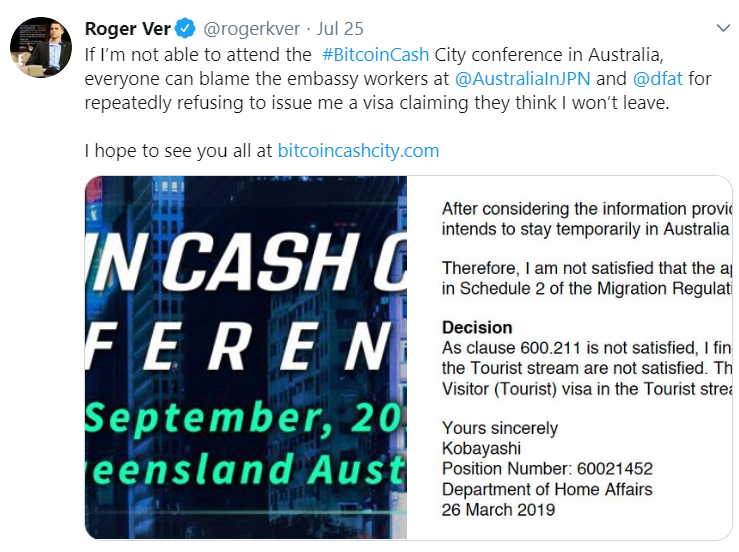 Fine on An Owner of An Unlicensed Bitcoin-To-Fiat Exchange in the U.S.

U.S. Department of Justice has caught a bitcoin exchange that had also been operating without a licence.

William Green has been charged for operating an unlicensed money transfer business. He was $250,000 fine, in addition to the probability of imprisoned five years, as the charge legally carries.

Away from news, we also published mid this week an analysis under the title “what scares the world of cryptocurrencies?”
In the article, I detailed many points at which global concerns intersect. In addition to the foundation of cryptocurrencies, their mechanism, and where they are today.

Ripple Sales Increase By 48% and It's Institutional Buys Spike Too

The second quarter of 2019, Ripple has also unveiled that the currency’s sales have increased in the quarter to 48% from where they were in Q1.

Furthermore, the company says its institutional customers also increased. It is amid news of a new policy the company intends to follow soon. It intends to pull back from certain exchange markets in pursuits to target. Liquidity is most needed there. Their business pace recently may negatively impact direct institutional sales.

The crypto hailed much at the beginning of Q2, in synchronization with NASDAQ adding Ripple XRP index after listing BTC and ETH.