The initial step with Bitcoin is choosing a secure Bitcoin wallet as it is used to gain access to your Bitcoins. Here are the Top 10 Bitcoin Wallets 2017

AtoZForex – The Bitcoin wallets contains the private and public address, which is used to gain access to your Bitcoins. There are different types of Bitcoin wallets in the market so choosing among them is quite difficult. These wallets help you to go to destination to the store, receive and send Bitcoins.

Before I tell you about the Top 10 Bitcoin wallets 2017, here are the key things you should consider before choosing a bitcoin wallet. You should always look for these six things in the Bitcoin wallet- Company Reputation, Open Source/Security, Privacy, MultiSig account, Backup features and the Web Platform Availability

Mycelium is a semi-open-source Bitcoin wallet. Its code is open to everyone for review, but you cannot modify or redistribute it. It does not support multisig accounts. Mycelium wallet also doubles as a local trading platform to assist you in exchanging/trading Bitcoins locally. Mycelium wallet is available on Android and iOS only for now.

Copay is a true bitcoin wallet, not an account service. Secure your personal funds with multiple signatures, or just one. It supports the full Bitcoin Payment Protocol which is highly secure. Now Copay is available in ios stores, Google Play and Windows Store.

Armory is the most secure and full-featured solution available for users and institutions to generate and store Bitcoin private keys. This means users never have to trust the Armory team and can use it with the Glacier Protocol.

The Breadwallet is a stand-alone client, which connects you directly to the Bitcoin network. Your Bitcoins remain safe, as there are no additional servers to get hacked or go down. The open source feature of Breadwallet allows anybody to review the code and verify the security model of the wallet. Breadwallet is available in Android and iOS stores.

Electrum is an extremely fast and lightweight Bitcoin wallet. It uses minimal computing resources, so it is a perfect match for older hardware. Electrum proves that being less resource-intensive doesn’t mean having to cut down on features. 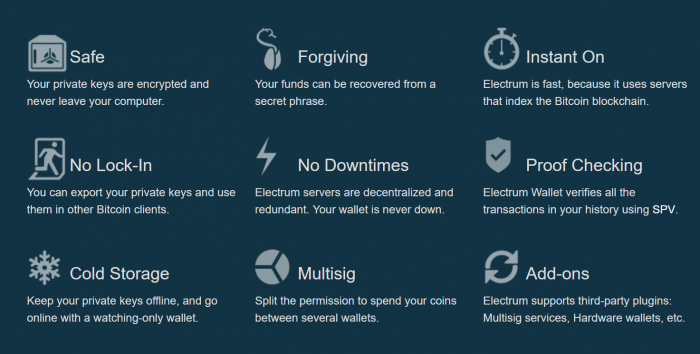 MultiBit HD is the brainchild of KeepKey, a company that manufactures a hardware Bitcoin wallet by the same name. It is a lightweight desktop client which, like Breadwallet, connects directly to the Bitcoin network. This open-source client allows you to backup your wallets using a passphrase, so you can restore your private keys using the backup phrase.

AirBitz is a mobile-focused Bitcoin wallet client that is often touted as highly secure. In addition to being open-source, it covers all the basic features like back-ups and client-side encryption. It also has an integrated way to buy/sell Bitcoins and it has a Bitcoin business directory, which lists the merchants which accept Bitcoin.

Blockchain.info is famous for their Blockchain explorer service, but it also offers a wallet service. But, you can connect to the TOR network for added anonymity.

Trezor was one of the earliest pioneers of the hardware wallets. SatoshiLabs, a Europian start-up, is the brainchild behind the Trezor wallet. Moreover,  it connects to your computer via USB and features an OLED display.

Coinbase is one of the most popular Bitcoin exchange services used globally. They also provide a mobile and a web wallet. Coinbase gives you a little more flexibility than Bitcoin.info, as it allows users to manage their own private keys. It also supports multisig wallets wherein, up to 5 users can own a shared wallet.

What do you think about these Bitcoin Wallets? Let us know in the comments section below.