Spanish financial authority has stepped up to warn investors about the activity of unauthorized Forex websites. While Spanish Regulator CNMV Warning Forex Websites, we look into the insights of the case.

23 November, AtoZForex – The key financial regulator of Spain, the National Securities Market Commission (CNMV), has published a new announcement on its website. The regulator has issued a warning against two websites that appear to be operating without a license.

The CNMV has issued a warning for investors against two .cat websites, namely forex.cat and forextrading.cat. The latter website leads to the website of the offshore Forex broker operating under the name LiteForex, liteforex.es. The website is in the Spanish language, as the company also claims to have an office in the Marshall Islands.

Yet, the relation between the forextrading.cat. and LiteForex brokerage is still unclear.

We have reached out to the company representatives for the additional insights into the case and are currently awaiting the response. Below, see the screenshot of the CNMV’s official announcement (in Spanish): 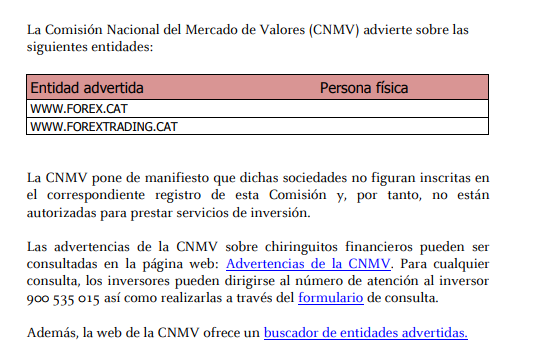 The Spanish supervisor states that these websites and companies do not hold any license to onboard retail clients.

As we approach the end of 2017, Forex brokers find themselves in the midst of their preparations for the MiFID II. To streamline this process, the European regulators, led by the key EU regulator, ESMA,  have been actively directing the market to take the necessary steps on time. TIn fact,  being non-compliant with MiFID II will result in hefty fines.

Back in May 2017, the Cypriot regulator, the Cyprus Securities and Exchange Commission, has already issued the C210 circular. There, the regulator clarified on the new broker’s requirements for the CNMV to solicit for Spanish traders. At the time, the Spanish regulator urged all CIFs to include warnings of trading leverage products. The official circular has stated:

“In particular, the CNMV requires firms to expressly warn retail investors resided in Spain about the risk and complexity of trading CFDs, rolling-spot FX with a leverage greater than 10:1, and Binary Options.

The CNMV considers that these warnings, which include a handwritten statement made by the client are needed to ensure that all Spanish investors have the same level of protection.”