In its statement, released on Tuesday, FSCA confirmed that 33 years old Durban-born South African Forex trader Ngcobo and his partner Mzabalazo Dlamini have been found guilty of several counts of frauds.

According to the local media, Ngcobo has been arrested for allegedly defrauding an Angolan national, Francis Boole, in Sandton for a whopping 100 000 South African Rand (R) and the case was opened in Sandton, Johannesburg. Boole appealed to Sandton police station last May, indicating a fraud charge against Ngcobo.

The court has sentenced Dlamini and Ngcobo to six years imprisonment, two of which were suspended, and a fine of 200 000R which is equivalent to £10,600 or so British pounds or almost $14,000 US dollars. The fine has been suspended for five years.

According to FSCA press release, Dlamini and Ngcobo had misrepresented themselves as authorized financial services providers that have relevant authorizations to make foreign exchange trading deals for their clients. However, they did not. Ngcobo denied any allegations.

In a statement made after the successful conviction, the South African authority stated in the official letter: “The FSCA welcomes the sentence imposed on them, as it sends a clear message against unscrupulous financial entities and scams. Their conviction is also an example of the cooperation that exists between regulators and law enforcement agencies.” 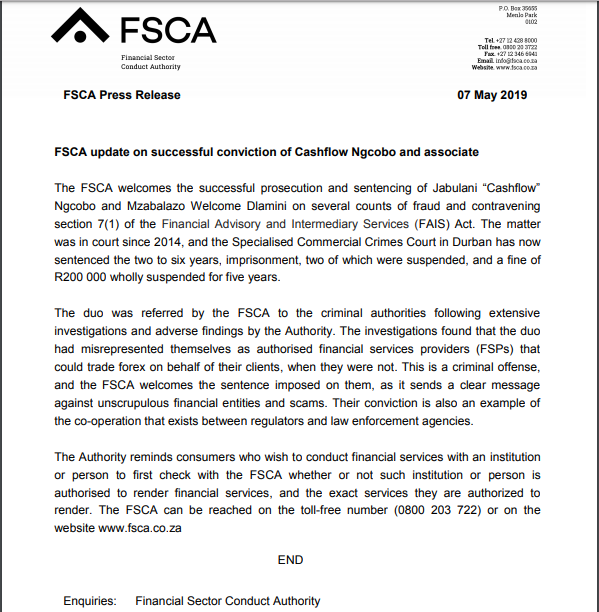