Get VIP Trading Signals Market Watch
Trade Now Your capital is at risk.
Crypto investors have resumed the withdrawal of bitcoins from exchanges, while the US stock market continues to climb to new highs.

Participants in the cryptocurrency market have resumed the active accumulation of bitcoins from exchanges, a sign they expect the price to rise. This is evidenced by data from Glassnode.

The #Bitcoin market hovers precariously below $50k, as the bulls, and bears draw their lines in the sand.

After a significant deleveraging in derivatives markets, onchain data provides insight into the most likely $BTC move.

Read more in The Week Onchainhttps://t.co/1hRY4Swkoz

At the end of the last week, the seven-day moving average of the inflow/outflow of coins to centralized platforms became negative and ranged from 2113 BTC to 5831 BTC. The last time similar values ​​were observed was at the beginning of August. 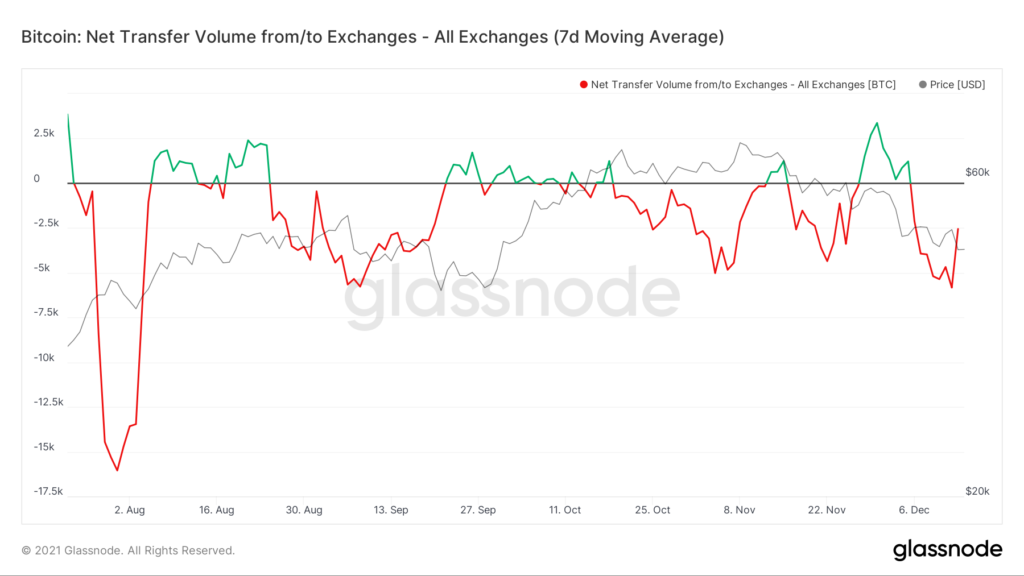 As part of the current correction in October-December, exchange balances decreased by 49,000 BTC. This contrasts with the previous episode in May-July when there was an influx of 168K BTC coins. 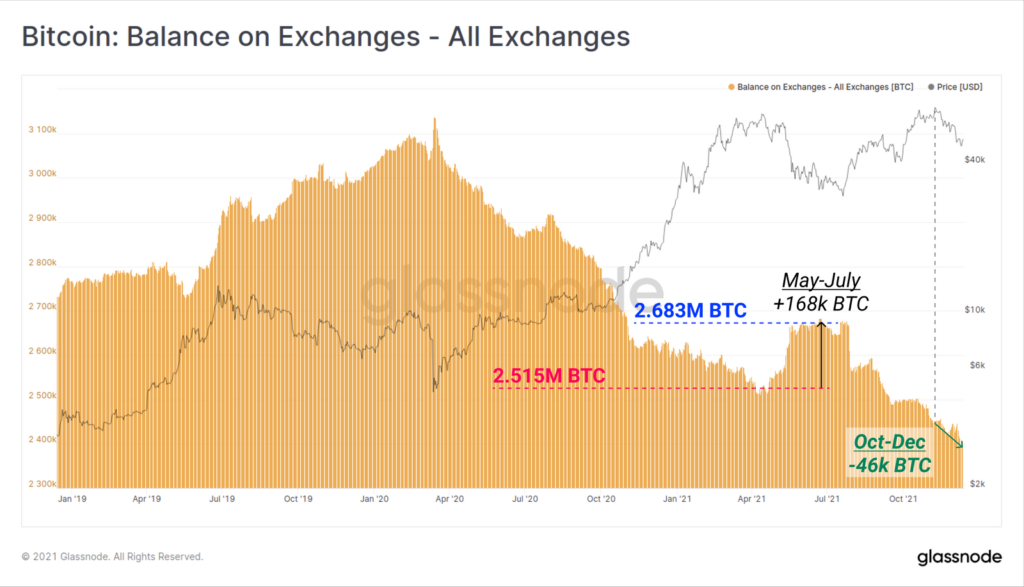 The realized losses graph reflects two capitulations of investors in the amount of more than $1 billion per day during the current correction. Compared to the events in May-July 2021, the process has accelerated.

Investors typically take direct custody of coins when anticipating a price rise. A continued exodus of cryptocurrency from exchanges implies less selling pressure in the market and scope for a sharp rally. 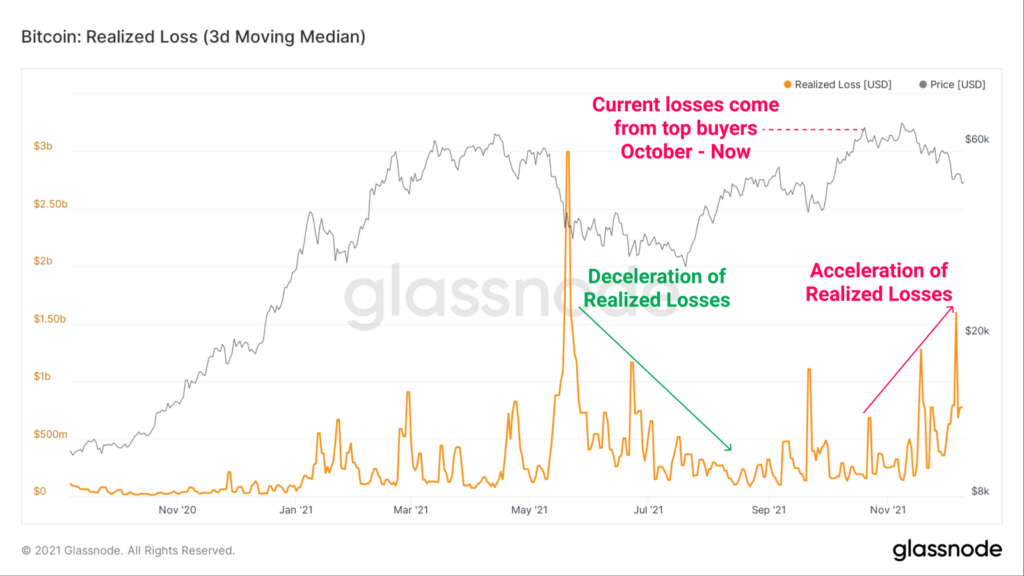 The dynamics of the realized profit indicate a decrease in the interest of hodlers in spending at the prevailing levels. 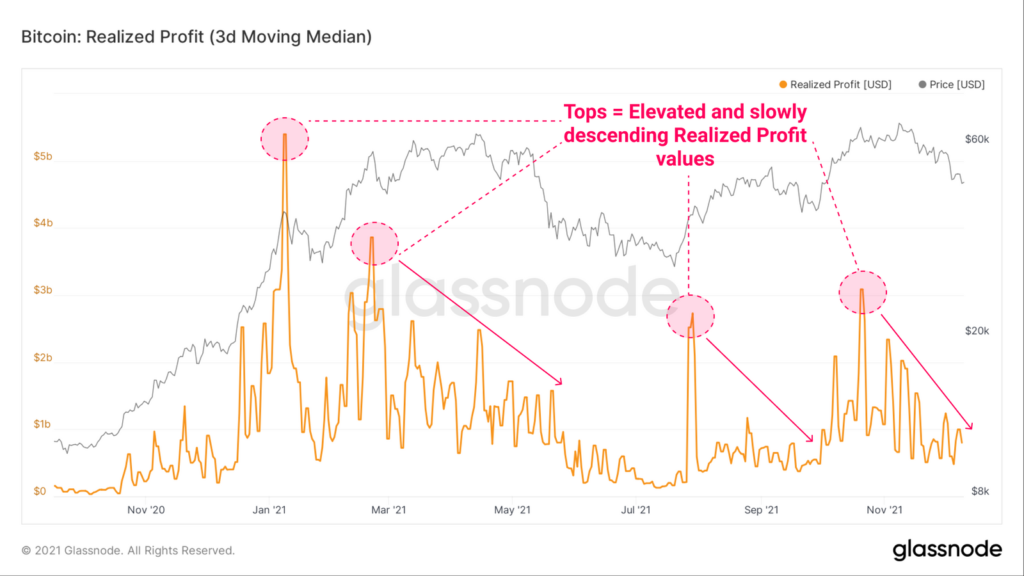 Where is Bitcoin price heading next?

As a reminder, the investment director of Bitwise Asset Management questioned Bitcoin's ability to reach $100,000 by the end of the year.

Earlier, the author of the Stock-to-Flow PlanB model admitted the insolvency of his own "worst" scenario, according to which the rate of the first cryptocurrency was supposed to reach $98,000 in November. Before that, Huobi analysts expressed a similar opinion.

In December, the founder of Ark Invest pointed to the buying potential of institutions that could push bitcoin up to $550,000.

US stock market continues to climb

Meanwhile, the S&P 500 and Nasdaq Composite rose 3.8% and 3.6% over the past week, their largest since early February. The growth comes despite reports of inflation in the US rising to a maximum in 40 years, which, in turn, could push the Fed to curtail its crisis stimulus measures. The Dow Jones interrupted the four-week drop with a 4% rally, while Bitcoin, which had declined for three straight weeks, surged 1.2%.

“The resumption of accumulation amid zeroing risks in traditional markets probably indicates investor confidence that most of the negative news has already been reflected in prices and that the path of least resistance is upward,” writes CoinDesk analyst Omkar Godbole.

Risk assets declined in the second half of November and early December amid unrest over the omicron coronavirus strain and statements by Fed Chairman Jerome Powell about a possible tightening of monetary policy.

“We know the Fed is going to maintain their hawkish stance given last week’s inflation numbers, but the critical question is to what extent. We will not be expecting any major surprise as most analysts are aligned towards a faster pace of tapering,” said Lennard Neo, head of research at Stack Funds.

“Traditional markets have shown some resilience the past few days, and this should reduce further downside strain on the crypto markets, at least in the near term,” Neo said.