#Bitcoin has traded into a narrow price range for over 2 months, as more traders move risk neutral cash-and-carry positions.

But derivatives markets are now pricing in a high volatility move just over the horizon.

Read our analysis in The Week On-chain👇https://t.co/cyTLZGqfCU

The implied volatility of the Bitcoin options market has exceeded the range of 60% -70% in the last two months. Previously, similar dynamics were observed on the eve of the collapse in May 2021 and during the liquidation of short shorts in July and October. 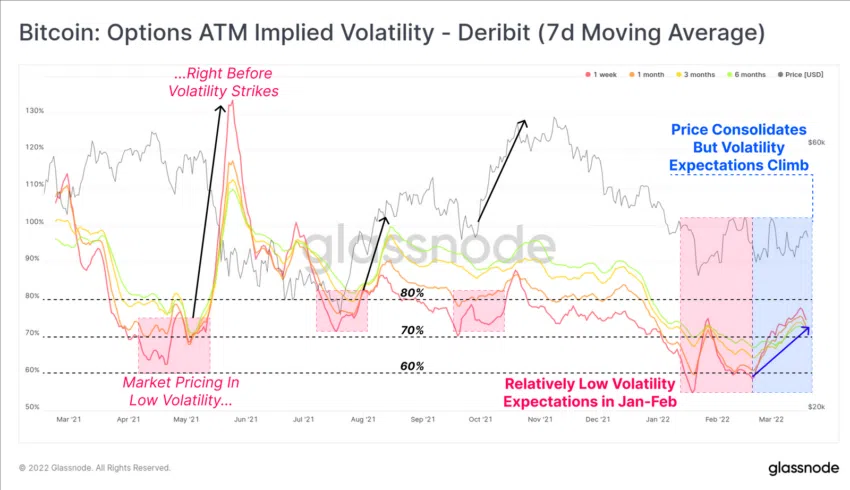 Open positions in the futures market

In the Bitcoin futures market, open positions (OI) reached 1.94% of the capitalization of the largest cryptocurrency. Previously, exceeding the 2% threshold led to a sharp decline in leverage.

A similar pattern appeared on the perpetual contracts market, where OI of 1.28% of the total market value of BTC entered the "risk zone".

Buyer activity is concentrated in the USA and Europe

According to experts, the greatest activity of buyers on the spot market is concentrated on the US and European markets. In turn, the seller's pressure builds up during the day in Asia.

Similar trends have been visible since 2020. Experts attribute the reaction of Western traders to the ultra-lenient monetary policy of the Fed and the ECB, which has led to a reduction in the purchasing power of Fiats. In the predominance of sales by their Asian opponents, they saw restrained expectations due to the impact of the COVID-19 pandemic and the liquidation of longs after active top-shopping in October and November 2021.

At the moment, the on-chain indicators point to a bearish market. The number of new BTC addresses is growing at a rate of ~ 110,000 per day, which is evidence of a moderate increase. The same applies to the number of transactions: the 14-day moving average is 215,000, which is lower than the typical values ​​for 2019-2020.

The proportion of large transactions ($ 1 million or more) has increased from 50% in 2021 to 65% -70% today. Experts warn that, in the face of declining overall volume, this signals a bearish scenario. 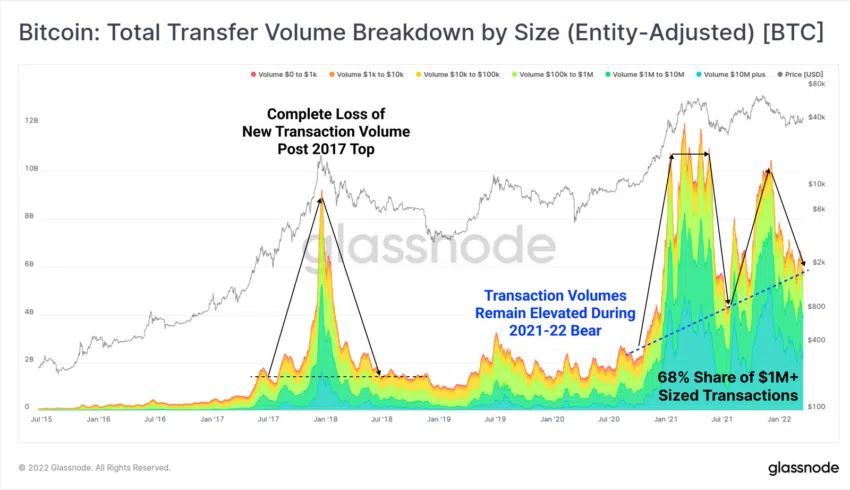 Amount of coins held by the Hondlers

The amount of coins held by the Hodlers has not changed after it hit a record high in October. Analysts concluded that the hoarding of Bitcoin by long-term investors during this period was offset by their spending.

From January onwards, the number of coins with the last transactions of three to six months - potentially eligible for the hoarder category - began to increase. During this period, the number increased by 480,000 BTC, almost to 510,000 BTC accumulated in the period after the collapse in March 2020.

If such a trend persisted, it would indicate a reduction in the price sensitivity of this part of the aggregate supply of Bitcoin. It would be uplifting for the bulls.

Previously, Nigel Green, head of the DeVere Group, predicted the original cryptocurrency would rise to $ 50,000 in March.

Nigel Green is expecting Bitcoin to hit $50,000 this month, amid rising geopolitical tensions and growing institutional investments. Do you think the crypto coin can reach the $50k mark? #PressRelease https://t.co/if2rESEzdY