Get VIP Trading Signals Market Watch
Trade Now Your capital is at risk.
Elon Musk, the CEO of Tesla and SpaceX, became Twitter's largest shareholder after purchasing a 9.2 percent stake of the microblogging service on April 4. However, that is no longer the case, as Vanguard group bought a 10.3 percent stake in Twitter, making it the largest stakeholder in the San Francisco-based social media company.

Vanguard now owns 82.4 million shares of Twitter, or 10.3 percent of the company, according to the most recent publicly accessible filings with the US Securities and Exchange Commission (US SEC).

Based on the closing price of Twitter stock on Wednesday, Vanguard's holdings are now worth $3.78 billion, according to the Wall Street Journal.

WSJ said, “ Vanguard isn't making a directional bet on Twitter…Instead, the majority of its assets are in index and other so-called passive funds. The firm often sides with management on voting issues and doesn’t advocate for changes like a hedge fund or activist investor might.”

The Vanguard group owned approximately 70.4 millions Twitter shares as of December, which accounted for 8.8 percent of the outstanding shares.

Elon Musk is, on his own, Twitter's biggest individual shareholder. The company's co-founder Jack Dorsey came in second place among individual stakeholders.

But the world richest person didn't stop after acquiring 9.2 % of Twitter shares. He made an offer to buy 100% of Twitter's shares. He offered $43 Billions for the remaining stocks. Though he expressed that he is not sure whether he will be successful in acquiring it.

“I am not sure that I will actually be able to acquire it," the richest person in the world said Thursday during a TED talk in Vancouver. However, he added that he has another plan B in the event that Twitter refuses to accept his proposal and he did not provide any further specifics. 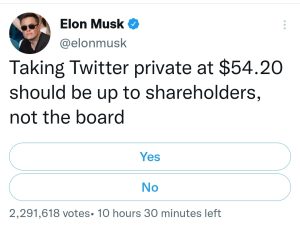 “I invested in Twitter as I believe in its potential to be the platform for free speech around the globe, and I believe free speech is a societal imperative for a functioning democracy," Musk wrote to Bret Taylor in a letter, chairman of Twitter board.

Twitter, Inc. confirmed it received an unannounced proposal, which is not binding on Elon Musk to acquire all of the outstanding common stock at $54.20 for each share of cash. “The Twitter board of directors will carefully review the proposal to determine the course of action that it believes is in the best interest of the company and all Twitter stockholders," the company added.

Will Twitter Board's accept the Deal? Or Will the board consider using the 'poison pill' strategy?

A report says, twitter boss said, they are still considering the 43 Billions offer made by Musk. Will they consider a 'poison pill' strategy to protect the company from a hostile takeover?

What is Poison Pill?

A poison pill, also known as a shareholder rights plan, is a type of defensive strategy used by a company to protect itself from potential hostile takeover bids. This may sound like something out of a movie, but it is actually a very common occurrence in the business world.

A poison pill typically takes the form of a rights issue, in which the company offers its shareholders the opportunity to buy additional shares at a discounted price. This has the effect of diluting the shareholding of any potential acquirer, making it more difficult and expensive for them to take over the company. In some cases, poison pills may also include provisions that make it more difficult for an acquirer to sell off parts of the company.

Let's see if the Twitter board accept the deal or take 'poison pill strategy.