A Dogecoin holder David Suski has filed a lawsuit seeking $5 million in damages from Coinbase because of an allegedly misleading campaign.

July 20, 2021, | AtoZ Markets – A Dogecoin holder has initiated a class-action lawsuit against the Coinbase crypto exchange, accusing it of vaguely establishing the rules for the drawing of the cryptocurrency.

David Suski has filed a complaint with San Francisco federal court about the Trade Doge Win Doge contest on Coinbase, in which he had to invest $100. According to him, he would not have invested this amount if Coinbase had made available a free opportunity to participate in the competition.

According to the lawsuit, the marketing firm hired by Coinbase used “inaccurate and misleading” practices to hide the possibility of free participation. The plaintiff provides a screenshot of the announcement, in which the link to the rules of the drawing is presented in small faded print. Contestants were offered the opportunity to win the $300,000 grand prize, as well as one of several prizes of $30,000 and $100. 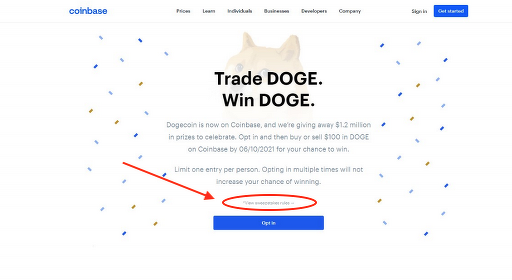 By law, when conducting such sweepstakes, companies must provide an opportunity for free participation, which in this scenario was realized by sending a card with the user's name, address, and date of birth by mail. In many cases, however, organizers prefer to attract participants in other costly ways.

Suski argues that Coinbase inappropriately hid the possibility of free participation in a bid to increase liquidity on the exchange. According to him, the company could not fail to realize the fact of the violation, since it had previously raffled off $2 million in bitcoin in a similar way. The Bitcoin draw, however, required only registering an account on Coinbase to participate, whereas, in the Dogecoin story, users were motivated to invest $100 to “make a deal” with the newly added cryptocurrency.

Suski is a consultant at Bank of America, according to his LinkedIn profile. He claims that he already had more than 1,000 DOGE, which he bought through Robinhood, and would not invest further in cryptocurrency if he knew about the possibility of free participation. The user accuses Coinbase and the marketing firm of violating California unfair competition and misleading advertising laws. He estimated his own damage and damage to other participants in the campaign at $5 million.