Following a lengthy and complicated investigation, CySEC fines Bank of Cyprus and a number of its executives $700,000 for numerous violations. What now for Bank of Cyprus?

4 December, AtoZForex – The Cyprus Securities and Exchange Commission (CySEC) has issued an EUR 595,000 (USD 708,000) fine for the Bank of Cyprus Public Company and its ex-CEO. The other ten executives were also fined in connection with the accounting disclosure failures along with other violations.

The Cypriot watchdog has imposed the fines after concluding its investigation into the breaches by the firm and the related parties. According to the official CySEC announcement:

“The Board of the Cyprus Securities and Exchange Commission (‘CySEC’) wishes to inform the public that it has investigated the compliance of:

Bank of Cyprus Public Company Ltd, its Board of Director Members’ and its General Manager with the Transparency Requirements (Transferable Securities Admitted to Trading on a Regulated Market) Law of 2007, as amended regarding the adequacy of doubtful debt provisions in the Annual Financial Report of the Company for the year ended 31.12.2011.”

Following on this, the CySEC has decided to impose fines on the companies and its executives. Please see the total fine breakdown screenshot below. 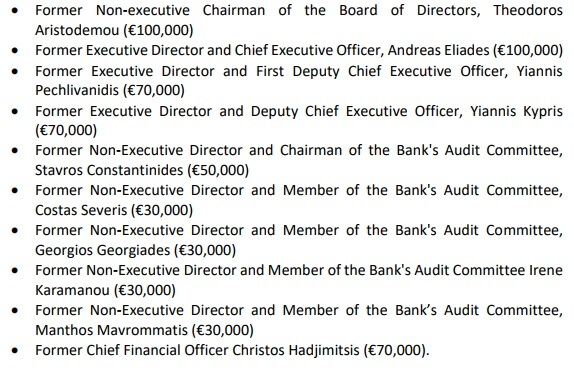 In addition, the CySEC announcement noted that the ruling is related to the transparency requirements in regards to the information about doubtful debts it the consolidated statements for the year 2011.

The CySEC has further explained that the Bank of Cyprus did not carry out the required accounting actions in order to tackle the loan impairments of at least €362 million. Due to these misses, Bank of Cyprus had to increase its total losses by the respective amount. The bank also should have decreased its equity by this figure, which would result in the overall reduction of the capital adequacy to at least €1.9 billion.

Following these breaches, CySEC has stated that the organization and its executives “did not provide a true and fair view of the Company’s financial position.” As CySEC fines Bank of Cyprus, the chief of CySEC, Demetra Kalogerou, has commented on the case:

“This announcement follows an in-depth thorough investigation by CySEC into management actions taken at the Bank of Cyprus in the period leading up to the Cyprus banking crisis. The Bank of Cyprus and its former directors failed to adequately disclose the true nature of its clearly worsening financial position in 2011, which had a direct and negative impact on the course of the unprecedented banking crisis in Cyprus in the years that followed.

The Company’s management had a fiduciary responsibility to ensure adequate provision for bad loans – a fundamental accounting procedure which they did not uphold.”

Also, CySEC Bank of Cyprus investigation is related to the goodwill of the named officers of the officers in Bank of Cyprus’s financial statements. The scrutiny was complicated and time-consuming, according to Mrs. Kalogerou.