Get VIP Trading Signals Market Watch
Trade Now Your capital is at risk.
The Polish cryptocurrency exchange Bitmarket has just shut down and amid exit scam claims, without any prior notice.

July 9, 2019 | AtoZ Markets -  The exchange had published late June 8. “We regret to inform you that Bitmarket.pl/net ceased its operations. That is due to the loss of liquidity, from 08/07/2019. We will inform you about further steps.” Poland’s second-largest crypto exchange, as claimed, did not clarify what caused that “loss of liquidity,”

Bitmarket has just shut down amid exit scam claims. However, a Redditor said in a post that the exchange might have been following the old trend. That usually takes place prior to closure, explaining that the “red flags” rose included users being forced to change their passwords without explanation. That is along with halted withdrawals over unusual additional “know-your-customer procedures.”

The exchange denied all the claims regarding its hack. There are still marks that indicate such an incident. 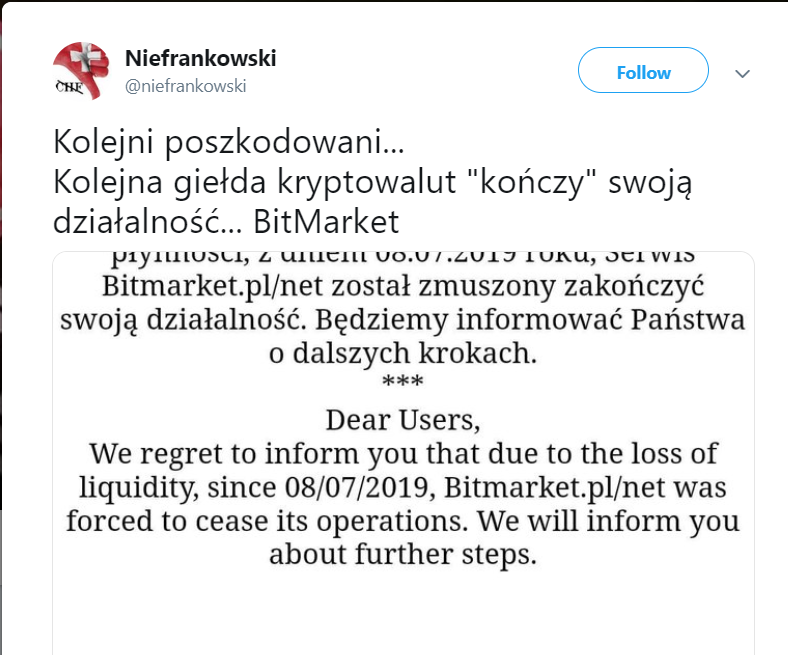 The exchange users’ testified that over the last couple of weeks. They prompted to make several changes to their accounts, without the management explaining. Why was that being asked for? Users were asked to change their accounts’ passwords, while their API keys had been changed as well.

That was a few days after with a message. That reads: “The level of verification of your account on BitMarket.pl is insufficient about the Act on Counteracting Money Laundering and Terrorism Funding. Please go to the ACCOUNT/VERIFICATION tab and complete the account verification process.”

The message scared the users, and therefore, they felt an immediate need to withdraw their funds from the exchange, seeing the message as a big red flag of fraud, as per some users.

What was noticed is that the exchange prevented some users from withdrawing their funds. Until they complied with what asked for uploading an accepted identification document, ID, and personal photographs with the user holding their ID. All in addition to a note says that the cryptos they were purchasing on the platform. That was a “personal investment.”

It is worth mentioning that AtoZ Markets did fierce endeavors to reach out to Bitmarket’s management. We try to understand from them directly what happened and what pushed them to shut down all of a sudden in such away. However, no one of them responded to our calls.